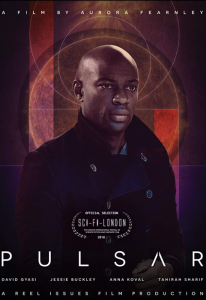 Jonah (David Gyasi), an intergalactic peacekeeper, has refused his latest assignment – to help the people of the warlike planet Ninevah, which is under threat.

Yes this is a retelling of the Bible story Jonah And The Whale, in which Jonah refused God’s instruction to take his message to the godless city of Ninevah and was then swallowed by a whale.

Writers Neville Pierce and Aurora Fearnley (she also directed) are happy to make this link obvious, though it’s also an interesting and entertaining science fiction short in its own right. (You can watch the whole film below.)

The Council which manages Jonah is furious, telling him his many previous successes now count for nothing. “They deserve to be warned. Everyone deserves that chance,” a councillor tells him, though this massive tension between Jonah and the Council, both of whom are acting from the best intentions, isn’t really explored. (The 15 minute running time means that intriguing differences thrown up by the new setting don’t tend to be addressed.)

You could argue the Bible is one of the oldest sci fi novels, and religion and science fiction work well together. Space (the heavens!) is dangerous and we often revert to our old comforts in times of stress; its depiction frequently drips with the imagery of creation, destruction and new Edens, and there’s often a subtext about mankind’s hubris in thinking to play god.

Unsurprisingly nods to religion and a higher power abound in Pulsar, with the supernatural an explicit explanation – both a strange kind of comfort to a group of people resorting to almost medieval beliefs, and a massive threat. (The Council is analogous to God here, though I assume it’s simply a scientifically advanced civilisation that can act in ways that we would consider miraculous.)

Jonah has bought his escape on a rather rickety old spaceship, a mining facility crewed by ex-prisoners who’ve served their sentences – “they don’t give high-grade ships to ex-cons”, says crew member Cassa. (The captain of the ship, Blake, is I hope named for Blake’s 7, the 70s BBC science fi series where a group of criminals, convicts and freedom fighters fought against an oppressive Federation.)

A massive solar storm is buffeting the ship, threatening everyone on board, and quickly Cassa (Jessie Buckley) is suggesting it’s supernatural in nature, brought about because someone cursed is on board.

Gyasi and Buckley are excellent; Gyasi in particular brings a Shakespearean quality to his dialogue, giving an utterly compelling performance as the newest and least-trusted passenger. I liked, too, Kile (Tahirah Sharif), the terrified crew member pleading to anyone who’ll listen that she’s paid her dues (the Council is wonderfully Old Testament, both loving and brutally immune to desperate begging).

Fearnley has spent her budget well; the hulking spaceship looks industrial and workaday, and from the outside is convincingly massive; the planet is other-worldly. The colours are stunning, orange, blue and grey.

While Pulsar follows the basics of the Bible story pretty closely, its gloomy space-age setting gives it some new and interesting layers, even if there isn’t always time to examine them – and crucially means that while we think we know what is going to happen, we don’t know how.