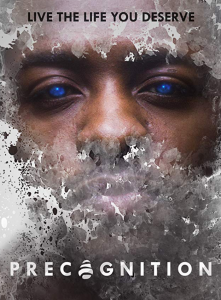 A battle rages in a wood, as soldiers on the ground engage in a futile struggle against an airborne assault. It’s a noisy, jarring introduction with screams and explosions.

But most striking is writer-director Luke Tedder’s disjointed and disruptive filming of the fighting – leaving us the audience as disoriented as the soldiers being attacked.

James (Adam J Bernard) is one of those soldiers, under attack in that wood, back in 2042. Next we’ve jumped forward a decade to 2052, and not only does James have a whole new life, he can’t remember the old one.

It’s a near-future setting that works particularly well for low-budget sci fi – technology has continued its race forward but towns and cities are still standing. Progress is development, not a complete throwing out of the old and rebuilding the new. And thinking 25 years ahead, it’s not so much of a stretch to imagine technological advances that appear benevolent but require us to hand over so much of ourselves.

Tedder has made British sci fi thriller Precognition on a tiny budget of under £15,000, some of it raised via a Kickstarter campaign. (I found out recently that budgets this small are known in the industry not as low or micro budget, but zero budget.) And he’s made his money go a long way.

By 2052, everyone is linked to Cryus, a super computer with a human hologram to play to our trusting natures. (I say everyone – it’s not clear if this is a UK-only programme, or if since the war, of which that battle was a part, the technology has taken over the world).

Thanks to the universality of retina implants, citizens have bright blue eyes, and a device in the backs of their necks (I liked the use of the eyes – they’re meant to be a window on the soul, yet here they are beautiful and identical, and signal a herd mentality). People can talk to each other in their heads, or out loud using speech. Life is lived half in the real world and half in virtual reality.

Samantha (Vanessa Russell) works for Ripe Technology, a company set up with the best of intentions. She manages the Life Fulfilment Department, where she and her staff make decisions for people’s future lives based on their past behaviour. It’s called a Karma Scale, a clever and interesting example of “be careful what you wish for” – society-approved groupthink retribution.

Samantha and her new assistant-in-training wander through a virtual reality countryside, stopping to assess people who stand there frozen, sometimes mid-action. A man whose wife abuses him daily stands as if paused, while she is mid-scream and the droplets of a drink she’s throwing at him hang in the air. He’s had an affair with a neighbour. Punishments will be meted out, memories wiped, new partnerships “above 70% compatibility” will be imposed. (Interestingly the neighbour is punished for the affair; she’s judged to be driven by lust and likely to do it again. The man she has an affair with is not.)

Samantha is married to James, the soldier from that early woodland skirmish. They love each other, their 93% Partner Compatibility Certificate taking pride of place at home. But soon James is plagued by visions, often when he’s within an app, or virtual reality. Are they his repressed memories? Or a malfunction?

Actually there is at least one person who could still be living off-grid: Georgia Hemingway (Jessica Andrews). Freeform groups, the stragglers refusing to succumb to the new technology, were thought destroyed years ago, though Georgia was never caught.

People are constantly being watched; every outdoor scene has some kind of drone in the background, flying up from behind a building or through trees (with their snout-like nose cones they look like elephant seals, creatures we consider to be unthreatening and cute).

As James faces up to the emotional trauma of these unknown memories, Samantha tries to help him – which means stepping outside her technologically-created comfort zone and questioning everything she’s worked for. It’s a situation which takes her to Georgia, battle-hardened and driven.

Adam J Bernard is terrific as James. His portrayal of the ex-soldier’s emotional disintegration is harrowing; and he’s utterly believable facing the physical ordeals he has to go through from the very first scenes. I also really liked Jessica Andrews as Georgia – she’s a gritty, wary, wiry fighter who’s had to lose any of the softness of her middle class upbringing. Gareth Lawrence, too, is impressive as Peter, one of the original scientists behind the technology, who effectively sells his soul.

And kudos to the make-up people. James’s amateur removal of a device implanted inside him is gruesome (and squelchy!) but very believable.

The special effects are good – a few years ago I can’t imagine many indie directors would have felt able to include a scene involving a sky filled with futuristic attack planes. Occasionally the lack of budget shows, but not often; and sometimes the acting isn’t quite there.

The issues raised by Precognition aren’t new, though Tedder is thoughtful in his examination of them. They’re also our current Big Questions. We struggle to deal with the implications of technologies far younger than us, that we never envisaged: our slavish devotion to, for example, the internet and social media, and what we willingly give up for access, without really knowing the value of what we’re offering in exchange; and in a more obviously brutal way, war being used by leaders to make us accept curtailments on our freedoms.

There are some gaps, and I also found the the explanations of the secret Dreadnought programme, and the fightback against the technology, muddled. But he poses some timely conundrums.

Ripe Technology positions itself as a benevolent dictatorship. Samantha and her team see themselves as guardian angels. Like Ray Bradbury’s Fahrenheit 451, set in a dystopian future where only three books are allowed, the assumption is that people are happier this way.

Most interestingly to me, Precognition also highlights – whether deliberately or not – that cognitive dissonance we seem to be collectively suffering from nowadays: we constantly stress the importance of individuality and identity, rejecting class analysis for individual autonomy. Yet we act en masse like lemmings: social media pile-ons, fads, short attention spans that result in fast celebrity followed by obscurity.

Technology itself is morally neutral. But Tedder has done a good job showing us how easily it can be twisted, and how a combination of carrot and stick can make us give up our most basic freedoms.

Precognition will be released on VOD via Amazon Prime in August 2018.


Watch the documentary about the making of Precognition: