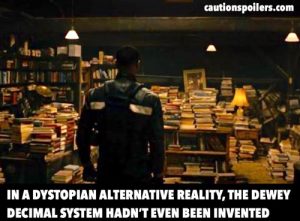 I love the initial minutes of dystopian storytelling; how a society got to this point, the new realities of everyday life, and the capacity of the human spirit to absorb horrific change without challenging it.

How much do they agree? How much are they hoping someone else will save them? Or maybe they just don’t care that much?

This is a slight film, made for HBO, which proposes huge themes without exploring them properly. But I enjoyed it despite its shortcomings. An adaptation of the Ray Bradbury book published in 1953, it still resonates, though the Trump allegories are heavy-handed.

In this future America, a second civil war has resulted in the decision to ban books for the sake of people’s happiness; a decision helped by a compliant population with short attention spans, barely even registering the day’s headlines.

The head of the firefighters unit, Captain Beatty (Michael Shannon), lectures schoolchildren about the evils of books. As he states confidently that when they are grown up there won’t be any left, I wonder if that might turn out to be true for my children.

I don’t own many physical books. Not because I don’t read (though post-babies, I’m still living on literary credit from voracious reading in the decades pre-kids), but because I mostly buy digital copies now.

They’re still books but something has been lost – in one scene someone actually sniffs a book. Sniffing a Kindle is going to make people look at you the way the population in Fahrenheit 451 looks at possible Eels, secret readers and book hoarders.

This isn’t an entirely book-free society. Three books are permitted: The Bible, To The Lighthouse and Moby Dick, and I’ve read one and a half of them. (Sorry, God and Virginia Woolf.)

Guy (what an everyman name) works in Beatty’s unit. It’s their job not to put out fires but to create them, wherever they find a stash of illegal books (the title refers to the burning temperature).

A question mark hangs over Beatty’s motivations. Fascinated by what he finds, he’s like an ex-smoker running his finger up a cigarette testing himself against temptation. Or maybe he’s simply trying to entrap Guy (Michael B Jordan).

People discovered with books can be deleted, left with no identity. Life is ordered and marshalled, by news reporters projected onto skyscrapers and Yuxie, an all-seeing tech system in every house and workplace.

I did love the reference to my favourite martyr quote (not that I have a scale, that would be weird) about lighting a candle that will never go out, said by Bishop Latimer to Bishop Ridley as they were burnt at the stake in 1555. (I will pedantically remind Beatty that it wasn’t the Brits that killed them but the English, Scotland still being an independent nation then. Fake news, Beatty!)

The line is uttered by a “tumor Eel”, one of the secret book lovers keeping literature alive. Her self-immolation, and the bonfire of her books, is streamed live onto huge screens in the streets.

But ban something and its value shoots up. His curiosity piqued, Guy can’t help taking a book. It acts as a calling card to suspicious Eels that he’s genuine, in this case as he tries to befriend Clarisse (Sofia Boutella).

She’s an Eel but also an informant, in return for a reduction in her own sentence. As his childhood memories surface, she gives his questioning structure. Guy’s a man who has always been hiding something, and it’s only a small step for him to go rogue.

Eventually she leads him to a compound where a group of Eels live, memorising books.

They have scientists too, altering DNA to act as a repository for art and literature and spread it worldwide. But you can’t make someone care about Michelangelo or Maya Angelou. All you can do is create a barrier-free environment fertile for thought and which values these things.

You’ll be drooling over the discovered hideyholes of banned books; sometimes huge rooms crammed floor to ceiling with classics. They reminded me of my dad’s study growing up – towering piles from 19th century novels to 20th century political tomes and everything in between, always about to topple over. Who knows what treasures were lost to my family under a dogeared copy of War & Peace, or a hefty Encyclopedia Britannica?

Literary and learned it may have looked, as dislodged dust swirled through streaming sunlight, but try finding a specific book. Easy for my academic father with his photographic memory (“half-way along that shelf behind the hole punch, the apple core and the pair of your sister’s socks”) but not for the rest of us.

I mention this not just because I like reminiscing about my dad. Books aren’t just the stories within, but also the memories and associations they create, paths to other places. That doesn’t really come across in this adaptation; rather it sets up several pathways that remain unexplored.

The number of world languages has slumped to 60, though Canada is mentioned and appears to be a beacon of democracy (I can’t imagine any book more devastatingly bleak than one depicting a dystopian Canadian future). Which parts of the world are still printing and publishing? How isolated is America or has its descent into totalitarianism occurred as part of a worldwide lurch to the Right?

The Nine raises questions. Their version of the Internet, it’s heavily regulated, hosting the acceptable books. I imagine they’re making a point about the manipulation of a space which was supposed to promote free thought. But kids in basements are often more tech-savvy than governments so I don’t believe dissent could so easily be suppressed underground even as the media gave way.

These modern updates are rather clunky and unnecessary; the themes of dystopian classics can be understood without new settings.

Jordan makes as much as he can of what is an underwritten and thin role. Shannon is brilliantly buttoned up in every sense, though he doesn’t delve too deep. Both are, of course, eminently watchable.

It all looks rather Blade Runner-y, though it is set in one city in Cleveland. The last scene will leave a lot of people chortling but despite my reservations over both the movie and the Eels’ methods, I rather liked it, and its sense of hope.