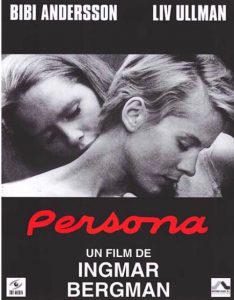 Having watched The Seventh Seal last week – my first Bergman movie – and managed some semblance of understanding (with help I hasten to add!), tonight I was ready for Round 2.

And I have to say I’m still chin-stroking, and I came out of the cinema six hours ago. In that time I could have watched the film again four and a half times (it’s a short but complex 80 minutes). Maybe I should have?

Persona is a film you probably have to put your own stamp on, unless you want to feel like poor Nurse Alma (Bibi Andersson, Mia in The Seventh Seal). Brought in to care for Elisabeth Volger (Liv Ullmann), a recently mute actress, Alma changes from a sweetly bouncy young carer to an obsessed, troubled woman; by turns angry and sad, fighting a blank canvas.

As their relationship deepens Alma finding she’s taking on Elisabeth’s personality, though the actress also seems to be reflecting back Alma on to herself.

Probably because of her profession, Elisabeth’s lack of speech proves no barrier to influencing Alma. And all the while poor Alma is unaware how much this influence is of her patient’s own volition and how much from within Alma herself.

Alma even talks to herself (out loud) about what is inside her. She is going to marry Karl-Henrik, a trainee doctor. They will have babies: “All that is decided. It is inside of me”. Later she describes to the actress an incident where she and another woman were sunbathing nude and ended up having sex with two strangers. Alma then had sex with Karl-Henrik, and became pregnant – something else inside her – and had an abortion.

Elisabeth has also been pregnant; she has a son. She tears up a photograph of him, and later Alma delivers a devastating riposte to her about how much the actress hated the baby when she was pregnant, and longed for its death. Projection or absorbing Mrs Vogler’s personality and memories?

On the surface the two women don’t look similar. Alma is pretty with short blonde hair and cute features; Elisabeth is beautiful with chestnut waves, her looks as quietly imposing as her silence. But later we see a photograph of them made up of half of Alma’s face and half of Elisabeth’s and there is little to choose between them.

Initially Alma nurses her patient in some kind of clinic. The doctor (Margaretha Krook), is mostly an off-camera disembodied voice, balancing out the silent and visible Elisabeth. Later, when Mr Volger (Gunnar Björnstrand) arrives, he too is initially heard only off-camera as Alma talks to him.

No one is making much progress in the clinic so the doctor suggests Alma and Elisabeth travel to a beachside cottage for a change of scene. Once there they walk, cook and write, while Alma talks at the actress. Personally that sounds like heaven – all my favourite hobbies plus being able to chatter away with no interruptions from the object of my affection – though for Alma it’s a tricky navigation.

The isolation of the cottage and the sheer loneliness of talking to someone who never responds (but for the occasional laugh) takes its toll. Maybe Alma is having a breakdown; maybe she and Elisabeth are morphing into one, an actress taking over another personality rather than simply using someone for their performance.

Silence is extraordinarily powerful for the quiet one and (no pun intended) hugely disquieting for the talker. Whether face-to-face, online, or over the phone, it gives all the control to the silent party. I long ago realised that simply not replying is often, ironically, the most forceful response.

Does Alma want a response? Occasionally, and certainly at the start. But soon they settle into their relationship. Physically they are often very close, cuddling up to each other. Elisabeth is the protector here, a silent mother who envelops her child but maintains an adult aloofness. And they fight, a communication of sorts, if a last resort.

This is a very jarring film. Not just because of Alma’s one-sided conversations, teamed with our uncertainly of exactly what her patient might be capable of. But also because of the scenes that interject. The film begins with disjointed and sometimes horrifying images: a giant spider; a cartoon; a boy waking under a white sheet, faced with a huge image that could be both women; a nail driven into a hand. The film itself even seems to melt. It’s very meta and makes us question what is real, especially when we see footage of Alma / the actress playing Alma, being filmed.

Sven Nykvist is again Bergman’s cinematographer; he’s created a very beautiful film that looks very chilly, with its grey beach pebbles and black-clothed women. It is starkly calm and pared back, until a brutal TV news report about a man self-immolating himself on the streets of Vietnam during a protest. Whoever took the footage dwells on the man as he burns, and at last Mrs Volger shows some emotion: fear, something we only see once more from her.

I imagine if I watched Persona again I’d take away something completely different. How can a film about identity not absorb your thoughts about your own? It has a look similar to The Seventh Seal, though it has none of that humour (that’s not to say either Bergman or Elisabeth Volger aren’t laughing at us though).

Our first sight of Elisabeth is a flashback to the night she stopped speaking during a performance. She’s in her stage make-up, a thick, exaggerated mask. It’s a transformation, and Alma uses the language of transformation frequently: “I think I could turn myself into you… inside…”.  And “was I two people?”

Towards the end, regaining her own volition, the  nurse realises: “reality is bloody-minded… life seeps into everything”. Poor Alma. She has tried work out who she really is, and ends up with the essence of someone else seeping in to hers.