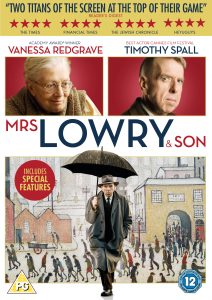 It’s 1934, and LS “Laurie” Lowry’s debt-ridden father has been dead a few years. Laurie, rent collector by day and attic artist by night, is slowly paying those debts off, while still living at home with his belittling, bed-ridden mother Elizabeth.

Adrian Noble’s film, adapted by Martyn Heasford from his own play, is a fascinating if sometimes repetitive account of a tumultuous and painful relationship between mother (Vanessa Redgrave) and son (Timothy Spall), its explosions and dampening downs all taking place within the confines of a Lancashire terraced house (the screenplay’s stage origins are clear).

The big story is that Laurie has been contacted by an art gallery owner in London, who wants to see more of Lowry’s paintings with a view to an exhibition. His delight is tempered by an acceptance that he must tiptoe round his mother, looking for the right moment to tell her, hoping she’ll be impressed. She’s not.

Redgrave and Spall grasp the terror and freedom in an invitation from the outside world, and they’re perfectly, evenly matched – he suppressing and she expressing – as this sad, odd couple.

Lowry was a modest man (he turned down several honours in his lifetime), his career in the doldrums until his mother died. Best known in popular consciousness for his scenes from the industrial north-west, and those matchstick men, his paintings now sell for millions. In Mrs Lowry & Son Laurie is in his late 40s, but looks like an overgrown schoolboy with his hair very short at the sides and almost-quiff like on top.

Their relationship is claustrophobic and smothering, though their house is anything but. It’s actually rather nice, even if not to modern taste, with muted tones of cream and brown and pink, and would be perfect were it not for Mrs Lowry on a throne of plumped-up pillows in its midst.

Her domain is the first floor; his demeanour stiffens every time he climbs the stairs in response to her peevish call. Downstairs in the parlour, and up in his studio where he creates his masterpieces in a paint-spattered suit, he can relax.

Mrs Lowry is Hyacinth Bucket wrapped in a spotless satin eiderdown encased in an obsession with being middle class. She’s critical of what she considers working class ways, and desperate for approval from those she considers proper.

Her complaints are frequent, pithy and initially amusing, though while her lines start off eminently quotable – “I haven’t been happy since 1868” she moans, a full 66 years later – soon, revealing the shallowness of her thinking, she comes across as desperate, mean-spirited and sad.

She takes delight in reading out a bad review of his painting Coming From The Mill: “an ugly painting… appears to have been painted by a child.” Amid all this demeaning chatter, he simply describes himself as a man who paints.

And in among the decades-old whinges are more recent slights. She blames their recent enforced move from the space and cachet of genteel Victoria Park to a small terrace in Pendlebury on her husband and son. 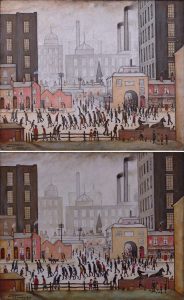 Coming From The Mill: Lowry’s painting above, with Frank Gray’s copy made for the film, below

We barely see the artist actually painting, but flashbacks and outdoor scenes are explanatory stand-ins, showing the subjects of his works and the colours he worked with.

We’re taken back to Laurie’s youth, Mrs Lowry elegant and attractive at her piano (she had dreams of being a concert pianist) or running with her son along a beach. One flashback includes a small dog who looks as unimpressed with her husband and son as she is (presumably an in-joke as the artist was well known for painting dogs).

These flashbacks are sometimes too much filler, the beach scenes sentimental; though they make a change from the seemingly endless conversations in her Pendlebury bedroom, eating their dinners on trays.

The delightful if brief interludes when he’s out in the Lancashire streets also reference his paintings: real people pause en masse while he walks around them, and crowds of local children play Grandmother’s Footsteps with him, stopping still when Lowry turns around, laughing.

Redgrave is scarily good as she teases out the nuances of their relationship, Elizabeth manipulating Laurie from her bed, as time goes by becoming disturbingly coquettish with her only son. It plays out like a married couple in an emotional abusive relationship. He’s desperate for approval but scared to tell her of his successes, trying to pick his moment before sharing the news. Spall is excellent, a diminishing man aware of his own worth but still seeking his mother’s approval.

Sometimes it’s less one-sided. He too knows how to needle, leveraging his housebound mother’s desperation for news and gossip (Lowry was actually well-known in real life for telling a good story). After spotting a woman with a beard on a bus, he tantalises his mother with titbits, while she almost salivates for more, disgust at the picture she’s created in her mind as strong as her inquisitiveness. Then they diverge again, her boringly conventional ideas of what can be beautiful stopping her in her tracks. Laurie, meanwhile, sees it everywhere: “There’s a beauty in everything, a man just has to open his eyes and look” he says.

Occasionally she stops her frantic manoeuvres and machinations to utter some truths. “Life at the beginning had so much promise, so much widens” she says with regret. It’s a broad canvas she has deliberately shrunk for both of them, so he cannot be himself until she’s gone.

I recently attended a Lowry painting class with artist Frank Gray, who painted six “Lowrys” for the film. Read my “how to” guide, and my interview with Frank.