You are here: Home / Film Articles / Lowry and me: a match(stick) made in heaven?

Me: Northern, got a C for Art O’Level in 1987, famous for making scenes, likes to blow my own trumpet, I put my painting on social media and let’s be honest, no one offered me anything.

What could possibly go right? 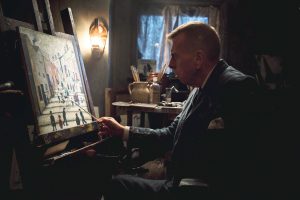 The gulf is wide between me and Lowry. While my sister inherited the family artistic gene from our mum and grandfather, it seems to have passed me by, unless we include the Lego Ninjago birthday cake I made my son last year.

But sibling rivalry runs deep, so when I was offered the chance to learn how to paint like Lowry, I jumped at it. 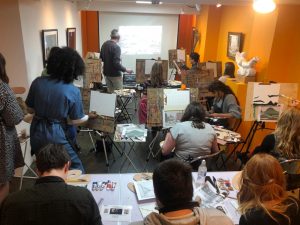 That’s me in the corner, top left

The class was to help promote the DVD and blu-ray release of the film Mrs Lowry & Son. Directed by Adrian Noble, it stars Timothy Spall as LS “Laurie” Lowry: rent collector by day and attic painter by night, and still living with his class-obsessed, bed-bound, unappreciative mum (Vanessa Redgrave) in a terraced house in Pendlebury, Lancashire.

Painter and photographer Frank Gray, who hosted the class, painted six “Lowrys”, copies of some of Lowry’s works, for the film (check out my short interview with Frank) and was on hand during the making of Mrs Lowry & Son to help Spall with his preparations. (The actor had already learned to paint in preparation for his role as British watercolourist WM Turner, in Mike Leigh’s 2014 film Mr Turner, which won him the Best Actor award at Cannes.) 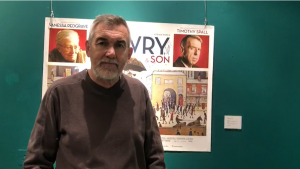 Artist Frank Gray at the event

Telling one friend I was off to a “paint like Lowry” class, they replied “stick figures can’t be too hard!” Ha! And actually – as we discovered when Frank took us on a brief tour through some of Lowry’s paintings and sketches  – his artistic life encompassed many different styles.

Find out more about the process, my beginners’ tips and what I got from the experience, below.

Frank had printed off several different Lowry prints, from landscapes to portraits to sketches. We got to choose which one to copy, and while my black, white and grey print of two men fishing off the end of a pier lacked colour, it did offer some scope to stretch myself with an outside chance of my final effort resembling the original.

All the prints had already been marked out lightly with a grid of squares, to help us with proportion and placement, and hopefully avoid it ending up looking like a Cubist portrait with its nose where its ear should be. 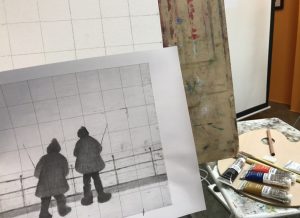 The Lowry print, squared up, and my canvas with my pencil grid

Frank suggested that if a picture was too large or complex, to choose just part of it – mine had lots of white space so I folded over the sides of the print to leave the central area. Then I marked out my own small canvas with the same number of squares as on the section of the Lowry I was going to be copying.

I sketched it out, as far as possible with the elements on the canvas corresponding to the same squares as on the print. 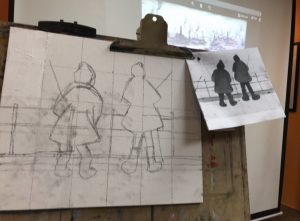 He also painted his canvases in flake white before starting. 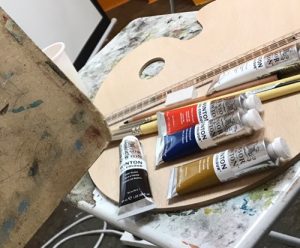 A Lowry artist’s tools (plus some wine)

We had about 90 minutes of painting, once I’d had some confidence-boosting wine and eaten most of the crisps, and we’d all sat down, listened to Frank and chosen our pictures. And you know what, I loved it – I even managed to dredge up mixing and shading memories from the O’level years.

No I didn’t finish, though like an episode of Bake Off I kept going to the last second. 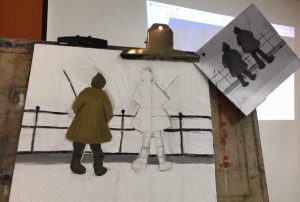 We were allowed to take home not just our canvases but also aprons, wooden mixing palette, pencil, paints and brushes – and yes I am committing now to finishing it (and to everyone thinking “but she’s been promising us a movie podcast since January 2017”, I’m sorry but Finishing my Lowry is now ahead of Start my Podcast on my to-do list). 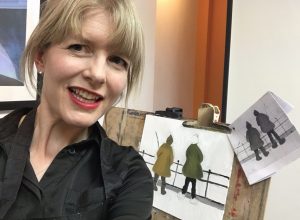 Me and my unfinished 90-minute masterpiece

My tips for painting novices

(That’s people who haven’t painted before, not trainee nun portraiture, though if you’re into that I say go for it.)

1. I was sitting right at the front – not my choice (I was eating crisps when everyone sat down) but honestly, it turned out to be for the best as I couldn’t see, or compare, everyone else’s pictures. Because they will look better than yours, to you. (They may even be better than yours – the paintings by my fellow Lowry-ists were really impressive, so I’m going to cheer myself up by assuming they were already talented artists, like ex-Broadway hoofers who turn up as contestants on Strictly Come Dancing.)

2. Play to your strengths! Choose something achievable while you get to grips with colours, shadows, using the paints etc.

3. The “grid system” is a huge help. I have the attention span of a gnat and hate preparation, but I’m glad I did. Measure and mark your canvas out with a pencil grid, and do the same on your print, so if you’re not good at freestyle copying you can work out what features should be in which square. You can rub our any mistakes! (Or you can if unlike me you take the clear plastic off the eraser.)

4. Clip your print to the top of your easel so you don’t have to keep looking down.

5. WEAR AN APRON! I had no idea paint could get into so many places. I finished up looking like a Jackson Pollock.

6. When mixing colours add a small amount of the darker colour to the lighter one. It’s easy to darken a shade you’ve mixed too light than the other way around.

7. We used oil paints, and just wiped our brushes between colours rather than trying to clean them, which could have affected the next colour we used them with.

8. Oils do take a while to dry. If you’re painting away from home (at a class, at a friend’s or outside) you can lay a piece of wet paper towel over your canvas and it should stay unsmudged until you get back. Mine survived 40 miles unscathed, despite a windy walk from the venue, two tubes, two trains and a walk home via the kebab shop.

9. Social media is your friend! I love my painting like a mother loves her messy, imperfect child, though like my kids, it looks considerably better photographed than in real life. So stick your masterpiece / mistresspiece on Instagram, Twitter, Facebook… and if anyone’s rude about it, order a hitman, I mean block them.

10. Above all, have fun. I know, I know – everyone says that. I’ve tried enough hobbies involving spatial awareness over the years that ended in humiliation (I once went clay pigeon shooting for a work teambuilding day and even the instructor expressed amazement at how bad I was) so I’m well aware what it’s like dipping your toe into something new that doesn’t play to your strength(s). But the great thing about painting is that you can do it alone or with friends, and nothing you create will be a complete disaster, as you can simply invent a new term for your style that sounds really impressive. Postmodern impressionist naive realism anyone?

1. It honestly gave me a big confidence boost to try something new outside of my (admittedly extremely tiny) comfort zone.

2. Doing something for me without hearing “Muuuummmm!” in the background for two hours was blissful. It required total concentration while also being incredibly relaxing, though I did end up covered in paint. It’s basically a messy version of mindfulness.

3. I’ve got a new hobby to share with my youngest, that doesn’t involve discussing the finer details of 15 episodes of Jessie. My 7 year old saw my painting, and decided to have a go himself. I sketched it out for him and helped him with some of the painting outlines and techniques, but in the main this is his own work. (Next up: characters from Roblox for him, and maybe a nice fruit bowl still-life for me.) 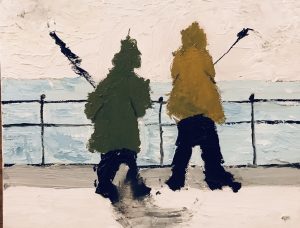 Thank you DDA Group for the invitation and supplies, and Frank Gray for his expertise, patience and informative discussion.

Read my review of Mrs Lowry & Son, and my interview with Frank Gray. I