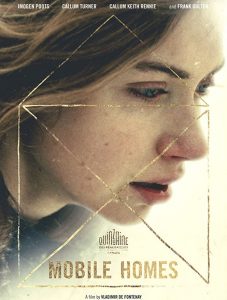 It’s part of the mythology of America that everyone can move on, starting afresh somewhere new, the slate wiped clean.

Everybody deserves a second, third of fourth chance, even if in practice it often doesn’t work out that way for the very people that need it most.

Mobile Homes, based on director Vladimir De Fontenay’s short film of the same name from 2013, certainly shines a light on the American Dream; its twisting, snakes-and-ladders reality for someone who has fallen through the cracks but still clings to the idea of new beginnings.

There’s a clarity to the film’s narrative and its allegories, presumably arising from De Fontenay’s position as an outsider (he is French) taking on such typically American themes. Sometimes you need some distance, whether time or geography, to ring-fence a story without being waylaid by “theme creep”. (Interestingly, both his adult leads – Imogen Poots and Callum Turner – are British.)

For young mum Ali (Poots) and her 8 year old son Bone (Frank Oulton) the paradox is that the home they seek is much closer to, well, home.

She is living on her wits, and expects Bone to do the same. Coming out of a meeting to discuss putting her son in foster care, she grabs the free fruit on offer and is unconcerned when she hears Bone has already left, commenting that he knows how to get home.

Her boyfriend Evan (Turner) is as on the edge as she is: drunk, aggressive, whiny, selling drugs, organising cockfights, screaming, bullying.

Theirs is a dangerously co-dependent relationship between needy people who desperately need support. Their attempts to pull themselves up are based more on fantasy than reality, so day-to-day living relies on cunning and hustling, often exploiting Bone: training him in the way of the Diner Dash to escape paying for meals, sending him into houses to see if they’re empty so the three of them can spend the night.

Bone is a sweetheart though he’s seen more than he’s heard. Ali doesn’t see him as a burden but she doesn’t really interact with him. He’s something of a blank sheet for them to project their versions of parenting onto, and a useful tool for Evan’s scams.

And Ali and Evan do try to parent; though it’s an erratic and haphazard approach, picking on the boy’s small misdemeanours while ignoring his need for stability.

It’s at a cockfight that Ali finally has an epiphany about Evan’s treatment of them. A police raid leaves the 8 year old stuck inside, and though she gets him out safely, what could have happened leaves her stunned. It’s the one time we see her really crying, as if tears are a luxury.

Sneaking into a mobile home to escape Evan, Ali and Bone snuggle up together on the floor for the night; waking up next morning their uncomplicated delight at finding they’re on the road, as the home is transported to a park miles away, is a breath of fresh air for them and us.

The trailer park they end up at is run by the kind but flawed Robert (Callum Keith Rennie, avoiding the twinkly-eyed rough diamond cliche). It’s a chance for Ali and Bone to be their real selves as she’s put to work painting and decorating, and he can play with other children.

I liked that Ali’s self-improvement is believably stop-start. She still hardly ever knows where Bone is, even at night, though this time the residents of the park provide a safety net.

And she still makes mistakes, that kind of self-sabotage designed to put you back where you started. Her last big showdown is self-destructive almost beyond reason, though it works as a visually arresting answer to the “what is a home? What is a family?” questions, as furniture bobs away across a lake, into the distance.

Imogen Poots is very affecting as the young mum. It’s a role with shades of Lila, her character in last year’s brilliant thriller Sweet Virginia, a young woman out of her depth who makes bad decisions. Callum Turner is also good as her manchild boyfriend, even more whining, wheedling and threatening when he manages to track them down, as now we see him out of the milieu they lived in.

Mobile Homes is initially a tough watch, the depressing grind of their existence interspersed with danger and unpredictability. (Though those of you shocked by Ali demonstrating how to lick the irritating gunk from a cockerel’s eye haven’t moved in the elevated circles I have, where mums are known to suck their babies’ snot out of their noses.)

Cinematographer Benoit Soler doesn’t shy away from the unrelenting chaos of Ali’s life, or the chilly realism of her and Bone’s new home. The beauty we see is in glimpses only, brief interludes to lift the monotonous grifting and hustle: a sex scene in a swimming pool is brightly coloured under the water. Later she stands on pristine snow in her new home, the trees starkly black and the sunset a riot of brilliant colour: pink, red, yellow.

Like the couple’s existence, and attitude to parenting, at times Mobile Homes is scattergun and short-term. But mostly the film feels self-contained, like a snapshot of one little family; despite the reasons for Ali needing to escape, and the ways she does it, being way bigger than simply her story.

It’s not saying much that’s new about women like Ali, or her situation. But at its heart Mobile Homes is an ode to a dream that is never entirely out of reach.

Mobile Homes will be available on demand later this year. Read my interview with Mobile Homes director Vladimir De Fontenay and watch the Mobile Homes trailer: