You are here: Home / Film Reviews / Massacre At Central High 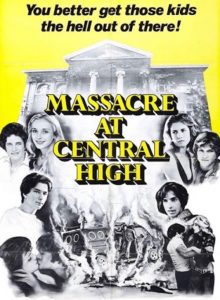 A new student starts at a high school and discovers it’s ruled by a clique of bullies. Luckily he finds a near-kindred spirit in a sweet female classmate. Soon a series of horrific deaths rock the school, but no one realises they are actually murders. And then new bullies move up to fill the vacancies. Eventually New Boy sets a bomb to explode at the school, and the only woman who can stop him is Sweet Classmate.

No not Heathers – Massacre at Central High, also known as Blackboard Massacre and released 12 years earlier than that coruscatingly sharp 80s satire.

Of course in other ways this is very different. There are no public displays of grief when their tormentors die; instead they’re positively delighted the bullies have been bumped off. In a way it’s class war – like an exploitation Animal Farm as the rich kids are killed but their previously marginalised replacements turn out to be as bad.

I first watched this around 1990 with my sister, and the Heathers similarities struck us straight away. We only rented it from our local video shop as we had gone to a school called Central High, though ours was single-sex and no one died.

It’s designed to appeal to fans of teen horrors. The school kids all look mid-20s and when you see the gratuitous nudity you’ll understand why. Skinny dipping, beach sex, naked camping (students Spoony, Jane and Mary, a 1960s band name if ever I heard one); none are essential to the plot but equally none seem out of place.

Though it doesn’t go as far as many of that genre. The deaths are shockingly funny and arranged so victims realise at the last minute what their fate is to be, but there’s no deranged killer stalking a girls’ dorm.

It’s actually quite a disruptive film, with those horror tropes designed to bring a flawed by intriguing movie to a teen audience. There are no adults around for most of the running time – parents, teachers, school head, police – until new boy David tries to blow up the Alumni Dance. As if society only then shines a light on this strange school.

When David (Derrel Maury) first arrives the only person he knows is Mark (played by Andrew Stevens, the only one of the cast I recognised, and yes it turned out he was in Dallas. I didn’t know any other names and it turns out three died tragically young –  Lani O’Grady, Rainbeaux Smith and Ray Underwood, who played Jane, Mary and Bruce).

Mark has been trying to set David up as a member of their bullying group. David isn’t interested, having had an early run-in with the others – Bruce the ringleader, Paul (Damon Douglas) and Craig (Steve Bond).

Mark is constantly pulled between David and his friends, as he tries to get David to tone down the criticism and the bullies to accept the new kid. Adding to his conflicted loyalties is girlfriend Theresa (Kimberley Beck). Befriending David, she’s remarkably up front about their attraction, happily admitting they went skinny dipping and wanted to have sex but David refused, out of loyalty to Mark. (This is presented by her as evidence of David’s goodness, though there are probably easier ways to show that. Then again this was the 70s.)

The bullies rule the school. “They get to everyone sooner or later” says one girl. “the Little League Gestapo” Theresa calls them. Their activities range from petty nastiness to smashing up the poor kid’s car to attempted rapes. But it’s after they deliberately injure David, leaving him with a limp, that he vows revenge.

First to go is Bruce, after a line is cut on his hanglider. Soaring over the countryside, in scenes that are remarkably restful after the feverish undercurrents of school life, Bruce not only has to face his own death as he plummets from the sky but is then fried alive when he hits electricity wires on the way down.

Next is Craig, a keen diver. A note warning him that the janitor is cleaning the pool that night is removed by David, who then switches off the lights. As Craig is mid-dive from the highest board, David switches on the lights, meaning Craig sees the empty pool beneath him but can do nothing about it.

Watching Paul and Mark realise their power is dissipating has a certain karma to it. The power balance has flipped and the two men see their influence ebbing away like Craig’s blood on the empty swimming pool floor.

And then Paul is locked in a runaway van careering backwards rounds the bends of a hillside road.

But like a country emerging from dictatorship, after that initial first taste of freedom – in this case cafeteria food fights and encouragement of the uncoordinated in gym class – the vacuum left behind must be filled and B-grade bullies seize their chance.

Although initially David kills only the main three bullies, soon he’s gunning not just for their replacements but anyone he believes is not behaving as he thinks they should. He refuses to take up the mantle of leadership yet continues to be judge and jury behind the scenes. Eventually it seems to him that the only way to stop the student hydra sprouting new heads is to destroy it completely.

As the Alumni dance starts, David plants a bomb; and it’s only when he realises the explosion will also kill Theresa, who knows of his plans, that he retrieves it and blows himself up at the bottom of the imposing school steps.

Like Heathers it’s a conclusion that ensures both the bullies and the white-knight-turned-madman are gone, leaving the young woman with her school just how she likes it. Truly the lord moves in mysterious ways, even under patriarchy.

Massacre At Central High is an oddity. The high school in its beautiful old building is a microcosm of society, yet all trappings of outside life are missing. Its examination of how class-related bullying affects young people’s behaviour is interesting.

There are many bad things about it. It looks cheap. The acting veers from dreadful to decent; sometimes poor performances are due to pacing issues within a scene. While the satire in this and Heathers 12 years later are rather bludgeoning, the later film had a central finesse and a blistering humour that this hugely lacks. The comedy here sits uneasily with the brutality.

But with enough tags for its 70s teen market (several naked women, one naked man, sex, murder, deaths both gory and witty) its ideas had a route to an audience.

Buy Massacre at central high on dvd from amazon uk