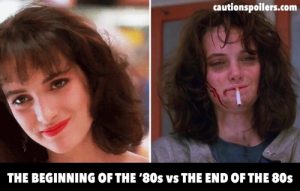 The 80s was a blunt decade, designed to disrupt – oversized, brash and brightly-coloured, where the brave and bullish could succeed. In a time defined by red lipstick, shrinking violets need not apply.

Everything is over-oversized in Heathers. It’s even bigger, brasher, brighter and more vicious than the decade it satirises.

Unsurprisingly in this live-action, cartoonish world, it’s a blunt satire, though still effective, and still coruscatingly funny – even if director Michael Lehmann’s film has turned out to be scarily prescient.

What that decade started, and Heathers mocked so effectively, now – 30 years on – looms even larger than this larger-than-life movie.

And its events and responses have become commonplace: high school killers, social contagion, the public face of grief. (The ease with which people will believe what you tell them to believe, and the cruelties and bullying of teenage years, have always been with us, though social media now offers faster and more crushing methods of delivery.)

Already you see in Heathers the worship of the wealthy, moving from the idea that the 80s offered prizes based on hard graft to linking inherited wealth with virtue.

It’s also eminently quotable, stuffed with lines that have seeped into movie-lovers’ DNA like cultural epigenetics. I’ve lost count how many teenage boys in duster coats hailed me with “Greetings and salutations” in the years after. A lot of kids today have probably only heard of Mother Theresa in relation to being fucked gently with a chainsaw.

The dialogue is stylised and caustic, though Veronica’s diary entries would be anyway; those pithy comebacks and blistering speeches no one ever remembers when actually faced with their nemesis. Her angsty voiceovers sound like the almost-rhyming couplets of an 80s-era teenage Shakespeare.

Veronica only wants her school to be nice again. Like many an accessory to murder it’s only when someone with both the willingness and the ability turns up that it goes from fun, avenging daydream to actual death.

JD (Christian Slater) is the new boy. He’s handsome and lonely and used to moving schools and towns with his scary-eyed, businessman dad.

Veronica is desperately looking for a way out of the Heathers clique – hating them, herself, the constant affirmation of the hierarchy and the humiliations they endure. “Veronica needs something to write on. Heather bend over” says Heather 1 to Heather 3 when she needs Veronica to write a fake love note.

Like JD she’s an outsider. She’s often shot slightly away from them, and her clothes have an edge – often black, or grey, she is similar yet different as befits the cuckoo in the nest.

First to go is Heather 1, the school Queen Bee. Heather is horrible, and loves humiliating her acolytes. It’s Veronica’s inability to keep her drink down at the world’s most boring university party (one where Heather’s youth and inexperience actually looms as large as Veronica’s) that results in Heather’s demise, after she threatens to tell everyone at school on Monday.

Soon thanks to JD and Veronica, Heather is lying on the floor, after mistakenly drinking drain cleaner. Veronica’s practice at writing fake love letters for her tormentor means there’s a certain karma now she’s scribbling her suicide note.

Veronica, of course, only wanted to make Heather thrown up after a glass of milk and orange juice. In fact she continues to affect wide-eyed surprise as frenemies are bumped off. There’s no comeback for her, except a really bad hair day at the very end, when she emerges from the school building to watch JD blow himself up.

The irony is that for Heather, death becomes her (in real life too everyone is nicer, more beautiful and more popular when they’re dead, unless they’re Pol Pot). The same is true of the soon-to-be late lamented sports jocks Kurt and Ram. For what these one-dimensional, privileged, bullying teens lack in life, they achieve in death. It’s a post-mortem Wizard Of Oz as they gain a soul, a brain, emotional depth. And it really annoys Veronica, which is a shame as it’s a win-win.

But kill the queen bee and you create a vacancy; soon Heather 3, freed from her low status, is leapfrogging the actually rather nice Heather 2 and sporting the huge red scrunchie, signifier of Top Heather.

There’s a smug joy in examining classic movies for “problematic” content. We enjoy a self-righteous wallow while tutting at jokes that were sometimes actually satirising what we roast them for.

I do of course give myself a free pass, mainly as one of my hobbies is checking out how much everyone smokes, a hundred years hence, aboard the Nostromo in Alien. (Though to be fair after having two terrifying small creatures burst forth from my body, I’m surprised I didn’t end up on 20-a-day as well.)

But despite Heathers’ age – predating even the 90s trend for the privileged to mock disadvantaged groups from under a redeeming cloak of irony – there’s little to trouble the Thought Police. And it only loses some of its freshness because it has been so endlessly copied.

I say little – school jocks Kurt and Ram’s murders being framed to look as though they were tormented gay lovers is wince-inducing. It may be highlighting the hypocrisy of a society that turns homophobic stars into dead gay heroes, but using stereotypes as a device to mock them (rather than the mocking itself) comes across as unpleasant. (I can’t remember what I thought at the time. I imagine I thought it was hilarious.)

The staffroom meetings, as the school has to decide how to respond to the deaths, are a hoot as teachers indulge school counsellor Pauline, desperate for her pupils to share their emotions. Soon it’s a feedback loop between pupils and the TV cameras instead of a spontaneous show of grief, or even teacher-led discussions about feelings.

JD is terrifying, a lonely madman who considers himself far cleverer than he’s given credit for. Slater’s portrayal is a remarkably accurate picture of the kind of teenage white male with a gun or explosives that we’ve seen, chillingly, so often in real life.

He justifies his actions as necessary for society: “Kurt and Ram had nothing to offer the school but date rapes and AIDS jokes”.

Ryder shines, her Veronica embodying that teenage maelstrom of clear-headedness and confusion, independence and conformity – the muddled crossroads when teens begin to realise the sheen of adulthood hides a hypocrisy in some ways worse than the clearly-defined brutality of high school.

Veronica’s realisation that she’s swapped one tyrant (Heather) for another (JD) drives her to a quick-thinking fightback, beyond most of us at 16.

The climax is expected; there’s nowhere else for JD to go, as he turns on Veronica then tries to blow up the school.

Anyway enough of society, let’s get to the important question. Can we, 30 years on, still make “Very” happen?

Heathers has been re-released in 4k for the 30th anniversary

Check out my review of intriguing 1976 low budget teen horror Massacre At Central High, which could well have been an inspiration for Heathers.