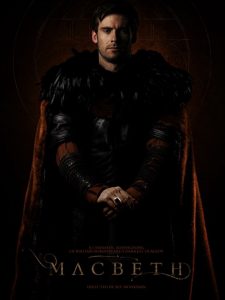 I know, I know, I’m always #TeamLadyMacbeth. Come on, she’s not all bad! But in this new telling of this familiar Shakepearean tale of regicide and madness among Scots nobles, Akiya Henry’s performance as the scheming wife of our favourite usurper to the throne is a genuine stand-out.

By turns clever, driven, sexy, forceful, clear-sighted, elegant and finally broken, Henry’s is the kind of performance that simply holds the eye whenever she’s on screen. She’s the power behind the throne before she and her husband are anywhere near it.

And the story, for people who either haven’t seen or read it, or who had it as a school exam text 20 years ago which put them off the Bard for life?

A battle between two Scottish factions has resulted in victory for King Duncan. Macbeth (Mark Rowley) and Banquo (Al Weaver), good friends and both fighting for the monarch, survive the slaughter and witness a prophecy – that Macbeth will become king and Thane of Cawdor, while Banquo’s offspring will be kings.

Returning to Court, Macbeth – already Thane Of Glamis – is indeed made Thane Of Cawdor, the original Thane still being alive but about to be executed for treason.

Macbeth’s wife encourages him to kill King Duncan (“look like an innocent flower but be the serpent under it” she wheedles), but one death is rarely enough when thrones are involved, and soon the toll is rising, both friend and foe.

His crisis of confidence as King Duncan sits at his table (Duncan is “here in double trust” says Macbeth, the younger man kinsman and subject, as well as host), leaves Lady Macbeth angrily frustrated as she pushes her husband forward with their plan despite his doubts. The deed carried out, later he almost admits what he has done as courtiers stop and stare at his wild ramblings.

Once Macbeth is king, he and his queen clothe themselves in long cloaks and huge black feather ruffs; the other courtiers sit with their own partners, also dressed the same. Is this where loyalties always lie?

But as I probably also said in my review of 2015’s Justin Kurzel-directed version, usurpers to thrones can never rest easy; and safety, like surgery where so much healthy tissue must be cut away round the edges just to be sure, often requires killing more and more people.

This is a visually stunning play (it was apparently shot entirely in front of a green screen), with lots of style though not quite enough substance. Most of the action takes place in a huge building like a dolls house, the front missing from its many rooms on many floors. There are no lingering shots of freezing heather or rocky Scottish beaches like in the 2015 version. Every scene takes place under some sort of cover, which highlights the hidden scuttling nature of the murders taking place.

All is black and grey and red. It looks modern and stylised but it also reminded me of those gloomy, fantastical paintings in big gold frames that fill minor British art galleries.

There’s a spiral staircase too; down it run two killers, round and round, down and down, presumably to hell for their crime. Later Lady Macbeth herself lies broken at the bottom, the enormity of what she and her husband have done too much even for her.

The dolls house approach works on many (*terrible pun warning*) levels. It makes us mere observers but in the manner of that matchmaker theory of God, where we create these figures then take a hands-off approach as events move to their inevitably bloody conclusion.

And it demonstrates how life goes on for ordinary people who have to live through political and social upheaval. Navigating their way round new monarchs and new rules over which they have little power, trying to stay alive, it’s no wonder that they snatch what chance they can to eat, drink, and be merry.

For while elsewhere in richly draped darkened rooms the privileged Lords and Ladies get to enjoy the indulgences of their self-doubt and introspection, returning soldiers are having a bawdy time with young women in a dining room, filled with natural light, feather boas waving as couples have sex on benches.

The staginess is reflected in the numbers of people in early scenes, with tiny groups killing, or burying the dead (it reminds me of 300 actually, with its stylised comic book visuals, and an Oracle, though in that story there really were only a few soldiers setting out). But at the end a large army advances under bubbling dark grey skies.

The music is jarring, and as Macbeth’s decisions move the story forward to more death, the piano keys and plucked strings are decidedly off-key, like a freakily bad Greensleeves.

It doesn’t always work. Mark Rowley’s performance occasionally strays into whining, and the calibre of performances varies. Though despite the dips, I liked his Macbeth; young, fit, and bearded. Later the beard goes. Almost a joke about hipsters having to grow up? Facial hair used to be an indicator of age and the wisdom that can’t help but come with it. Now it is youth.  He seems quite accepting by the end, of his culpability in what will happen to him, though it’s not clear if he knows what his end will be. And his marriage is entirely believable; equals in bed, she is his superior in planning and clear thinking.

Banquo is funny, especially in their first meeting with the witches. He’s a dab hand with a feather boa too. King Duncan (David Bark-Jones) is self-satisfied and smug, and I can’t say I was that upset at his demise. His son Malcolm (Charlie Hamblett) looks indolent, unformed by real battle, yet receives honours (he is made Prince of Cumberland) from his father for doing little.

Charles Mnene is excellent as McDuff in an emotional yet steely scene where he’s told of his family’s murders: “dispute it as a man” urges the young and inexperienced Malcolm. “I will do so but I must also feel it as a man” replies the bereaved husband and father, tears running down his cheeks, readying himself for grief and then vengeance.

This is Meta Macbeth in some ways (how soon before some linguist discovers Shakepeare invented the concept of Meta? Nothing would surprise me after finding out he invented the hobnob) with a porter (David Bradley) watching a previous, older silent film version of the same play. (Don’t ask me which one, I have no idea. But if you know, please tell me! It might be important).