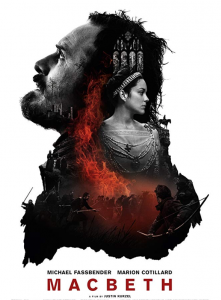 Lady Macbeth schemes to propel her husband towards the Scottish throne but even as the chain of events she set in motion moves bloodily forward it’s hard not to feel sympathy for her; especially as she speaks to and weeps over a hallucination of her dead toddler with the heartbreaking “wash your hands, put on your nightgown, look not so pale. To bed! To bed!”

I’d never seen Macbeth performed before, either on stage or screen. Which is amazing considering when I was growing up the RSC came to our city every year for an extended stay plus my mum pretty much communicated with me via quotes from the Bard. It was only as I partially worked my way through his oeuvre that I started to realise how many of the things she said to me she hadn’t actually made up at all.

Somehow Macbeth slipped through the net (I liked Shakespeare’s comedies and to be fair you’re never going to get a cheerful Hey Nonny Nonny or a Globe-perfect fart joke to work on a windswept Scottish hillside).  Though “stand not upon the order of your going but go at once” was something mum said to me all the time (I haven’t killed anyone but I am a terrible procrastinator).

This retelling starts on a gloomy mountainside with a heartbreaking funeral for Macbeth and Lady Macbeth’s small child. Despite Lady Macbeth’s apparent stoicism her devastation is clear to see as her toddler is cremated (yellow, orange and red from fire and blood and the occasional blazing sun are really the only bright colours we see in this adaptation. Everything else is muted greys, greens, creams and browns from the windswept mountainsides to the icy beaches).

For those who find badly done Shakespeare interminable (me!), this (a) is a very good adaptation and (b) comes in at a snappy 1 hour 50 minutes.

Scottish nobleman Macbeth (Michael Fassbender), wins a brutal battle against King Duncan’s usurper Macdonwald but then hears a prophecy from three witches: that Macbeth will one day be king, and that his friend Banquo (Paddy Considine) will be the father of kings.

It is, quite literally, a self-fulfilling prophecy. It’s clear how taken he is with the idea and can’t imagine why anyone wouldn’t be, even saying to Banquo “Do you not hope your children shall be kings, when those that gave the Thane of Cawdor to me promised no less to them?”

Encouraged by the scheming Lady Macbeth (Marion Cottilard) he forces the first part of the prophecy – that he becomes king – only then realising his actions will lead to the second part of the prophesy coming true too.

Macbeth, at the instigation of his ambitious wife, kills King Duncan (David Thewlis) with a dagger. But as in all the best tragedies one crime leads to another until soon the trail of blood and ash leads unmistakably to him.

Regicide, however necessary it is deemed, is always going to be a guilt-ridden exercise and Macbeth is so introspective he’s almost inside out. Though we don’t know if he has always been like this, or if battle and bloodshed have pushed him towards madness and a sense that actions carried out by his hand are somehow also out of his hands.

On his way to carry out the murder, Macbeth is gloomy, aware of evil around: “Now o’er the one half-world. Nature seems dead, and wicked dreams abuse. The curtained sleep. Witchcraft celebrates and withered murder moves like a ghost.”

Caught in a maze of death it’s no surprise that once Duncan is dead and Macbeth is king he slips further into moroseness and melancholy, knowing what other horrors he must commit to maintain his new position. “Why do you keep alone?” his wife asks, and he answers “we have scorched the snake not killed it”.

Just as a man who marries his mistress creates a vacancy, so the killer of a king who is himself crowned will always be looking behind him. And Lady Macbeth’s suggestion of handwashing to literally and figuratively cleanse themselves (“a little water clears us of this deed! How easy it is then”) seems to be an attempt to convince not just her husband but also herself.

The scenery in Macbeth is stunning, whether heath, hillside, or stony white-waved beach. The costumes are from the same colour palette as the scenery. Boy soldiers stand in dark quilted jackets, faces marked with black for camouflage and scares.

This is a bloody, brutal and dank film, where even daylight when it comes is usually bleak and pale, with freezing beaches and rain drenched moors and a background song of hauntingly disruptive violins.

Battle is jerky slow motion one minute, fast-paced and noisy the next. The action looks desperate and random and unchoreographed, as axes and swords slice through necks and limbs.

The deaths, whether in battle or not, are frequent and often horrific so it’s no surprise that revenge from all sides is swift and not so sweet.

There are several wonderful performances from a cast list Who’s Who of great British acting talent. But in fact some of the best speeches in this adaptation come from more minor characters: Sean Harris as Macduff, James Harkness as Angus, and Jack Reynor as Malcolm all speak with robust Scottish accents and a matter of factness which is sometimes flat but always seems genuine.

Michael Fassbender is very good as the damaged warrior noble who wants too much, with what he thinks is his great sin driving him inexorably towards greater and greater sins. (If it really is inexorable; maybe that’s just a way for Macbeth to wash and wring his hands again without accepting that he could have stopped the madness.)

But Marion Cotillard just edges him in this. Her Lady Macbeth is both much tougher and much softer than Fassbender’s Macbeth with a skeleton of iron enclosing a broken heart.

Buy / rent Macbeth on Amazon.com for VOD, Blu-ray and DVD