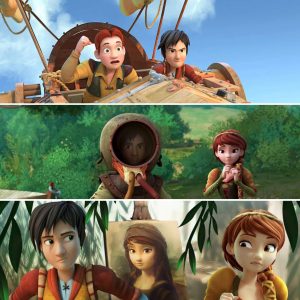 Da Vinci died 500 years ago this year, and I can imagine plenty of children googling him after this, to check out the original Renaissance Man’s full invention inventory.

I had no idea he’d invented a diving suit (tested in the past few years and apparently working) – a design that features heavily in this film and allows us to explore gloomy underwater vistas beyond the bright Italian countryside above ground.

There is certainly, pardon the pun, plenty of artistic licence. The young Leonardo (Johnny Yong Bosch) is only a teenager yet has already invented that flying car, and – famously! – painted his friend Lisa.

But basing what is a typical adventure story (and often an old-fashioned one at that) on outlandish near-truth is a clever idea, and one that’s sure to grab its young audience.

It’s easy to decry animated movies from smaller studios, now we’re so used to fare that is witty, big budget, and zeitgeist-aware. Where are the jokes for the parents? The irony? The slight cynicism? These films, aimed directly at children, particularly younger ones, can get lost; and I’m getting to the point where a children’s film aimed squarely at them is something to be relished.

Leo Da Vinci may not be a blockbuster (the only name I recognised in it was Leonardo Da Vinci – sorry, cast), and it’s not groundbreaking in any way. It is a charming, cheerful tale though, fully aimed at the ten-and-under market.

And while it mostly follows a template, it has that ace up its sleeve in the form of the real Da Vinci’s many inventions. They’re dotted throughout the film, from a flying car to a rudimentary catapult to a parachute, as young Leo battles pirates for long-lost loot to save his friend.

These escapades are the very definition of my favourite family film classification descriptor, “mild peril”.  Leo and his friend Lorenzo (Bryce Papenbrook) are friends with local farmer’s daughter Lisa (Cherami Leigh), though Leo’s liking for her goes rather deeper than mere friendship. But when her father’s crops are destroyed in a fire, Leo and Lorenzo promise to go to Florence to find work to repay her father’s debts. Without the money Lisa will have to marry the local Marquis, whose bowl haircut is enough to put anybody off, medieval fashion or not.

Leo wants to become apprenticed to an artist, though in the town square he’s waylaid by a mysterious storyteller, who has a treasure map for sale. What better use for his new diving suit than to find long-lost riches on a sunken galleon?

He’s joined by Lisa; Niccoló, a young astronomer (“you should practice drawing more” he tells Leo, when presented with a cartoon version of the artist’s famous Vitruvian Man, a gag which I liked but may be too much for purists); and Agnes, a fierce, independent little girl with no family who seems to simply want some adventure.

The chief pirate is, entirely expectedly, the only frightening one, though I’m not sure where he’s meant to be from; generic pirateland presumably. But if his accent meanders, the story doesn’t, bouncing merrily in at a brisk 85 minutes.

There are some cute visual gags; I liked the threatening shark Leo encounters on one of his undersea walks, made safe when the inventor shoves the air tube from his diving suit into its toothy mouth so it expands like a balloon, before deflating loudly as it careers backwards into the far distance.

The jokes are amusing rather than rip-roaringly funny, but there’s a sense of good-natured geniality throughout the film. The animation is basic but undeniably pretty, capturing that sometimes arid but still mostly green and floral countryside I remember from Italian holidays in the past (the 1980s, despite my son’s suggestion that I might have been a contemporary of Leonardo himself).

Characterisation can be stereotyped, particularly Lisa, who is also underwritten compared to the others: Agnes, Niccoló and Leo have strong identities.

This is a simple adventure tale for younger children, with a bright and breezy approach to its history-based ideas. There’s an argument that the film is using Da Vinci’s incredible achievements in art and engineering as a shortcut to an interesting story, though overall I feel bringing his inventions to a new, young audience can only be welcome (though if you’re not a renaissance expert I’d suggest doing some family research into his achievements before you watch the film – it’s a much more interesting watch that way).

Despite the sometimes old-fashioned storytelling, Leo and his friends’ success in their quest is based on scientific enquiry, teamwork and technology – less deus ex machina, more actual machines.