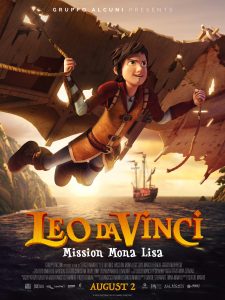 Ok; I admit I was going to give this film two stars and as you can see I gave it four stars by the end. (oh and if you haven’t looked at the rating then DO IT NOW!!!) 🙂

Lisa’s crops burn down on the farm and her friend Leo Da Vinci (Johnny Yong Bosch) and his friend Lorenzo are trying to get enough money for her and her dad to keep the land. They find a treasure map and go looking for the treasure but pirates want to find it too.

Leo is actually Leonardo Da Vinci who was a famous man who lived in Italy 500 years ago. He painted the Mona Lisa (that’s Lisa in the film played by Cherami Leigh) and also invented lots of things.

Something else that is real, now the very talented man/boy (that’s me Ashton not Leo) spotted that in the film Da Vinci was LEFT HANDED so we looked it up and he was. 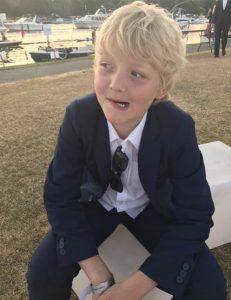 It’s funny and exciting. They were in an abandoned ship underwater and there were skeletons – I don’t think it was a scary movie but TRUST me you can scare me with skeletons easily which kind of ruined the point of my comedy review.

I also like how the music was operatic then when people get a bit bored by that it adds a little hint of, well let’s just call it “wow factor”. And FINALLY springy music at the end! “Yay” and if you are like me you know that music plays a humungous part in film because bad music bad mood, bad mood bad review.

And now I realise my comedy review needs more comedy which brings me on to my next bit which is that one of the pirates was always saying “in all my years of pirating I have never seen…” and then it happens to him!

I don’t think the cannon balls were very realistic though because one time they were all landing near Leo with no splash then they fire them later, huge splash. 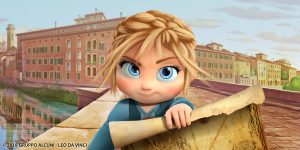 Agnes aka the moody 5 year old

There was also a little girl (Agnes, played by Faith Graham) who all the way through was acting like one of those moody 5 year olds that think they are 16, then out of the blue at the end she hugs somebody who I am going to be speaking about in a second…

…now there was this kid Niccoló (Landen Beattie) who knew all about the stars, and he was like the nerd of the film I guess? But he knew all about eclipses which turned out to be important. Eventually!

To sum up, this movie always surprises you. I think it was a good movie. The storyline got better after the start and by the end it had earned a 4-star rating from me.