You are here: Home / Film Reviews / Killing Of A Sacred Deer 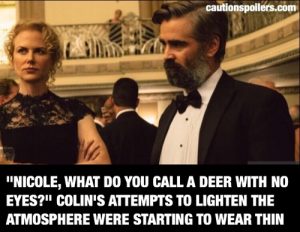 The background sounds during key scenes in Killing Of A Sacred Deer – most of the time it isn’t really music – hugely reminded me of The Twilight Zone, and in many ways the film is like an extended, European cinema version of one of its episodes.

This is certainly a movie that is hard on the ears. There’s both a clinical precision and a clinical detachment to the tonelessly delivered dialogue, which is appropriate as the central couple – Steven (Colin Farrell) and Anna (Nicole Kidman) – are both doctors, he a heart surgeon and she an ophthalmologist.

Their speech tones and patterns closely resemble those used in The Lobster, Yorgos Lanthimos’s last movie, which also starred Farrell and also had a medical bent. Steven and Anna make the most emotional statements without any emotion, though often even the topics they talk about are unnerving.

Their daughter Kim is 14 and her father happily tells a fellow guest at a medical dinner, in that flat tone, that “our daughter started menstruating last week”. And Kim (Raffey Cassidy) and her younger brother Bob (Sunny Suljic) talk between themselves in the same way, often using adult or formal terminology; discussing Mp3 players rather than iPhones and iPods, for example.

That’s not to say the film is devoid of emotion. What father could remain unemotional when having to choose which of his children to kill to save the rest of his family? Steven rages, and even cries, but that linguistic delivery is maintained. In fact the only character who breaks out for any length of time is Anna, who, as her family descends into horror, begins to (mostly) converse in a more naturalistic way. (Which makes her later outbursts of anger directed at her daughter harder to take.)

Although in some ways Anna is equally as controlling as her husband (and for a medical family, they have a distinctly “do as I say, not as I do” attitude to smoking) there’s something creepily Stepford Wives about the whole set up, which doesn’t just cover their small family unit. Steven’s colleagues speak in the same way, with one even demanding sexual favours from Anna in return for help. She is very submissive during sex, saying “general anaesthetic?” then lying on the bed completely still while her husband masturbates. (Though she did rather look as if she was composing a shopping list in her head the whole time. Don’t lie, we’ve all done it.)

The source of the horror and emotional chaos about to engulf this mannered family is a 16 year old fatherless boy called Martin (Barry Keoghan). Steven has befriended – or been befriended by – Martin, whose dad died on the cardiologist’s operating table several years before.

It’s just the kind of relationship that a responsible adult would have nipped in the bud at the start, but instead the older man has continued meeting Martin in diners and even buys him an expensive watch. Then he invites the boy home to meet his family.

It can’t be guilt that makes Steven act like this as he doesn’t hold himself responsible for the death, and anyway it turns out only anaesthesiologists can kill someone during an operation (his anaesthesiologist colleague says the opposite). But Martin does hold him responsible.

Bob is the first to fall ill. Suddenly unable to use his legs, all hospital tests come up negative. Martin, whose demands on Steven’s time have become more intense and more threatening, tells the doctor that this is only stage 1. The next stages are a refusal to eat, then bleeding from the eyes, then death. It’s going to happen to Kim too, and Anna. And the only way to stop the process is for Steven to kill one of his family.

Soon Kim too is suffering, though calmly accepting; as if she is channelling the thoughts of Martin, who she has been secretly seeing.  Eventually the children return home, and a light and airy downstairs room is turned into a makeshift hospital room as they’re fed through drips.

The film is an allegory (and Martin even says as much: “do you understand? it’s metaphorical… it’s symbolic”), about what happens when a rule-bound family can no longer be controlled by one person, and that clinical perfection is torn apart.

But other than that it turns convention on its head. For in some ways Martin, who comes across as odd from his very first scene, is actually the most normal of all. Yes he’s weird, but so many teenagers go through a strange phase it’s more worrying if they actually act like Kim and Bob, with their adult conversations and Mp3 players.

The performances are excellent particularly Keoghan, who I hope won’t get typecast playing teenage oddballs, precisely because he’s so extraordinary playing one here. Martin exists within a smoky haze of menace he seems unaware of, something separate from his very matter-of-fact explanations to Steven about what will happen. And even before he is beaten up, his face has the look of a physically bullied boy who has now turned bully himself.

Alicia Silverstone has what amounts to little more than a cameo as Martin’s mum, but her cringe-inducing turn as a woman who has no boundaries when it comes to other people is both terrifying and funny (I challenge you to meet a male doctor in the future and not stare at his beautiful, soft hands).

It is a blackly comic tale, though unsurprisingly short on actual jokes. Any laughter in the cinema (some of which came from me) was definitely of that laughing-through-one’s-knuckles variety, particularly when Steven, aware he has to decide who to kill, interrogates the children’s school principal over which one is brightest and even which the teacher prefers.

Despite the modern setting it has an Old Testament biblical feel. Martin’s revenge is very much an eye for an eye, before they can all start with a “clean slate”. The bleeding eyes reminded me of those statues of saints in ancient churches that weep rusty red tears to encourage donations from gullible parishioners. And what is a heart surgeon if not the nearest thing we have to a deity?

But overall I found it too deliberately unengaging. I’m always reminding my oldest son, who is 8 going on 15, that tone is key when he speaks; meaning and responses change hugely according to how you say something.

So despite the impressive performances, ultimately this story, whether you treat it as allegory or a straightforward psychological horror about a teenage misfit and his thirst for revenge, left me feeling too uninvolved to care about the family or their fate.