You are here: Home / Film Reviews / The Lobster 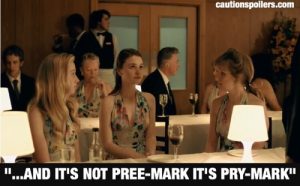 The Lobster raises so many questions. How does society manage relationships, and even if we think we’ve escaped those expectations can we really be free? What’s the best way to get bloodstains out of clothes after a nosebleed? And what would Colin Farrell look like if he wore massive white Y-fronts and worked in an office?

Yorgos Lanthimos’ film answers the last two of these questions easily, and has a damn good stab at the first, in this satirical look at a society (or should that be Society?) which has taken relationship expectations to a new level of micro management – singletons are sent to a hotel where they have 45 days to find a partner or they are turned into animals.

A system even more cruel than it first seems, given that even successful new couples are terrifyingly informed: “if you encounter any problems, any tensions, any arguing, that you cannot resolve yourselves, you will be assigned… children.”

Hotel Manager Olivia Coleman is rigorously rule-bound. “A wolf and a penguin could never live together, neither could a camel and a hippopotamus. That would be absurd, think about it”, she says to newly-divorced David (Farrell) as she explains that if he is turned into an animal he should choose wisely – as though it is another chance to find love, animals must select a mate from within their own species. (Colman’s big-haired manager is fabulous, especially when she and her partner perform a song at the evening “do” like a church hall Rene and Renata.)

This is a satire on relationships and society’s unspoken pressures (interestingly the only three people given real names in the film are men) but it’s also about totalitarianism from Right and Left. Both leaders – in the hotel and, later, among the escapees in the forest – ground their beliefs in their knowledge of what is surely best for other people.

David is a short-sighted middle-aged man whose wife has left him. He’s sent to stay in the hotel (in room 101 no less) with nothing more than those white Y-fronts and his pet dog, who used to be his brother.

Once there he befriends two men: John (Ben Whishaw) and Robert (John C Reilly), also known as Limping Man and Lisping Man respectively. Also looking for a life partner are Biscuit Woman (Ashley Jensen), and Heartless Woman (Angeliki Papoulia), who is emotionally brutal and holds the record for capturing Loners, people who have escaped to live in the nearby forest (each capture adds a day to her time in the hotel).

The greatest irony is that it is only Heartless Woman who seems to have found a way to live without a partner, and she does that in plain sight – her repeated captures of the loners on the nighttime hunts mean her hotel stay is extended again and again, and she spends a lot of time relaxing in the hotel hot tub.

The hotel itself is a wonderful mix of down-at-heel European spa, The Overlook Hotel from The Shining and one of those British establishments that still exist in 2017 seemingly without wifi or customer service.

All is conformity, with no wriggle room for difference. Homosexual and heterosexual relationships are acceptable but bisexuality has been removed as an option (suggesting a recent lurch deeper into totalitarianism). Men are given identical jackets and trousers to wear and women identical floral dresses. Names are almost redundant in the movie and the credits, with defining characteristics being, well, what defines you.

Everyone is desperate to find a mate but most assume they are themselves the better offer, and refuse to settle for someone who isn’t deemed perfect for them despite the risk involved.

It’s funny at first, but also increasingly, desperately sad, as the days tick by. At least the scenes in slow-motion give the protagonists a few extra seconds of humanity. And the utter earnestness of nearly everyone just adds to the heartbreak. They could all simply pair up with anyone else in the huge hotel dining room if they all accepted their real defining characteristic was a sense of humour bypass.

Eventually David escapes to the forest, where the loners live in freedom apart from the fact that they wear identical navy raincoats and Loner Leader Léa Seydoux doesn’t allow anyone to flirt or fall in love on pain of extreme, well, pain.

It’s here that David meets Short Sighted Woman (Rachel Weisz), and the two of them begin to defy the love ban with their own sign language. Soon not only can they secretly declare their adoration for each other, with all that arm-waving they could also probably land a plane from a runway.

Weisz is brilliantly cast with her natural warmth always peeking through. Farrell’s David is a strange hero but no less believable as he tries increasingly desperate measures to avoid the fate of his canine companion.

This is one of those satires that repeatedly clobbers you over the head with an idea that’s initially hilarious but then rather loses its sheen, in this case once David escapes from the hotel to the forest.

And for people used to habitually telling partners that they love them when they don’t (you know who you are!), the whole film will probably feel like an exercise in easily avoidable pointlessness.

Still, The Lobster is certainly a film that, the more I think about it, the cleverer it seems. It’s not a story you should question too hard beyond the edges of the world it has created, but that doesn’t matter. Because what does happen within its confines is so utterly weird, while at the same time being so utterly obvious, that it’s mostly compellingly gripping.

It felt like watching a terrible wedding reception where you know all the guests and everyone’s drunk but within their drunkenness they’re all making complete sense. And I also learned some useful tips on how to get stains out of clothes.

buy / rent the lobster on vod or buy the dvd or blu-ray from amazon.com

Watch the trailer for The Lobster: