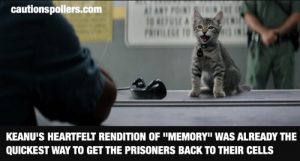 Holy shit! A film called Keanu with loads of John Wick references and a cameo from THAT Keanu got me so hot under the collar that the only thing that could calm me down right now is a cool breeze over the mountains. Still at least I found out I’d been pronouncing Keanu right after all these years. I also found out George Michael is black though “he be pale-skinned”.

Keanu is a tiny kitten, one even cuter than most kittens. Like all cats and also John Wick he has several lives, many of which are used up during this movie, but he also has nearly as many names. Iglesias, Keanu, New Jack and The Bogeyman (okay I made it up about The Bogeyman. He’s actually the cat they send to kill The Bogeyman). He is constantly finding his way to new owners, though luckily he didn’t find his way to us, or my son would have insisted on naming him StinkyWillyPants.

Initially he is Iglesias and lives in a drugs factory. When vicious gangsters the Allentown Boys attack, killing everyone inside in a parody of Wick-ian balletic beauty, with Valkyrie-like music and slo-mo backflips against pillars, only Keanu escapes with his one of many lives – eventually ending up on the doorstep of Rell (Jordan Peele). He squeaks appealingly, probably trying to tell Rell that his name is Iglesias and that he’s just witnessed a gangland killing. But Rell isn’t really paying attention – he’s a man devastated that Daisy-Not-The-Dog-From-John-Wick has left him, and needs a cool breeze, perhaps from over the mountains, to calm him down.

And as any cat lover knows, humans are only keeping the best bit of the sofa warm until the perfect cat comes along, so soon Rell has all but forgotten Daisy and is instead bonding with the breezily named Keanu. He even makes a calendar featuring Keanu in various recreated film scenes, my favourite being when he dresses the kitten up as Jason Voorhees – but only one copy, “for personal use only”, so as not to exploit his tiny furry charge.

Rell’s cousin Clarence (Keegan-Michael Key) is concerned about his newly dumped relative. Clarence is married and wears a beige zip-up dad jacket and loves George Michael. With his wife Hannah (Nia Long) leaving town for the weekend with their children and a friend’s husband as the friend is now incapacitated, he decides not to look a gift horse in the mouth and to concentrate on his cousin’s well-being.

But sadly for poor Rell, his house is burgled and Keanu disappears. Rell’s drug dealer neighbour and the probable real target tells him that the culprits are the 17th Street Blips, so Rell and Clarence head to a club where they apparently hang out.

The club is called Hot Party Vixens, or HPV for short, which should have been a Wick-like warning to them that once they dip any part of themselves into that world it’s going to be hard to shake it off.

Taken by Hi-C (Tiffany Haddish) to meet gangland boss and big cheese Cheddar, the two men have to pretend to be street (I think that’s the word – I am even less street than Clarence, in fact if I’m honest I’m more Victorian cobbled thoroughfare) and decide to call themselves Tectonic and Shark Tank, as Cheddar believes them to be the real Allentown Boys. Cheddar has Keanu but has renamed him New Jack, who is now sporting a gold chain and a do-rag, and yes I had to google as the only thing I wear on my head is a be-ribboned bonnet when I cosplay Sense And Sensibility.

Cheddar is manufacturing a new drug, Holy Shit, which is so good Cheddar says it’s like “smoking crack with God” – made up of PCP, MDMA and DMT (or maybe it was TCP, MoMA and BLT, I’m not sure) and Cheddar offers Rell the return of New Jack once they’ve helped him. But Clarence has been on lots of courses and insists on taking time out for some team building with Cheddar’s gang: “go in a circle first of all and everyone gonna say their name and then two things about yourself”.

The rest of the movie is all about rescuing Keanu, before he is kidnapped by someone else and probably renamed Baba Yaga. And lots of references to George Michael, including introducing his music to a car full of gangland drug dealing killers, and it’s a relief to know there’s no point me worrying about what happened to Andrew Ridgeley any more as I can’t help him now.

And yes there are car chases, where I hurriedly tried to calculate how many lives Keanu might have left as nobody even bothered to strap him in. Still, he survives (come on, that hardly counts as a spoiler – you can’t kill a kitten in a comedy film!)

Keanu’s famous namesake does turn up, when Clarence has a Holy Shit trip, as his spirit teacher doling out those cool and breezy aphorisms which we all know aren’t actually true: “People can’t be excellent to you unless you’re being excellent to yourself” he says, which are wise words to live by as long as you remember to forget them as soon as they have been uttered.

The characters are broad-brush though no less funny for that. Clarence constantly panics and assumes that situations which are only very bad are actually very, very, very bad: ” Oh my god are those tiny penises?” he shrieks about a necklace of merely sliced-off fingers. Rell is warm and sweet and can’t drive. Their relationship is rather touching, as are the lengths Clarence will go to help his cousin retrieve one tiny kitten. And Rell is always on hand to pull Clarence back to reality when he starts enjoying his gangster persona a bit too much: “what are you, Daniel Day Lewis all of a sudden?” he asks.

But the star of the show is undoubtedly Keanu, or probably many Keanus. (How do they do pet filming? Is a there a whole litter playing one character like all those identical twins who play the same baby in films and TV?) Kittens are cute anyway, but Keanu is uber-cute and comparing your bog standard mewing fluffball to Keanu would be like putting a small town beauty queen next to a young Elizabeth Taylor.

Keanu is consistently funny rather than constantly hilarious, but the characters are so engaging (the leads, and of the supporting cast Cheddar and Hi-C particularly), and did I mention how cute Keanu is, that it pulls you along with it. And the overall set-up is so appealing that it would take someone with both a heart of stone and an allergy to cats not to thoroughly enjoy it.

Keanu is available on vod, blu-ray and dvd from amazon uk

rent or buy keanu on vod from amazon.com

Watch the trailer for Keanu: