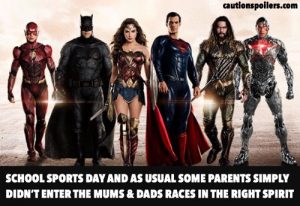 When it comes to superhero films I’ve ploughed a lonely furrow over the years, as try as I might, I can’t get my head round a grown man dressing up as a bat to fight crime. But thanks to Justice League I have finally found someone else like me. Step forward… Aquaman!

The man from Atlantis gently mocks the man who dresses as a bat, but the amazing thing about Justice League is that by the end, both of us were totally at one with the bat thing. I may even have uttered “Go Bat, er, Man!” under my breath. And Aquaman, too, is impressed when he finally sees Bruce Wayne dressed as his alter ego: “Dressed like a bat. I dig it!”

And I dug Justice League (Can I say that? I’m 46). It’s a hugely enjoyable romp, an Ensemble Assembling, where no individual superhero needs to carry the movie. It’s also funny, filled with the kind of non-slapstick humour I like (“I’m rich” deadpans Bruce Wayne sitting in his supercar when The Flash asks him what his special power is).

Superman is dead, and the world is trying, but failing, to accept it. There’s a growing sense of unease, then menace, and with no Superman to stop it what can anyone do? So in something of a self-fulfilling prophecy, into the gap steps (sorry) Steppenwolf and his swarm of bug-like parademons, on the prowl for the Mother Of All Boxes, I mean Mother Boxes.

Steppenwolf looks and sounds old-fashioned. He’s yet another fiery demon, and demonic fashion doesn’t change much across the universe, filmic or otherwise. No more horns, guys! He’s played through motion capture by Ciarán Hinds, but he looks so much like a 100-year-old Rupert Everett on his way to a Krampus Christmas party, that I kept expecting him to drop some witty bon mots about British luvvies.

And Steppenwolf likes to chat. Although he’s trying to be less talk, more action this time, having been here millennia before, when he was fought off by an extraordinary alliance of heroes.

There are three Mother Boxes. Used together they form the Unity. With this Unity, Steppenwolf can create a world on Earth like his, an overheated, fiery planet of death, though to be fair we are busy doing that ourselves so if he’d waited he could have avoided all the drama.

But the superheroes of past and present are mostly scattered. As they come together everyone seems weakened, either by self-doubt, world weariness, or simply hiding away for so long. Still, Batman (Ben Affleck) is darkly determined to assemble his team, despite the dangers. “We’re asking people we don’t know to risk their lives“ says Diana (Gal Gadot). “I know. That’s how this works” he responds.

The youngest (“we’re the accidents” points out The Flash to Cyborg, one struck by lightning, the other rebuilt after a near-fatal car crash) are the most interesting. Neither has asked for what they’ve become, or had time to get used to the idea.

For Barry Allen, aka The Flash (Ezra Miller), this is where he grows up from Justice League Intern to fully-fledged superhero. He takes no persuading to join, though once there he realises he might actually be in extraordinary danger. A modern superhero for the young, The Flash is scared but not cowardly, needing direction but happy to take it: “I never did battle. I just pushed people and ran away“ he points out nervously to Batman, before a pep talk which also leaves the younger man agency and room to grow, even if he does then rescue someone who’s technically already been rescued.

For Cyborg (Ray Fisher) the journey is darker as he comes to terms with what he is. Every time he uses his extraordinary abilities he must face how un-human Victor Stone is becoming, day by day (one of the sweetest moments is when his Cyborg toes hurt and he can’t work out why). Though learning to control his powers means he becomes a better man.

We don’t see much of Aquaman’s world, it’s more that he arrives enveloped in his own mythology and history. Aquaman (Jason Momoa) is mesmerising with his pale blue watery eyes, thick wavy hair, tattoos and muscles, whether striding unflinching into freezing Icelandic seas or accidentally giving an earnest speech before realising he’s been sitting on Diana’s Lasso Of Truth.

Wonder Woman’s scenes, and those on Themyscira, are some of the best. She takes as many beatings as the men, but still ends up mothering her teammates. And they love her. After a tense discussion between her and Batman, The Flash pipes up “you know that if she kills you, we’ll cover for her”.

Themyscira faces a greater threat, as Steppenwolf comes for the Mother Box they’ve guarded for centuries. The extraordinary actions of the queen and her Amazonian warriors to save it from his clutches are visually breathtaking: “Keep it moving!” she orders, as it’s lassoed out of its stronghold, then whipped from one galloping warrior to another, Steppenwolf in pursuit, women sacrificing themselves in an instant.

And Superman? Not everyone approves of Batman’s plan to bring him back, and Clark (Henry Cavill) is changed when he returns. But it makes him unpredictable, and superhero movies need unpredictability.

The final showdown between the League and Steppenwolf is probably the least interesting section, partly because it’s hard to create a fiery demon finale that hasn’t been done before, maybe a couple of weeks ago.

And having one female superhero among five men is rather wearying. I look forward to five women and a guy in a funny suit. The camera is sometimes leery, and there are the usual comments about Diana’s beauty or unlikely claims to the contrary (“I’m only interested in her skillset” pleads Bruce Wayne. I had that said about me in new jobs back when I was 25, though I always had the last laugh when it turned out I didn’t have one).

I’m not a comic aficionado so I don’t know who else could/will be brought into the League, though it’s heartening Diana wants a table with six chairs but “room for more”. Hopefully as it grows, it becomes more diverse.

Overall the film offers an emasculating message; the world thinks it can’t cope without Superman, so bring him back. And the plot around the Mother Boxes is confused.

But this is a tremendously witty, fun movie, fast-paced and visually striking. And everyone gets enough screentime as they save the world, one wisecrack at a time.

*** If you haven’t see Justice League yet, please note there are TWO mid-credits/post-credits scenes ***