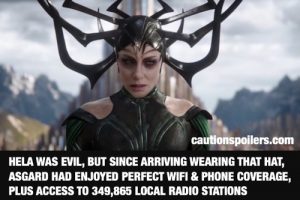 If, like me, you don’t know your avenger from your enemy, don’t worry. Thor: Ragnarok is full of useful exposition that’s wittily done. In fact the whole film is awash with gags.

You could call its humour Shakespearean, as slapstick punctures the bumptuousness and self-aggrandisement of the film’s heroes and anti-heroes, and if that isn’t Shakespearean what is?

The tone moves from comedy to murder in an instant, occasionally clunkily. But mostly the jokes are refreshing, with every pompous pronouncement followed by pratfalls and failures, even for Thor (especially Thor, who while beautiful and brave is, at times, rather earnest).

Our favourite superhero (well mine anyway now) is in chains. But this is Thor, God of Thunder, so I’m guessing he isn’t going to be tied up in chains for much longer.

Soon he’s gently turning, ok yes, still in his chains, in front of fire demon Surtur, indulging in one-sided banter as his captor is destracted from his serious posturing by Thor repeatedly spinning away from him.

There’s a prophecy about Ragnarok (demons do like to boast about what’s coming. Never apologise, never explain, Surtur); the apocalypse, which will destroy Asgard, Thor’s home, if Surtur’s helmet meets Asgard’s eternal flame.

The only way to stop Sutur is to steal his horned helmet, and Surtur, it would be harder to grab if you hadn’t put a huge handle on each side.

Soon Thor is back in Asgard where his father Odin (Anthony Hopkins), is watching a performance of The Tragedy of Loki Of Asgard. (WATCH OUT FOR CAMEOS.)

But it isn’t really Odin, it’s Loki (Tom Hiddleston) disguised as Odin (though actually it’s still Anthony Hopkins). Poor Odin has been banished to a windswept clifftop where he’s about to die – and tells his sons that when he breathes his last, their evil, older sister Hela (Cate Blanchett) will appear and take over Asgard.

This is apparently a terrible thing, though as I’m more angry about primogeniture than royalty, if Hela is the first-born then she should be queen. If she’s awful, that’s the risk you take if you favour a dynastic blood line over democracy, whether gods and goddesses, or Tudors.

Admittedly Hela is pretty terrible. And with one of her many titles being Goddess of Death, the saying “if someone tells you what they are, listen” springs to mind.

But she looks incredible, in her skintight catsuit and a headdress with so many spiky antlers she could probably pick up Radio 4. It’d certainly make Surtur jealous, with his measly two horns on his badly-designed, easy-to-steal helmet.

Thor and Loki together cannot dent her powers; she even destroys Thor’s hammer. And once she gets home who can stop her? Like Gerard Butler and Scotland, she gains her strength from Asgard – you could say she’s a Professional Asgardian.

You’ve got to hand it to Hela, she has one of those teacher voices that could keep order even without her weaponry. And once she’s home, she doesn’t waste time.

Did we already know Odin’s New Asgard was a recreation? It adds welcome depth when Hela goes through her palace uncovering ancient murals which tell her story as it was, assisting her father in murder and mayhem, rather than the soft liberal whitewashing since. It’s no surprise Hela is mad as hell. I would be if my dad used me for my death skills then repaid me by imprisoning me for eternity with only Radio 4 for company.

After the brothers’ failure to defeat their sister Thor crashes on Sakaar, a planet and giant rubbish dump, a place for all lost and unloved things (and sounding suspiciously like the shop window in Bagpuss).

She sells Thor to Sakaar’s ruler, the Grandmaster (Jeff Goldblum), a man who appears benign but is anything but (clue: he has a melting stick, and that’s not an infection).

The Grandmaster runs a Contest of Champions – “people come from far and wide to unwillingly participate” he says, rather honestly – where fighters are pitted against the biggest monster of all.

Meanwhile Thor befriends Korg, a giant made of stones. And if Korg didn’t already have the makings of a student agitator (he tried to start a revolution “but I didn’t print enough pamphlets so no one turned up”) he would make a great rock garden, one that could tell you when it needed watering. Though that’s not much use to Thor, about to face his nemesis.

But his opponent turns out to be none other than the Hulk! “We know each other, he’s a friend from work!” laughs Thor, spying the green monster, before it turns out Hulk really does want to kick the crap out of him for some unforgotten slight, which is exactly why I avoid my ex-colleagues.

But Thor needs to get home, which means a trip through one of Sakaar’s wormholes. In this case a giant inflamed-looking wormhole known as the Devil’s Anus, which sounds familiar and I think I’ve got something for it. Assembling his Revengers, Thor heads to Asgard, where Hela is trying to destroy his/her/their own people.

The scene is set for the great showdown – one sadly not soundtracked by The Bangles’ Eternal Flame, or Hammer To Fall by Queen.

Taika Waititi has crafted a deliciously funny movie, but it’s also surprisingly moving, and exciting because of the way expectations are inverted (Thor steals a spaceship with absolutely no weaponry on board as it’s the Grandmaster’s love-nest). Chris Hemsworth is terrific, his Thor aware of his own superhero status, but not entirely sure of himself once his hammer is destroyed. Blanchett’s obviously having a blast.

The scale of Asgard is impressive, as is Sakaar, in its way, with its refuse tip and 80s-era red stripes. The costumes are, like the cast, gorgeous and practical but also sexy, and defining – which if you know nothing about superhero movies, helps with working out who everyone is and what they do.

I don’t know what Thor’s relationship with Loki is like in the other films, but here Thor seems resigned, in an almost parental way, to Loki’s repeated betrayals. It’s one more situation to manage. Loki meanwhile presumably feels like the eternal outsider, and his actions are unlikely to change that.

But then I guess (cue ponderous comment on good and evil being two sides of the same coin) without Thor there could be no Loki. Or maybe there could. And everything would be simpler, but less interesting.