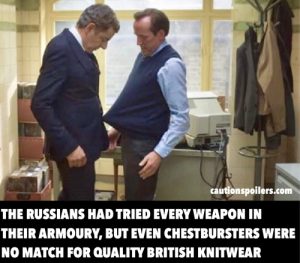 Johnny English isn’t the only relic in MI7, brought in when a cyber attack on British Intelligence outs all serving agents and the floundering Prime Minister has to find someone to take on the case.

His methods and props are just as retro: a red Aston Martin that does about 15 miles to the gallon, floppy disks, a computer with black screen and green type, exploding jelly babies, and a sherbet fountain (a yellow tube of powdered sherbet you suck up through a licorice straw, non-Brits).

The retired spy may be an idiot but he’s not stupid – an absence of modern tech makes him invisible to cyber criminals.

It’s an approach that leaves the new MI7 backroom staff baffled. “We don’t really do guns anymore!” English is told, before one is found in a storeroom and literally dusted off.

I say invisible, it’s hard to be completely unseen when you accidentally set fire to a classy Antibes restaurant, or make a huge speech to the G12 summit of world leaders from the top of some castle steps while wearing a well-oiled suit of armour before… well you can probably finish that sentence for me.

English (Rowan Atkinson, making a mostly so-so script as funny as it could possibly be) has been laying low at a British boarding school, ostensibly teaching Geography but in reality gone rogue, training up the next generation of British spies. And to be fair, he’s taught his class well: in bomb disposal, zip wires, and camouflage.

Summoned back to Whitehall on the orders of UK PM Fiona (Emma Thompson, making a mostly so-so script as funny as it can be), he turns up to find that only he and three other retired spies (played by Michael Gambon, Charles Dance and Edward Fox) are in any condition to go back to work.

An unfortunately accident with a cup of tea and a mini bomb leaves only English left from the field of applicants, and soon he and Bough (Ben Miller) are heading to the South of France, where the cyber attack originated. And it’s not a moment too soon – the attacks keep happening, with all trains reprogrammed to go to Bristol Temple Meads. This hacker certainly knows how to bring the UK to its knees. He couldn’t have done a better job if he’d cancelled Love Island and destroyed the country’s stockpile of teabags.

Jason Volta (Jake Lacy, gloriously smug in a thin role), a Silicon Valley billionaire who reacts to the word “data” the way I do to “John Lewis Half Price Sale”, appears to be the UK’s, and Fiona’s, saviour. Though of course he’s really behind the attacks, masterminding his dastardly plan from his yacht with his girlfriend Ophelia Bulletover (Olga Kurylenko, making a mostly… oh you get the drill). And Jason has a whole list of other attacks to launch, probably involving the teabag thing.

Can Johnny English and Bough save the world? Well, sort of, though it’s more a case of being in the right place at the right time – as the bumbling pair head to the G12 summit in Scotland.

Johnny English Strikes Again is very predictable. Even my 6 year old was confidently whispering to me what would happen next and he’s usually baffled by anything more complex than Snap. (Favourite part: “when Johnny English threw an iPad at the bad guy’s head”.)

But I did laugh, and my children loved it. In fact the best way to enjoy it is to treat it like a kids’ film (though be prepared to read out the subtitles when the Russians get involved). They’ll love the slapstick comedy and get a lesson in outwitting the bad guys with old school techniques, which if it works might mean no pressure to buy your 3 year old an iPhone for Christmas.

I searched for Brexit allegories, as that’s the law when it comes to British films at the moment, but it seems to be trying to please both sides. On the one hand, free movement makes English and Bough’s drive down to the South Of France problem-free. On the other, there’s a rousing speech from the PM about how great tiny island Britain is, and the villain of the piece wants every country to hand over its data to one entity.

It’s a good-looking movie: gorgeous shots of a castle rising out of the mist on the edge of Loch Nevis, glamorous French hotels and winding mountain passes.

Fiona is no doubt meant to be a more groomed Theresa May, and incompetent though she is, she knows what she wants and doesn’t mince her words. The UK national press is “a tsunami of tosspots”. She’s pretty brutal all round: “the Leader of the Opposition, has he come round from his heart surgery?” she asks, finding the affirmative answer rather depressing. (This is Thompson’s second straight Fiona, after The Children Act. Maybe she’s making a play for all film Fionas, like Judi Dench and Queen Victoria.)

Minor characters are stereotypes, played by National Treasures. I did like Bough’s new wife Lydia (Vicki Pepperdine), who is captain of a nuclear submarine so old fashioned that if you use a mobile phone near by you could accidentally set of WW3. (I’m now hoping Lydia turns up in the upcoming submarine movie Hunter Killer. I can’t imagine her taking any nonsense from the Ruskies or Gerard Butler.)

The film is 88 minutes long and to be honest that’s enough, though director David Kerr certainly keeps the pace up.

It’s breathtakingly silly. They use the word “prevaricate” incorrectly. Mostly the film has a scattergun approach to humour, with a million gags of varying length and quality tumbling around.

But in the right frame of mind, it almost works – when I saw this with my children in a packed cinema on a miserable wet Saturday it even got a round of applause at the end, and not because it had finished. Sometimes it’s clever, at times very funny (the virtual reality goggles sequence, which sees English traversing busy central London, bashing sandwich shop workers with baguettes and pushing elderly ladies in wheelchairs into traffic while thinking he’s exploring Volta’s house, is both).

The denouement has more holes than a doily, though I felt the claim that the whole of the internet is dependent on a small junction box somewhere in Scotland wholly believable, considering how many corners are cut and forgotten legacy systems are still ticking over somewhere.