You are here: Home / Film Reviews / The Children Act 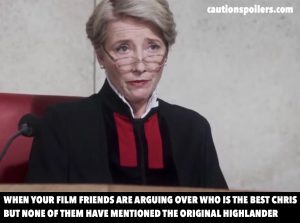 Ever wanted to rewind a particular scene while at the cinema, to try to track back on any tiny movements that might clarify intent or instigation?

There’s a scene in The Children Act between Emma Thompson’s Mrs Justice Maye and Adam, a teenager recovering from leukaemia, that seems so unlikely and out of place I nearly shot out of my seat. It didn’t seem like it could have come from her character, the highly experienced and no-nonsense judge. But there it was.

Luckily that scene – in a doorway on a rainy night – is an anomaly; the rest of the film mostly follows through on what it promises (sometimes too obviously). But this is still a fascinating and at times emotional drama.

Based on Ian McEwan’s book (he also adapted it for the big screen), the reason it does work so well is down to Thompson. She is extraordinarily good, her performance one of subtlety and understated nuance – always elegant, the judge has surely trained herself in impassivity of expression, yet so much is made clear through the tiniest movement in her face.

Fiona is a diligent and very busy judge whose career has got in the way of children and who is now in the marital dock herself, for not having had sex with her whiny husband Jack (Stanley Tucci) for 11 months.

He wants to have an affair with someone half his age who once came to dinner and bored them all rigid talking about statistics, and is impressed by his own wish to discuss this like adults – “look I could have gone behind your back!” he tells her.

Fiona barely has time in her busy schedule – for example deciding whether conjoined twins should be separated leading to the death of one, or do nothing and lose them both – to decide whether to kick him out or not.

He does go, enjoys his mini fling then reappears, which rather seems like having one’s cake and eating it. But he’s not much of a presence. To be honest Fiona’s caseload is so heavy, and some of the legal issues so troubling, I barely had time to register Jack myself.

Her husband may be a bit useless but she has a brilliant “wife” in her clerk, Nigel Pauling (a terrific Jason Watkins). His every working hour is dedicated to lifting what weight he can from her shoulders, whether he’s bringing her coffee, brushing down her robes before a trip, opening her car door for her, or sorting out reading matter.

It’s a delightful relationship to watch, and reminded me how rare it is to see women not bothering to take time out to make men feel better in a myriad tiny ways. He’s devoted to her, entirely accepting of the hierarchy of the judicial world, though while she is still touched by the emotional nature of her cases and the sadness inherent in her judgements, Nigel is rather too chirpy, and seems to have lost his empathy for anyone but her.

Her office is across the hall from the modern and functional court, though both her working life and her social life within the sector are rule- and status-bound.

The case the film revolves around is emotional but, legally, apparently not particularly tricky. The law is clear that when an under 18 teenager, Adam, refuses to have a possibly life-saving blood transfusion to combat his leukaemia, the courts should give the hospital permission to do it anyway.

Adam is 17 and nine months, and his legal counsel gives various potential medical complications if the transfusion should go ahead; there’s also evidence from his father, who explains why they object as Jehovah’s Witnesses (they believe the soul resides in the blood).

At this point the realistically calm if heartfelt legal dramas central to the various cases we’ve witnessed are left behind in a whirl of melodrama, as one lawyer orates and flourishes, and another makes doom-laden points that are both irrelevant and unlikely.

In the end Fiona decides to visit Adam in hospital to ensure he is making up his own mind and knows the consequences of refusal.

Whatever the outcome, Adam has to submit to a higher authority: God or the judge. Tellingly, the script goes to great lengths to only say Adam may die without the transfusion, not that he will; something that makes sense as the judge asks Adam to consider the possibility that without the treatment he may survive but not make a full recovery. Blindness, organ failure and brain damage are mentioned.

Adam (an unnerving Fionn Whitehead) is grey-faced in his hospital bed. He has the fixed ideas we often develop in our teens, about how we just know when something is right or wrong.

In this case the law too has fixed ideas, though Fiona comes to wonder if society has chosen the right path, if we have thought through the implications as Adam is made to do.

Soon he’s been treated and is out of hospital, looking incredibly healthily. But an unhealthy obsession is taking form in his mind, and he starts leaving long voicemail messages for Fiona. She and the doctors may have saved his life but now he’s (literally, to his church) a lost soul, estranged from his god and increasingly his parents.

As she tries to decide what to do, and Adam’s behaviour becomes more worrying, there’s a conflict between her natural warmth and concern, a sense of guilt at her legal judgement, and the distance that professionalism dictates. It’s at this stage that The Children Act goes awry.

There’s an unpleasant whiff of underlying misogyny in the way we are encouraged to hold her responsible for the problems in her marriage, and also in that unbelievable scene I mention at the beginning.

She has never had children, so does she see in Adam a son, a victim of a mistake she need to put right, or a boyfriend? It’s all very odd and emotionally lurid, and feels even more so in the light of Thompson’s brilliantly measured performance.

Additionally, some of the film’s commentary is proclaimed so loudly they might as well have given Adam’s nurses a loud hailer and a giant blackboard as they handily discuss the issue as Fiona walks past.

It’s not as if the dilemma is unfamiliar to most of us; there have been enough stories over the years about Jehovah’s Witnesses refusing blood transfusions.

I did wonder if The Children Act had ever been made into a play; its staginess and trumpeted issues would work well there, though we’d miss the tiny details conveyed by Thompson’s extraordinary face.

Watch The Children Act trailer here or scroll down for spoilers:

The out-of-character incident probably isn’t really out of character by the time it happens, bearing in mind how far Fiona has already allowed herself to stray outside of the boundaries of her responsibilities to Adam: as the judge in his case, and as an adult woman to a traumatised young man who is only now an adult himself. It’s a kiss between Adam and Fiona, as she sends him away from a meeting in Newcastle.

He has followed her on the train from King’s Cross to the country house where it is being held, and when she agrees to see him explains his previous feelings about not having a transfusion – adolescent dreaming about being eulogised at his own funeral – and how he’s changed mind. Since the transfusion he has been having huge rows with his dad. He then asks to live with her, like a lodger.

She is horrified and immediately books him a taxi to the station. He demands she explain what she wanted from him – he’s found out the transfusion was always a rubber stamp exercise, that a child would never be allowed to die for their parents’ religion. So why did she come to him and get under his skin? She takes him to the front door; Nigel is waiting there to take him to the station in a taxi and put him on the train to London. Adam kisses her and she doesn’t immediately pull away.

In London, he refuses to go to the Kingdom Hall with his parents, or have his Bible in his room. He’s also starting to look unwell.

At Christmas she’s accompanying a friend on the piano at a big legal Christmas bash. Just beforehand she gets a note from Nigel, telling her Adam’s cancer has returned and he’s refusing a second transfusion. He’s in a hospice, refuses to see his parents, and is unlikely to survive the night. Fiona sings an entirely different song to the one prepared – Down By The Salley Gardens by WB Yeats – then rushes off in a taxi to the hospice. She repeats to Adam about the life still to be lived but he says “My choice, My Lady,” (the use of this official formal way of addressing her as a judge also adds to the sort of teenage romanticism Adam has given his situation).

Fiona returns home and reads out loud one of the letters he sent to her, that he hopes his cancer might come back as then he can be free.

She tells Jack about Adam and he asks if she was in love with Adam – she says he was just a child. Adam dies and she goes to his interment at the cemetery while Jack waits for her further down. The last shot is the two of them walking down the path away from the burial.