You are here: Home / Film Reviews / Isn’t It Romantic 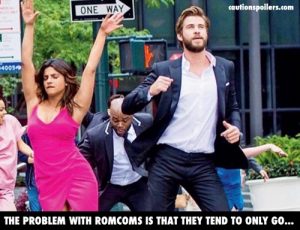 I’m delighted to say that Isn’t It Romantic doesn’t have one original idea in it.

You’ll have seen them all before, in a thousand romcoms – but director Todd Strauss-Schulson has taken those ideas, chucked them into the air then watched them fall to the ground in perfect order, a bit like if Rebel Wilson did the same with numbered rose petals only for them to gently land in the form of the phone number of billionaire Liam Hemsworth.

This is quite a slight tale, but a joyously funny one, that also manages something many have attempted but none have achieved – transforming my oozing black heart back into a deliciously pink one filled with confetti and organic berries, while leaving a tiny centre of bleak cynicism.

The young Natalie is in love with the idea of love, until her mother (Jennifer Saunders) makes clear that “someone might marry you for a visa, that’s about it”.

Now the adult Natalie (Wilson), living in NYC and working as an architect designing garages, loathes the idea of romance – and particularly romantic comedies, which her assistant Whitney (Betty Gilpin) watches all day at work.

Natalie’s life is those first few scenes of a romcom, when the heroine is set up as self-sabotaging, clumsy and scared of love. She doesn’t want to present her ideas at work. Her co-worker Josh (Adam Devine) clearly has the hots for her but she’s oblivious. Not even her dog respects her. But she never moves on to the romantic scenes because she’s so closed off to love.

One day, handsome billionaire and client Blake (Liam Hemsworth), comes to the office for a meeting about the hotel he’s building. It’s Natalie’s big chance to get across her ideas for hotel garages. He, though, assumes she’s the coffee girl.

On her way home on the subway she’s mugged, and after whacking her head Natalie wakes up in hospital, with perfect make-up and a hot doctor (Tom Ellis).

It takes Natalie a while to realise the world has changed. Strangers dancing together in the park, and her own voiceover, help convince her she’s in a romcom, though from what we’ve seen of her I suspect it’s her sudden inability to swear or have sex, indicating the PG-13 limits of this parallel universe.

New York now smells of lavender; her apartment has a walk-in closet filled with clothes, shoes and bags in rainbow hues; even the dog’s nice to her.

Her miserable neighbour Donny (Brandon Scott Jones) turns out to be her new gayest evar gay best friend. (Jones is great – despite Donny being so extreme Natalie describes him as “setting gay rights back, like 100 years”, romcom Donny, while being a massive stereotype, has his moments of genuine reflection and sadness. Real life Donny is a miserable bastard. Actually can I say the B-word in a PG-13?)

Natalie is so distracted by the scarily friendly and flower-filled city she now lives in, she gets knocked over by a car. But not just any car. It’s a stretch limo belonging to Blake the billionaire, and he falls for Natalie so quickly that in real life any woman would assume he was a weirdo, which is exactly what she does. He drops her home, does that phone number written on rose petals thing, then drives away, leaving her sneezing as her hay fever kicks in.

And Josh-from-work? He’s fallen in love with swimsuit model and yoga ambassador Isabella (Priyanka Chopra). Which is lovely for them but what if Natalie is meant to be with him instead?

This is a film that literally tells you what it’s going to do – from its romcom voiceover, to Natalie vocalising what she thinks she might have to do to escape, to her listing her most loathed romcom tropes at the start – and then does it.

Wilson is hilarious and hugely engaging. Chopra doesn’t have to do much until Natalie’s big karaoke number when she and Isabella battle over mild-mannered Josh, at which point she comes into her own. Hemsworth is cheerily one-dimensional and often half-naked. (actually it’s only once but it’s repeated several times, a Groundhog Day-like gift to all the PTA mums in the world). Blake is deliciously earnest in the way that rich, young white men often are: “Natalie, have you ever heard of a man called Gandhi?” he asks, before instructing her in another homily.

The soundtrack is a belter; not only the big musical numbers but also No More I Love You’s by Annie Lennox, which adds a mournful, soul-filled quality, the dark tinge every romcom needs.

Natalie’s not the first plus-size romcom heroine but she’s still a rarity. While real-life Whitney tries to change Natalie’s closed-off approach towards love, and romcom Blake wants her to change her name, no one suggests she should change her body. (Wilson at one stage claimed she was the first, either forgetting or not knowing about existing romantic comedies with plus-size heroines, including women of colour, such as Last Holiday – which is well worth a watch for Queen Latifah’s performance alone). Rebel Wilson is beautiful though, and Natalie a more modern version of the archetypal pretty blonde comic heroine.

The script, while requiring Natalie to follow the romcom template to escape (and learn about herself along the way), also inverts the stupider, less women-friendly tropes. A slow motion yet time-critical sprint has to be paused so Natalie can pull up her leggings, and she finishes holding onto her unruly boobs as she didn’t put a sports bra on.

The film’s designers have done a terrific job. Yes, New York is brighter, more colourful, and cleaner; but it doesn’t look like the world from Trolls. It’s heightened, sure – but apart from perhaps the white birds flying in a heart formation over the river, and Donny’s outfits, it could be any upper middle class neighbourhood. (Though granted, people living in the posh areas I know tend not to launch into a tightly choreographed dance outside the Tube station – unless Waitrose has launched a new organic Sauvignon Blanc for under a tenner, or their own little Josh and Isabella have made it through the 11+ exam to the holy grail of a free grammar school education.)

An eternal problem with this kind of comedy is treading that line between satire, and simply being a more current version of what you’re satirising. The issues with “real” romcoms also affect the more knowing version. Just as in many such movies, the character of Donny, the gay best friend, threatens to take over.

Isn’t It Romantic works though, as comedy, and satire, but also a love letter to the genre – and to the women who enjoy those movies. And it turns out to be the most rom-commy anti-romcom romcom you’ll ever see.

Isn’t It Romantic is available on Netflix

Watch the Isn’t It Romantic trailer: