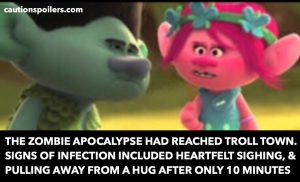 If your children aren’t sure about a trip to the cinema to watch Trolls this Halloween half-term, just say these few words to them. No, not “I See Dead People”, but “They Poo Cupcakes”.

Look I’m the first to admit I’m the very worst kind of British cynic, dropping what I think are darkly droll bon-mots from the sidelines of other people’s successful lives. I regularly post comments on other people’s Instagram posts that result in earnestly long explanations from people far nicer than me who had the good fortune not to get my joke.

But Trolls – which I saw in 3D with my feral children this week – warmed even my crusty, oozing black heart. Yes it’s rainbow fluff with unicorns and glitter on top (oh my god, THE GLITTER!) but it’s a ton of fun with a soundtrack of established songs that even the most old fashioned parent should know.

And my children – horrors that they usually are – were enchanted by the colours, songs and sheer fun. (Be warned though that the 3D version, which we saw, is slightly freaky for very little ones. My 7 year old thought it was amazing but my 4 year old was slightly stunned as a mass of playdough-coloured Trolls came hurtling towards him.)

While Trolls is simple, fluffy fun, in this age of superheroes the Trolls aren’t as anachronistic as they look – if you’re a Troll, your superpower is your hair (it extends instantly to enable swinging escapes from the “mild peril” that films like this are known for). And parents – when you leave the cinema, you are guaranteed to develop rainbow-coloured, instant-lengthening, swingy Hair Goals (I thought I had great hair but really, I have nothing on Princess Poppy.)

Trolls starts with an escape from Bergen Town, where the unremittingly cheerful, rainbow-hued little creatures have been living unhappily alongside the Bergen, a community of uglies who believe they can only be happy if they eat a Troll. One day Princess Poppy (Anna Kendrick), the King of the Trolls’ daughter, is almost lunch for young Bergen Prince Gristle. The King of the Trolls realises it’s time for them all to leave, and all the Trolls manage to escape through a series of connected tunnels (to shouts of “No Troll left behind!”). Safe at last, they set up home again some distance away.

Twenty years later, Princess Poppy is a happy, hug-loving Troll who adores scrapbooking, and wants to hold a huge party to commemorate their escape from the Bergen. Alas the light show at the party  – which finishes off with a giant firework Troll in the sky – is noticed by the Bergen chef (Christine Baranski), who has made it her life’s work to track down the Trolls and bring them back to the palace to become a selection of canapés for the now grown Prince Gristle, a young man who believes he has never been happy.

All the Trolls are pretty, colourful, glittery creatures, except for Branch. Poppy’s friend, Branch is a dull-looking troll, whose grimy colouring matches his dour outlook. He’s a prepper and survivalist who has been readying himself for the day when the Bergen come for the Trolls once more, and is resolutely unmoved by his fellow Trolls’ good cheer and rainbow demeanour. Branch has also accumulated enough supplies to keep himself going underground for 10 years once the Troll Apocalypse hits. (Unsurprisingly I identified most with Branch, though under my stairs my supplies for World War 3 / the Zombie Apocalypse / Brexit amount to lots of Chanel no5, battery-operated hair straighteners and several boxes of chocolate fingers.)

The other Trolls are so relentlessly upbeat that their watches ping regularly for Hug Time, and there’re not even annoyed by the glitter-shedding of Guy Diamond – a Troll who wears only a coating of silver sparkle (as all parents of craft-obsessed children will know, glitter shedding is one of life’s major irritants). Creek, another Troll, is the perfect embodiment of the Feeling Blessed emoji on your iPhone.

After the Chef storms Troll Town and kidnaps several Trolls, including Creek, Princess Poppy is determined to rescue them despite a lack of support from other Trolls. She heads to Bergen Town to find her friends, initially alone but later joined by a miserable Branch, less because he wants to help than that the alternative means being forced to take part in Hug Time several times a day if he stays. Once at Bergen they must face capture and almost certain death to outwit Chef and Prince Gristle in order to bring all the Trolls home to safety.

Trolls is a simple tale that has been told many times before, almost certainly in a less irritating fashion and probably not with such retina-destroying sparkle and good cheer. No children watching will be scratching their chins and discussing its political message over a packet of Haribo and a Fruit Shoot in the cinema cafe afterwards. But go in the right frame of mood and it’s really great fun.

The cast are good with lovely performances from the two leads – I STILL haven’t seen Pitch Perfect so I had assumed Anna Kendrick was an actress who sang a bit (sorry, Anna) but she has the most amazing voice (and I don’t usually say that as I’m so jealous of people with amazing voices). Justin Timberlake as Branch is very good playing against type, and Christine Baranski as Chef is the perfect villain (I would love to see a spin-off prequel about Chef, possibly aimed at those kids who get to the glum I-have-no-friends stage of growing up a bit early).

The rest of the cast is stuffed full of British and American comedians and characters actors, all of whom are well on the way to their respective country’s National Treasure status – James Corden, Russell Brand, and the rather affecting Zooey Deschanel as poor Bridget -the sad lumpy Bergen scullery maid who is in love with Prince Gristle and ends up, thanks to a deal struck with the Trolls, a total hottie in a pink jumpsuit with rainbow hair.

The soundtrack is mostly made up of established songs including – unsurprisingly – True Colours, originally by Cyndi Lauper, plus Justin Timberlake’s relentlessly upbeat “Can’t Stop The Feeling”. Naturally in an animated children’s film there are glaring errors, such as when the Trolls are held captive in a birdcage with gaps between the bars so wide any of them could simply walk out of it.

But even the Trolls know life can’t always be “cupcakes and rainbows” (surely the name of the next put-together girl group on X Factor). And while it’s not exactly Walking Dead Season 7, not everyone survives (t’s always good to teach children about the consequences of their actions, I find). Still, the ultimate message – for the Bergen as well as the Trolls – is that “Happiness is in all of us, sometimes you just need someone to help you find it.”