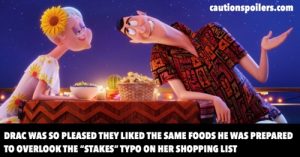 It’s been 100 years since his last date. And even though his castle hotel is always bustling with monster holidaymakers, weddings and his family, poor old undead Drac is starting to feel lonely.

He even tries online dating, but he can’t get round the fact that he and his kind only zing – the monster equivalent of love at first sight – once in their lives. Which seems a little unfair if you’re an immortal.

He’s already zinged once, when he met his long-dead wife (long-dead when they met, and long-dead again since). But his daughter Mavis (Selena Gomez) decides that what he needs to perk him up is a holiday, a chance to make some family memories.

Soon they, Johnny (Andy Samberg), little Dennis (Asher Blinkoff) and their monster chums are boarding a cruise ship in the Bermuda Triangle, necessitating the swapping of black cloaks and cobwebs for Hawaiian shirts and swimsuits.

Though despite encouragement from his friends, Drac (Adam Sandler) still claims not to be looking for a partner: “It’s not the Love Boat, Frank, I’m just here to have fun with my family”.

For him it’s also a bit of a busman’s holiday, as all the ship’s attractions – spa, swimming pool, buffets – he has at home. But once he sets eyes on Ericka (Kathryn Hahn), the attractive blonde captain, he wonders if a second zing could be possible after all.

She claims to be a monster ally. A monster monster ally in fact – but is she really? No of course she isn’t, but let’s allow Drac those long-forgotten fuzzy feelings for a little while, until she tries to kill him.

Ericka is actually the great granddaughter of Drac’s nemesis, or someone who thinks he’s Drac’s nemesis. I doubt Drac has given him a moment’s thought in 100 years. That man is Abraham Van Helsing (Jim Gaffigan), who dedicated his life to destroying vampires and monsters, but was constantly outwitted by the Prince of Darkness.

He’s survived by making himself into a homemade cyborg, his head attached to a wheelie machine on a concertinaed tube, so he resembles a cross between a Victorian-era Davros and a Henry hoover. He lives in the bowels of the ship, ironically hiding away just like Drac and his family have had to.

Van Helsing’s plan is to take all the monsters on the cruise to the lost city of Atlantis, where Ericka will retrieve the Instrument of Destruction. With all the monsters in one place, Van Helming can use the instrument to destroy all the monsters. She though is keen to kill Drac there and then, and to be fair what she lacks in skill in the murdering department she makes up for with commitment and opportunism.

They do get to Atlantis, which has been transformed into a sea-bound Las Vegas with a touch of English seaside rainy-day slot machine arcade.

Rising out of the waters, guarded by a Kraken, colourful lights flash. Soon everyone is enjoying the gambling, a habit that loses Frank an arm and a leg, I mean both arms, which he replaces with two crab claws from the seafood buffet.

The messages the Hotel Transylvania franchise offers for young children are always welcome: marginalised groups taking their rightful place at the table; loving difference while understanding we are all the same under the skin. It’s a message any child who has watched all three movies in the franchise will probably be familiar with by now, so it would have been good to have a more exciting storyline and better jokes.

Hotel Transylvania 3 isn’t a terrible film by any means. My target-audience 6 year old and 9 year old adored it (though I’d better tell you now they also loved Home Alone 4).

As well as that message – again! – admirably, it never falls back into stereotypes. Three green-skinned, gnarly witches rest their female gaze on an aged, wrinkly, body-positive demon sunbathing on deck; and everyone’s just having fun in the pool or on the dance floor.

My youngest was particularly interested in how Wanda (Mrs Werewolf) had managed to have so many wolf cubs, and my 9 year old loved it when “the Green Jelly threw up and then made a baby” which actually makes the film sound more exciting than it is.

There isn’t anything new in this second sequel beyond the (necessary) change of scene; and it does feel, to adult eyes, rather flat.

It certainly looks pretty and there are some fun set pieces – Ericka’s onboard attempts to kill Drac, of which he is blissfully unaware as Green Jelly takes several for the team, are fun. I loved the Bermuda Triangle, a literal empty-of-water triangle in the sea, filled with shipwrecks. And Ericka’s search for the Instrument Of Destruction in the ancient Atlantis ruins, as she tries to use the booby traps left by the Lost City’s previous destroyers to kill the chivalrous Drac, are a blast.

As a parent I warmed to Wanda (Molly Shannon) and Wayne (Steve Buscemi) the Werewolf parents and not just because I love alliteration. They are unable to believe their luck when they find an all-day kids club on board, handing over their entire brood and then legging it.

As a summer holiday filler Hotel Transylvania 3 works well, and frankly in this heatwave it’s worth the money to sit in one of Britain’s always-icily air conditioned cinemas and moan about being a bit chilly. If you’ve got children to take along, even better.

This is a good-humoured movie that doesn’t talk down to its core audience (neither does it talk up to their parents in the meta way of many other films, which is both a good and a bad thing). It’s undemanding and warm; their cruise stop-offs (an underwater volcano, a desert island, the Atlantis) are bright and fun.

The eventual battle between good and evil is of the DJ variety, as the rather underused Johnny attempts to destroy Van Helsing’s wicked dance tunes with the most uplifting, happy pop he can find (is this some kind of conservative subliminal imagery?)

With Drac in love with his would-be murderer, I’d like to see a darker and bleaker Hotel Transylvania 4 channelling the Brothers Grimm as Mavis fights an evil stepmother. But sadly Ericka sees the error of her ways, and after swapping sides just in time (think Italy during World War 2) soon no longer has to pretend to zing when Drac walks by.