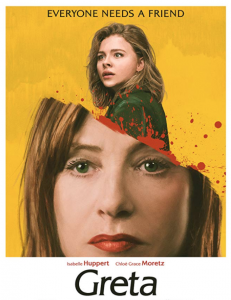 WARNING: Spoilery if you haven’t seen the trailer

I’ve categorised this as a comedy thriller, as aspects of it – Isabelle Huppert’s lusciously frenzied performance, a gleefully hideous injury (in close-up!), the shriekingly signalling music – position it like that, though the rest of the cast play it straight and there aren’t any jokes as such.

Huppert is so wonderfully histrionic as Greta, the widowed self-styled mother figure, that it’s hard to root for her victim, Frances – who’ll also lose points with Tribeca loft-living viewers for microwaving her coffee.

Greta is about a middle-aged woman who buys too many handbags. Why wouldn’t I like it? And her? And I, too, often return from a shopping trip to discover I actually have several identical items already in the cupboard.

The identical handbags Greta “loses” on the subway in the hope that helpful young women will return them to her (the scene was revealed in the trailer, which you can watch below) are fabulously shocking as Greta’s bait-and-witch technique is revealed, even though really there’s no need for them to be the same. It is, though, a brilliant visual detail which instantly conveys Greta’s sinister strategy, and in a film that’s actually very straightforward we need those shuddering “oh shit” shocks.

Frances (Chloe Grace Moretz), lives in a vast Tribeca loft with her friend Erica (Maika Monroe) who is both richer than Frances (her dad bought the apartment) and more streetwise. “You find a bag, you call bomb squad” is her Manhattan-ready reaction when Frances comes home with the handbag she found on the subway, intent on tracking down its owner. She also realises how unhinged Greta is before anyone else.

Frances works in a restaurant, cycles around the city (and their vast apartment), and tries to cope with the death of her mother a year ago. The enjoyably privileged Erica wears jackets last seen in Adam And The Ants videos, and favours colonic irrigations where asparagus juice is squirted up her butt.

Even on their first meeting – when Frances turns up at Greta’s door with that handbag, with Greta’s ID in it – Greta is already using emotional blackmail. The coffee she offers is already brewing she says, and once she sees how easily she can manipulate the kind and lonely Frances with her own loneliness, she knows she’s reeled in another victim.

Still, lots of people are odd, and I can attest that once women hit middle-age we really stop caring whether people think we’re weird or not. Even as Greta describes her husband’s illness through piano-playing, it could still, if we didn’t know we were watching a thriller about a stalker, turn into one of those age-gap friendship articles so beloved by The Guardian.

The first half of Greta is traditional stalker thriller territory as Greta is revealed to be first needy, then unnerving, then downright frightening. The second half has Huppert unleashing her inner crazy lady on the world, Greta entirely unconcerned about her very public intrusions. No bunnies are boiled though she follows, taunts, threatens, wheedles and worse, seemingly with impunity.

She’s aggressive and violent, though Huppert is often most frightening when highlighting Greta’s unpredictability, as she first declares “I love you” (still unusual to hear from one woman to an unwilling female recipient), then spits chewing gum at her victim.

Huppert’s performance leaves Moretz’s character looking weedier than her responses to the stalking imply. Moretz is a fantastic actress (check out The Miseducation Of Cameron Post, one of last year’s neglected gems, which she starred in) so it’s not that she’s outclassed by Huppert, more that Frances is one-note, and quite dull, and Moretz is swamped by her scene-stealing opponent. (Even Greta wouldn’t be very interesting if it wasn’t for Huppert extracting every ounce of madness from her character.) Ultimately, I never felt engaged by Frances and I didn’t care whether she survived Greta’s final, horrible plans or not.

Frances also does some very stupid things, including trying to escape by running down into a dark basement she’s never been into before. A private detective makes errors that even I wouldn’t make and I’m terrible at lying, and detecting. There are plotholes everywhere (though you could argue that once Greta leaves all realism behind, these plotholes perhaps seem less worthy of note). Other threads are left hanging: Greta’s previous victim, Frances’s investigations into both Greta’s web of lies and the pet dog.

Besides Huppert, it’s often the details that add interest. Greta’s little house, a pretty oasis in a semi-industrial, urban area, reminded me of the witch’s cottage in the woods in Hansel and Gretel. It’s small, elegant and dark, with bright sunlight occasionally pouring in.

This is a wayward movie, temporarily wandering off in different genre, plot and style directions, and this inconsistency means that despite sections of highly enjoyable nonsense, and its impressive cast (Stephen Rea and Zawe Ashton also appear) it also often feels very flat. There won’t be any of the arguments that raged over Fatal Attraction 30 years ago for example, around whether Glenn Close’s spurned lover Alex was also actually a victim.

Watch more: clips from the movie, interviews with the director and stars, and the Five warning signs you might have a clingy friend… teaser.