You are here: Home / Film Reviews / The Miseducation Of Cameron Post 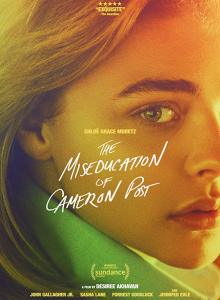 From trying to make teenagers “pray the gay away” to encouraging them to work out to Blessercise videos (imagine a Jane Fonda-esque aerobics queen teaming up with Billy Graham) the brother and sister behind gay conversion centre God’s Promise will do anything to suppress their charges’ sexualities.

This is a movie set in 1993, though apart from a few props shoehorned in (a Breeders cassette tape particularly) it doesn’t feel particularly 90s. Partly because gay conversion therapies are, unfortunately, still newsworthy, and also because some of the language, and how the characters use it, seems very modern.

There is a fun-then-poignant spontaneous group rendition of What’s Up by 4 Non Blondes with Cameron (Chloe Grace Moretz) jumping on the worktop while they’re peeling potatoes for lunch at the centre which aims to eradicate SSA, or same sex attraction, in its teenage residents. The angry intrusion of grey-faced, raven-haired Dr Lydia Marsh shows just how aware she is that allowing these teenagers to bond could be her project’s undoing.

And though there is some group therapy, much of the gaslighting and wordplay Lydia (Jennifer Ehle) utilises while forcing them to reject their homosexuality is one-to-one, where they can’t just keep quiet and are soon tied up in linguistic knots.

Lydia runs God’s Promise with her brother, the pathetic Rev Rick (John Gallagher Jr), who claims his sister successfully turned him straight. He’s way out of his depth, and hilariously gullible over the circumstances in which he was discovered at a gay bar by members of his church.

Language is both a weapon and a shield at God’s Promise. Lydia twists their words back on them, erasing their identities: “there’s no such thing as homosexuality” she admonishes. If that doesn’t work she shames them: “would you let drug addicts hold a parade for themselves?” she asks.

Meanwhile the teenagers help each other fill in their blank iceberg picture print-outs – filling in the two-thirds under the water’s surface with any and all reasons they might have developed, as Lydia puts it, “gender confusion”. The more established residents help newcomers like Cameron come up with the buzzwords and phrases that will satisfy and soothe Lydia and Rick.

The flip side to bonding is that they sometimes turn on each other for approval. They’ve quickly become expert in the phraseology of feelings, of using language to suppress what they really mean or deflect attention onto someone else. Fellow resident Helen accuses Cameron of aggression by her silence, and talks of safe spaces (a term that has been around for decades, but still rather jarrs here).

There’s a subtlety to Desiree Akhavan’s film, and its pitch-perfect performances, even while Lydia’s intentions are so piercingly cruel and Rick’s methods so embarrassingly blundering. (Though the icebergs are an occasional metaphor for the movie too, which is at times rather too quiet and stately on the surface.)

Cameron is there because her boyfriend Jamie found her having sex with her bible class girlfriend Coley – in his car, after prom. Cameron’s parents are dead so it’s her religious aunt who takes her to God’s Promise to turn her straight. She’s good at keeping her head down, as far as they’ll let her, but eventually the relentless pressure affects even her.

The other residents are either holding out or trying to convince themselves that Lydia and Rick are right. Cameron’s roommate Erin (Emily Skeggs) is wide-eyed, desperately exercising to God-approved workout video Blessercise. (The makers of Blessercise also seem entirely oblivious to the meaning of the giant rainbow in their backdrop.)

Soon Cameron is gravitating towards Jane (Sasha Lane) and Adam (Forrest Goodluck) – “the native American David Bowie” Jane calls him – sneaking away to smoke homegrown drugs which Jane hides in her false leg.

It’s a film that becomes more dour as the implications of Lydia’s work take effect and everyone becomes ground down. The flashbacks showing why they’re there (Adam sewing with his mother, Erin watching sports with her dad) are a tonal shift but work extremely well as some very necessary light relief.

It’s a system that is always going to fail, especially as pre-internet, Lydia and Rick are giving young people who may not know any other out gay people an instant group of friends who understand just what they’re going through. (I loved the title for just this reason; attempted re-education gone horribly wrong.)

Moretz is superb: wary and watchful. Even before God’s Promise, the look of utter resignation on her face as Cameron goes through the motions of heterosexuality with Jamie shows how even though she doesn’t identify as anything but herself, she knows exactly who she is. Moritz cleverly holds steady that balance between forthright self-belief and showing how even she is gaslighted enough to start to question herself. (She is, after all, only a teen – it would be unlikely if she could hold out against the pincer grip of the relentless Lydia and nice-but-dim Rick for ever.)

Cameron’s love and sex scenes are urgent and sexy but without a hint of male gaze around them. That some are dreams just makes her youthful sexuality even more realistic.

Gallagher is very effective as the lonely Rick, who is suppressing so much of what he really knows to be true; not only that he’s gay, but that the teenagers aren’t his friends and all despise him. Lane and Goodluck are solidly entertaining, their characters terrifically determined to subvert God’s Promise under the radar. Though the character I felt for most was poor Erin – open-faced, desperately channelling fake enthusiasm, too terrified to stop even for a minute (though infinitely happier when she does).

It’s interesting watching it from the UK, because the two countries have such different attitudes to religion. The UK still has a problem with homophobia, but the very religious right doesn’t hold sway. While the UK hasn’t been a conversion therapy-free zone (thankfully it’s now going to be banned here), religion has always had less of a hold than in the US, and operates very differently.

This is a slow-moving film. And you won’t come away from The Miseducation Of Cameron Post feeling all the threads have been tied up, which works on two levels. First, changing attitudes is a process not a sudden switch. Second, it reinforces what teenage coming-of-age situations are like: fleeting friendships and bonds that have a huge affect on us, and stay with us years down the line.