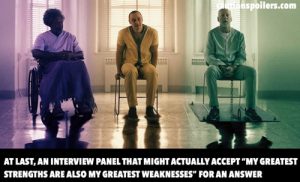 For much of Glass‘s running time, it feels as if director M Night Shyamalan is sticking two fingers up to everyone who looks down on superhero movies, those who love them, and possibly film critics too.

He has a lot of fun while doing it: in a story about comics and what makes a superman, a magazine advertising the tallest tower in the world is emblazoned with “It’s a MARVEL!” And I loved that one of Kevin Wendell Crumb’s personalities is a terribly well-spoken professor of cinema (mostly Japanese, 1950s to 1990s). There’s even a spoiler for The Exorcist.

Taking them back to basics, Shyamalan’s superheroes and supervillains are stripped down to the essence of their powers, their image and story tropes, and in a rather homely, everyday way. It often feels very self-referential. Is Shyamalan Mr Glass? I expect so.

We find out more about the pasts of Kevin Wendell Crumb, Elijah Price and David Dunn, and how everything links together in this familiar universe of homespun superhumans.

Looking down on them during their final showdown – on a tarmacked hospital drive, of all places – they look like the superheroes and supervillains we don’t want but maybe need right now (and none of them is called Chris).

Glass feels meandering, and the middle section is held back by being mostly in one place. That’s not to say it isn’t entertaining, and informative – I learnt more about comics than from many a glossy blockbuster superhero movie – and it’s by no means a disaster.

But though the confines of the genre give it structure (often a triangular one), I never felt engaged. I watched it, it didn’t drag, it was interesting. I just wasn’t bothered whether anyone lived or died (except four cheerleaders, kidnapped by Crumb or one of his 20 personas).

Lack of engagement with the viewer is never the intention of a filmmaker, unless they’re aiming for some obscure indie art prize loathed by the Daily Mail. Yet not really caring about the characters in Glass didn’t take away from the twists piling up and movie tropes raining down, both utilised and satirised.

And despite its flaws, there are several high points: James McAvoy is breathtaking as the many personalities of Kevin Wendell Crumb; Samuel L Jackson’s eye twitch, as the fragile Mr Glass sits in his wheelchair, is as mesmerising as Crumb’s transformations.

McAvoy switches between prim Patricia, 9 year old Hedwig and numerous others with ease. It’s only when we witness Crumb turn into the Beast that he seems pained, and it’s like the first few seconds of the transformation in American Werewolf In London. (Neither deserves their fate, both are creations of another.)

The last time we saw Crumb was in Split, the middle film in the Eastrail 177 trilogy (named after the train derailment in Unbreakable that killed all its occupants except Dunn, who was entirely unharmed). Crumb’s many personalities had finally been given a name – The Horde, led by The Beast, a terrifying creature with superhuman strength and pulsating veins, and the ability to crawl up walls and across ceilings.

This film is the final showdown, that stage of epic battles and finding out how everything links together. (Mostly.)

In Glass, Crumb is in yet another dank, dark basement, this time with those cheerleaders he’s holding captive. His personalities spin round the young women, sometimes literally as he rollerblades around the cellar; he tells them the Beast is coming for them soon. (I did like it later when, all chained in a line in their cheerleading costumes, they moved as one, their movements mimicking a choreographed dance.)

He and his son study the nicknames the internet gives him; The Overseer’s actions may be small scale, but they’re the best ones for getting the attention of the internet.

Dunn, who can see people’s crimes when he touches them, finds and releases the young women, but his fight with the Beast leads to both of them being taken to a local mental health facility.  Elijah Price (Jackson) – Mr Glass – is already being held there, for mass murder and terrorism. Heavily sedated, he’s visited weekly by his mother.

Their psychiatrist is Dr Ellie Staple (Sarah Paulson), an idealist whose commitment borders on zealotry.

Her area of expertise is delusions of grandeur, specifically people who believe they are superheroes; and she has three days to convince Dunn, Crumb, and Price that they are normal people.

She thinks the planet needs to be protected from people like them, who think they are special when they are not (don’t we all think we’re special? I know I do). She has methods to control each man: water for David (his weakness), sedatives for Elijah, and a machine that flips Kevin from one persona to another, should the Beast appear.

Cameras are everywhere. Soon Casey (Anya Taylor-Joy), one of Crumb’s captives in Split appears, wanting… closure? To help him? I’m not sure, but here she is, perhaps another trope made real (films love a good dose of Stockholm Syndrome).

Staple sounds like one of those people who purse their lips at comic books and their heroes; a mixture of contempt and brisk sorrow threads though every monologue (she does love a monologue). Watching her sitting in front of all three men in a hospital hall, it resembles an Agatha Christie denouement. She’s like Poirot, unable to resist telling the arch-criminals how they did it. All their superhuman abilities can be explained, she says: old, rusting bars aren’t that hard to pull apart; cold reading can tell you so much about someone.

David may be convinced. Elijah is not: “everything extraordinary can be explained away, and yet it is true”.

But super-enemies can team up to beat a common enemy. Elijah likens himself to the brains. That superhero / supervillain dynamic, with a puppet master pulling both the strings, is so tempting.

It’s a film of potholes and plot-holes, and motivations that are sometimes baffling. By the end nothing surprised me (a paradox of the mainstream, glossy superhero movie genre is that nothing is surprising), though it didn’t massively interest me either.

I do love closure though, and this is, completely, the end, of a trilogy that we didn’t even know had a sequel until the last scene of the sequel.

Though Glass‘s last battle, after they’ve escaped from captivity, is rather prosaic (including that pothole). The threads are tied up, even if not in ways that many people will find satisfying (maybe this is another joke on us – be careful what you wish for).

I don’t do this often but I have put the ending below – scroll down way past the trailer (though you’ll enjoy the film more if you don’t know!)

Watch the trailer for Glass:

Elijah Price, David Dunn and Kevin Wendell Crumb are all killed (David is drowned in a pothole. I know, what a way to go after all this time). Dr Staple turns out to have known about superhumans all along, and is part of a group that aims to prevent the world finding out. She destroys the hospital camera footage but it turns out Elijah has streamed it to an external website, and once it hits the internet, the world knows that people capable of superhuman feats do exist…