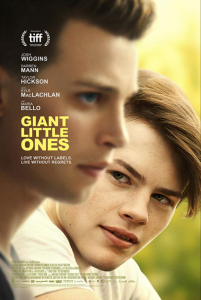 I’m baffled by modern adolescence, and can hardly believe myself that back in the ’80s mine was modern too.

Luckily Keith Behrman’s film leaves me with a sense of hope for my own children’s upcoming teen years, which may have more in common with my own than I feared.

In Giant Little Ones Behrman, who wrote and directed, has crafted a beautifully-judged story about that tricky time that doesn’t shy away from difficult subjects.

There’s a distinct lack of mobile phones – they are there but they aren’t used every interaction, with everyone cycling to each other’s houses or to the park. Losing the ubiquity of teenage technology means we lose the obvious differences between then and now.

Bullying takes place in school corridors with “slut” scrawled on a locker door, or outside local shops under cover of darkness, rather than mass pile-ons on Instagram or Twitter. It’s still horrible and violent, and from a storytelling perspective more viscerally shocking.

Franky Winter (Josh Wiggins) lives with his sister Deanne and mum Carly (Maria Bello). His dad Ray (Kyle MacLachlan) has left to live with his boyfriend.

Carly encourages Franky to rebuild his relationship with his father but Franky is still furious, rejecting any advice. “You should write a book” he tells his dad sarcastically. “You should read a book” responds Ray.

An incident at Franky’s birthday party is the catalyst for what comes later. Franky’s best friend Ballas (Darren Mann) stays the night, and something happens. We only see the bed covers moving, which leaves a sense of ambiguity over who made the first move.

Ballas can’t cope with what this might mean (and what others might say about him), and tells everyone his version of events. Franky, who has a girlfriend, finds himself increasingly ostracised at school.

Behrman clearly understands the confusion and nuances of teenage identity – those constant clashes between two different viewpoints that a teenager might hold at the same time. It’s Ballas who earlier in the film has stood up to a swimming team bully threatening another teammate for being gay.

That sense of ambiguity is maintained throughout the film; whether Ballas or Franky made the first move that night doesn’t matter. Instead it’s about young people learning to live with fluidity: not putting themselves under even more pressure to conform, or label themselves and each other.

Part of being a teenager is finding others like you (ironically something the internet is very good at facilitating, allowing people of all ages, but particularly young people, to find their tribe). Franky finds solace with Ballas’s sister Tasha (Taylor Hickson), who has been viciously slut-shamed at school. Hickson is excellent – wary and damaged but taking a chance on a potential kindred spirit. Tasha is vulnerable, in the process of turning her fragility into brittleness; her relationship with Franky helps her trust again. Arising the way many teenage friendship-based romances do, neither feels obliged to define it.

Tasha knows Ballas well, including his habit of changing the narrative to fit his own needs, though most people are surprised by how far his internal self-loathing will take him.

There’s a sliding scale of parental success in Giant Little Ones, though everyone is trying hard. Ray is flawed yet thoughtful, and by the end has shown himself to be wisest of all. Carly is trying to do the right thing while still reeling over what it means for her own identity and sense of self-worth after her husband left her for a man. Ballas’s dad is so careful of his daughter after what she’s been through, he misses the dangers of his son’s confused and wrongly-focused rage.

If this all sounds depressing, Giant Little Ones balances turmoil and anger with freshness and humour (often together). The film boasts two key scenes that are hard to forget. One is between Franky and his friend Mouse (Niamh Wilson), who’s starting to explore a trans identity. “I’m a girl who likes to pack” Mouse earlier explains to Franky when he spots the homemade fake penis down Mouse’s trousers. Now Mouse asks Franky for help in understanding what a teenage boy actually looks like, and embarrassment meets true teenage friendship head on in a scene that’s both incredibly touching and hilarious.

The other scene is a one-to-one conversation between Franky and Ray, who has the benefit of age and hindsight when it comes to sexuality and life in general. His message that there’s no need for Franky to label himself at such a young age (or at all) is precisely what his son needs. It’s a gorgeous conversation coming from a place of intense love and hard-won experience, and MacLachlan is wonderfully nuanced, making Ray sympathetic but without diminishing the pain his actions caused his family.

Giant Little Ones looks for the similarities in our experiences, rather than focussing on how different life is now. Most of the underlying questions and conflicts, with peers and in their own minds, don’t really change. Both Frankie and Tasha are victims of age-old intolerances. It’s the inescapability and intensity of social media and mobile phones that are new.

And at its centre is the remarkable Josh Wiggins. Funny and engaging, his portrayal of a teen navigating isolation, confusion and other people’s pain is sublime. (And if anyone ever films a Matt Damon biopic, Wiggins would be a shoe-in for the younger version.)

Giant Little Ones is a witty, shocking but ultimately hopeful film, that’s never afraid to ask us to watch and listen. It’s beautifully paced, with an underlying sense that while in some ways nothing ever really changes, that doesn’t mean teens should be left to navigate their own way through.

Giant Little Ones is part of this year’s Canada Now showcase of Canadian films, which will be touring UK cinemas from 1 July 2019. Giant Little Ones goes on general release in the UK in the autumn.

Watch the trailer for Giant Little Ones trailer: