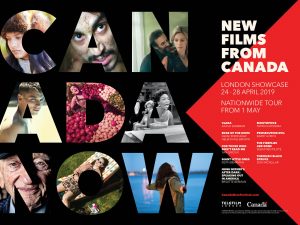 Bringing the best of new Canadian cinema to the United Kingdom, the annual Canada Now Film Festival returns with a London showcase next week, from 24th to 28th April 2019, followed by a UK cinema tour  from 1 July.

The festival opens with the London premiere of Keith Behrman’s Giant Little Ones, a  powerful coming-of-age drama starring Kyle MacLachlan and Maria Bello.

There’s also a live performance from Canadian filmmaker Daniel Cockburn of his surreal, autobiographical show How Not To Watch A Movie.

All screenings are hosted at Curzon Soho cinema in London, unless stated. Check out the list of films below and scroll down for more information on each film (and trailers if available). You can find out more and buy tickets at http://canadanow.co.uk/

Franky Winter (Josh Wiggins) and Ballas Kohl (Darren Mann) have been best friends since childhood. They are high school royalty: handsome, stars of the swim team and popular with girls. They live a perfect teenage life – until the night of Franky’s epic 17th birthday party, when Franky and Ballas are involved in an unexpected incident that changes their lives forever. GIANT LITTLE ONES is a heartfelt and intimate coming-of-age story about friendship, self-discovery and the power of love without labels.

Read my 4/5 review of the film and watch Giant Little Ones trailer:

Based on the Giller-Award-winning novel, THROUGH BLACK SPRUCE is the story of a young Cree woman whose disappearance triggers events in two worlds: in Moosonee, the remote Northern Ontario community she fled years ago, and Toronto, where she modelled before vanishing. Her twin sister, at home hunting moose in the North but a fish out of water in the city, reluctantly heads south to retrace her sister’s steps. The two worlds collide when the fallout from the missing woman’s troubled life comes to a violent head, back in Moosonee.

Haida Gwaii, 1800s: At a seasonal fishing camp two families endure conflict between the nobleman Adiits’ii and his best friend Kwa. After Adiits’ii causes the accidental death of Kwa’s son, he flees into the rainforest, descending into madness and transforming into Gaagiixid – “the Wildman”. When the families return in the spring, they discover Adiits’ii has survived the winter. Can he be rescued and returned to his humanity? Meanwhile, Kwa wrestles with his deepest desire – revenge. EDGE OF THE KNIFE is a startling, absorbing drama from the producers of The Fast Runner and Searchers.

Edge Of The Knife trailer:

The freedom to speak out, to freely express one’s individual ideas, and to be accepted for being different resonates at the heart of HUGH HEFNER’S AFTER DARK: SPEAKING OUT IN AMERICA – a documentary by Academy Award-winning filmmaker Brigitte Berman. The film features the most cutting-edge personalities, open and frank dialogue about pressing social concerns, and the most captivating performances from Hugh Hefner’s landmark TV series, Playboy’s Penthouse (one season, 1959-1960) and Playboy After Dark (two seasons, 1968-1970) .
Back to top

CLARA tells the story of Isaac Bruno, an astronomer consumed by the search for life beyond Earth. Convinced that the universe is a dark and lonely place, Isaac meets Clara, an artist who shares his fascination for the wonders of space. Their unlikely collaboration leads to a deep connection, and a profound scientific discovery.

All his life, Yves dedicated himself to poetry, carrying his suitcase to any couch that would welcome him. When he storms into Dyane’s life, a graphic designer who falls for his charms, her son Marc immediately disapproves of this eccentric stranger in his mother’s bed. But the studious teenager soon finds Yves’ rebel ways contagious and begins to explore his own artistic side. Loosely based on the life and work of the late Quebec poet Yves Boisvert (1950-2012), Giroux’s debut feature is an impressive tale of one man’s unusual quest for and expression of the meaning of life.

For Those Who Don’t Read Me trailer:

Summer is near and classes are coming to an end in a former industrial town on the end of a large bay. Léo, a young and disaffected girl, meets Steve, a reclusive and aimless guitarist. Léo lives with her mother and stepfather Paul, a populist radio show host who forced her father into exile up north. Sylvain, Léo’s father, is a dethroned union leader whom she greatly misses. A stranger in her own world, frustrated and angry, it is through her budding relationship with Steve, set to the rhythm of their guitar lessons and her new summer job, that she’ll be able to find some kind of comfort and ultimately take flight.

The Fireflies Are Gone trailer:

HOW NOT TO WATCH A MOVIE (Daniel Cockburn – 60 mins)

Filmmaker Daniel Cockburn presents this one-man show that’s been likened to the work of Spalding Gray and Charlie Kaufman. What begins as a look at 1990s ​horror films quickly goes down a cinephilic rabbit hole, becoming a weird, funny, mind-bending autobiographical journey through two decades of overinterpretation and paranoia. This is a live performance.
Back to top

MOUTHPIECE is a powerful, funny and highly original look into the conflicted psyche of Cassandra Haywood, a fiercely independent millennial woman. Cass is a single writer who lives by her own rules. She’s also a bit of a disaster. Following the sudden death of her mother, Elaine (Maev Beaty) she finds herself in crisis, unable to think straight with a debate raging inside her head. This movie makes that invisible conflict visible: Cassandra (Amy Nostbakken & Norah Sadava) battles it out while figuring out what to say at her mother’s funeral. What unfolds is a wild careening through grief, anger, sex and self-sabotage in an exploration of the messy lives of women from both generations.
Back to top

Barry Avrich’s gripping new documentary tells the fascinating story of Ben Ferencz —the last surviving Nuremberg prosecutor and lifelong advocate of “law not war.” After witnessing Nazi concentration camps shortly after liberation, Ferencz became lead prosecutor in the Einsatzgruppen case at Nuremberg, which has been called the biggest murder trial in history. He was 27 years old and it was his first trial. All 22 Nazi officials tried for murdering over a million people were convicted. Ferencz went on to advocate for restitution for Jewish victims of the Holocaust and later for the establishment of the International Criminal Court. His fight for justice for victims of atrocity crimes continues today. (Playing at the Phoenix Cinema, East Finchley.)

The festival is a collaboration between Telefilm Canada, in partnership with the High Commission of Canada in the United Kingdom and with the support of the Quebec Government Office in London.

You can find out more and buy tickets at http://canadanow.co.uk/