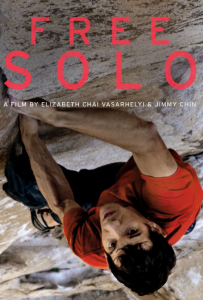 *** Check out the Vanity Fair video about filming Free Solo at the bottom of the page (review not spoilery, video & trailer are) ***

I wouldn’t call Free Solo a comedy but there are some very funny moments, and the comment “that’s the most magnificent crack on Planet Earth” certainly raised a titter from the audience I watched it with.

But allow us that moment of Carry On-esque levity, as the scenes afterwards shredded my soul let alone my nerves.

The crack in question goes up a large part of El Capitan, a 3,000 foot high cube of rock in California’s Yosemite Park that Alex Honnold wants to summit – without ropes.

Alex, free solo climber extraordinaire and the subject of this stunning and terrifying documentary (so terrifying I’m not going to spoiler the outcome as I want you to suffer as I did), is a perfect subject.

He’s so entirely matter of fact, and honest, that we find out pretty early on what kind of man he is. This honesty makes his disarmingly engaging, rather than rude – and it’s soon clear that it’s his personality traits that make him such a good free solo climber.

Free soloing is climbing without any ropes (free climbing can use ropes and other equipment to prevent injury but not to aid ascent). Alex prepares for free solo climbs by going up several times first with ropes, diligently noting every tiny handhold, minuscule ledge and finger crack. It’s like rock braille.

Hugely methodical, leaving nothing to chance, crucially he’s also less swayed by feelings; an aborted climb frustrates him but he knows it was the right decision.

There are four big questions woven into this documentary by Elizabeth Chai Vasarhelyi and Jimmy Chin. Why does Alex do it? Should people try to hold him back from something so dangerous, particularly now he has a girlfriend, or if he has children? Should the climb be filmed? (Alex isn’t sure.) And how much would filming affect his performance and his decision-making? (Co-director Chin isn’t sure.)

Alex talks about how he reconciles the risk of death with the pleasure he gets from his climbs, and there’s a difference, he points out, between risk and consequence. The risk of him falling, if he prepares, is not that great; the consequences if he does are probably life-ending.

And my sympathies are with Alex, when it comes to whether anyone should try to stop him. The world needs outliers who push the boundaries of human achievement, and anyone becoming involved with an Alex presumably knows that. (I can say that, cheering you all on, from my comfy chair that I probably wouldn’t risk standing on.)

Whether the camera and its operator can ever be impartial observers is key to Chin, a situation heightened when the subject is your friend and the stakes so high. The dynamic changes. Will Alex push on further or take a risk because of the cameras? (One could add, nowadays, if it’s not recorded on film, did it ever really happen?)

It’s such a weight on him that Chin almost seems to be trying to absolve himself of future responsibility when Alex aborts a climb – now we know that Alex will stop when he feels he should, any future mistake can’t be as a result of their filming. (I can see why Chin does this. The pressures on him are extreme; at times he and the other climbers in the team reminded me of parents whose hearts say it’s best to let their children fly while their heads tell them sometimes home is best.)

As the world shrinks, the number of *firsts* reduces with it, with those left becoming more niche. A first summit of Everest, a first summit unsupported, a first summit alone without oxygen. I could google the first summit wearing only vest, knickers and a thick coating of insulating lard, but there’s no need as during one of Alex’s climbs in Free Solo we see him move past a man dressed in a pink bunny onesie, several hundred feet up.

The reason George Mallory allegedly gave for wanting to climb the world’s highest mountain was “because it’s there”, and I often wonder how much a physical challenge being the ultimate – biggest / most technically difficult / coldest – defines whether an attempt on it will be a success. What if these huge mountains, sheerest cliffs, deepest lakes, or coldest and most unforgiving environments were, say, 15% more so? Does the desire to be the first mean everything can, eventually, be overcome? Would they have been conquered at the same time or later?

Alex’s climb is a terrifying and tense watch – our audience was rent with oohs, arghs, and sharp intakes of breath. The camera zooms in and out. We see him smiling and pausing in relative safety (balanced on a teeny ledge), then as a tiny dot in a red t-shirt crawling slowly upwards.

Alex’s honesty extends to his relationships, which he navigates in the same way he navigates his free solo climbs. He has to discover the handholds and safety ledges, from learning how to hug to talking about feelings. The difference is that if he were the type of person who could do all that instinctively, he might be more likely to fall off a sheer cliff face.

The appearance of his girlfriend Sanni McCandless changes life for Alex in his converted van as much as the film crew changes his free solo climbs.

She’s only been there a short time when he falls off a rock – twice. It’s a shock to him and his climbing colleagues, but it also serves a purpose for the filmmakers as it makes him vulnerable. Before then he seems invincible, and every hero needs to be vulnerable for us to root for them.

Vasarhelyi and Chin’s film is both thoroughly engaging and a marvel of inhospitable movie-making (respect to its cinematographers Chin, Matt Clegg, Clair Popkin, and Mikey Schaefer). Looking back I can see how it took me on a nail-chewing journey, but it didn’t feel manipulative. Though not everything in the film is explained: his parents remain enigmas. I’m not even sure I entirely get why Alex does it, though I know how.

Free solo climbing is a young person’s game, so I breathed a sigh of relief as the elder statesmen appeared, if only to prove there are some retired free solo climbers: Pete Croft is delighted when Alex shows he can stop part-way when the time isn’t right. Not everyone dies, though it’s shockingly dangerous, as a montage of obituaries and in memoriam magazine covers of smiling, shaggy-haired climbers attests.

Read my review of Dirtbag: The Legend Of Fred Beckey, a documentary about the American climber