You are here: Home / Film Reviews / Dirtbag: The Legend Of Fred Beckey 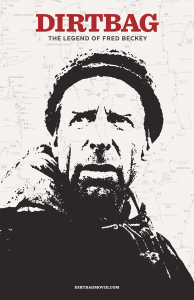 *** Read my interview with David O’Leske, director of Dirtbag: The Legend Of Fred Beckey ***

Paper salesman. Insurance. Gold stolen from a crashed plane in the Canadian wilderness. No one was entirely sure how Fred Beckey, American climber extraordinaire, made the money that allowed him to spend most of the year pursuing his passion in the US and abroad. The truth is apparently more prosaic – that he invested wisely early on, and lived a frugal life.

His food bills were minimal thanks to his habit of eating days-old food from his knapsack, taking extra ketchup and sugar sachets from fast food restaurants, and keeping an old MacDonalds cardboard coffee cup so he could claim their free refills.

But how he survived (in every sense) in a climbing career that lasted from 1939 until just before his death in 2017 at the age of 94, is part of the mystique that swirls around Beckey, a refreshingly straightforward interviewee who would probably laugh at the very idea that he was at all mysterious. It’s often that mix of the ordinary and the extraordinary that makes achievers like Beckey so fascinating.

The title calls him a dirtbag – “a person who dedicates his or her entire life to climbing, abandoning employment and other societal norms in pursuit of their nomadic lifestyle” – and it’s a tag that both does and doesn’t fit him. It’s easy to pigeonhole him as a loner and a risk-taker though he appears to have been neither. (He had lots of friends, though he seemed to get through climbing partners at quite a rate.)

The old photos of the handsome Beckey and his friends on the mountains play into the romance of mountaineering, as do the peaks’ names: Mount Despair, Forbidden Peak, Inspiration Peak. He was incredibly handsome in his youth, looking like an American hero, and in many ways he was one. Living on the road, accomplishing incredible physical feats, is surely one side of the American dream. (Once in his 80s he most resembled the Rolling Stones’ Keith Richards, grey hair sticking out of his head at angles, with the look of a man who has lived his live well and entirely on his terms.)

Director David O’Leske’s film shows Beckey in all his glory, whose imperfections (unwillingness to compromise might be a better phrase) both helped him succeed and held him back. O’Leske steers a steady course, bringing Beckey’s incredible achievements to the fore while avoiding the perils of myth-building. Often it’s Beckey himself puncturing our bubble of breathless awe.

Beckey wasn’t much of a team player and was deliberately excluded from the American expedition to the Himalayas in 1963. Instead mountaineer Jim Whittaker was invited, becoming the first American to summit Everest.

He may have been upset at the time but in old age regretted nothing, and like his climbing didn’t choose to look back. Beckey was never interested in promoting himself, in advertising deals, or being on the cover of Life magazine.

Climbers talk of the exhilaration of being the first to tackle a route, of having no knowledge of what is coming. Beckey’s list of first ascents and other key climbs is astonishing.

His accomplishments began before he was out of his teens. In 1942 he and his 16 year old younger brother Helmut made the second ascent of the south face of Mount Waddington – an incredible feat. It was another 35 years until the next successful summit via that route. (So singleminded was Beckey that when Helmut gave up climbing, Beckey simply stopped contacting him.)

It’s said during the film that a key facet of a climber’s personality is accepting rejection. Beckey was the same with women, simply moving on to the next one if rebuffed (and there were many who didn’t rebuff him). He professed a love for “tall dirty blondes” but the real love of his life was a brunette (he named Vasiliki Ridge after her).

There’s a lovely old-fashioned scrapbook quality to this film, detailed memories of an exciting past. Aside from the interviews, there are old colour movies of Beckey and his friends climbing from 1939 onwards (1940 was a particularly good year). There are black and white snapshots of camps and climbs, with handwritten notes on scraps of paper. Lightly drawn animations of Beckey and his friends illustrate fallings-out and his pink Thunderbird car. Yellowing newspapers report his achievements; I particularly loved the doom-laden voiceover during footage of their perilous first ascent of the north face of Mt Edith Cavell in 1961.

None of the film’s talking heads seemed to dislike him even if he’d been, frankly, a pain in the backside. (My one complaint is that after these speakers make their first appearance we are rarely reminded who they are when they turn up again later in the voiceover. I often wasn’t sure if I was listening to a close friend, biographer, climbing partner or family member. It would have made it easier to work out where they were coming from with their comments.)

There are similarities between Beckey and Alex Honnold, star of Oscar-winning documentary Free Solo. Both are personable and straightforward yet challenge us by not caring what we think. Both stand out in a crowd of climbers who are already driven and single-minded. Both are uncompromising but are also terrific examples of how outliers should be left to get on with it. It’s not like they don’t know the risks, whether it’s physical dangers or missing out on family or relationships.

We live in a society that claims to promote individualism and being true to oneself but it’s all rather Monty Python: “we are all individuals!” we intone as one. It’s important and refreshing that people can genuinely live on the edges doing their own thing like Beckey (and Honnold).

Even towards the end of his life Beckey was moving forwards, working on a final book: Fred Beckey’s 100 Favourite North American Climbs. His research involved attempting to summit four final peaks, still climbing up rock faces then abseiling down, his mind razor-sharp while his body declined (though not at the rate yours or mine will!)

“I just scratched the surface” said Beckey, reeling off a list of places he never got to climb. It would be doing this fascinating and highly entertaining documentary a disservice to say it has done the same, though I don’t think we can ever get to the heart of him. What we do get is a portrait of an outsider whose way of life makes the world a better place for all of us.

Certainly Beckey was acutely aware of where he fitted in to creation, of his own temporary state (whether a few minutes on a summit of a mountain, or awareness of humanity’s mortality) compared to the enduring peaks he climbed. But men like Beckey and Honnold always remain enigmas. Knowing why they act as they do would be like finding out the answers to life’s great mysteries – momentary fascination and triumph followed by a crash and “I didn’t really want to know that after all!”

Fred Beckey died in 2017, aged 94, still a legend in all its meanings. There’s an in memoriam at the end of the film, to all the old climbers who have died since taking part. It makes a welcome change to see how many lived how they wanted on the mountains (even if not to the extremes of Beckey) and still made it to a ripe old age.

Watch the trailer now and scroll down for images: