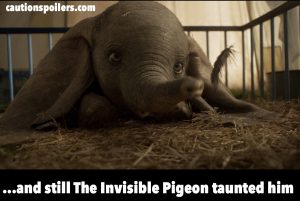 Never let a mother hear you call her baby ugly. Like elephants, we never forget.

Poor Dumbo (though at this point he’s just known as Baby Jumbo) is a disappointment when he’s born, looks-wise. Maximilian Medici, owner-ringmaster of the Medici Brothers Circus, is expecting the little elephant to make him a fortune, but those enormous ears turn him into a laughing stock on his first outing into the ring.

Even worse for the poor baby, his mum, Mrs Jumbo, has been returned to the seller.

One of the highlights of this live-action remake is Dumbo’s emotional responses, though this does mean a lot of welling-up as the poor baby looks for his mother, or they entwine their trunks and Dumbo knows he’s safe, for a while at least.

He really is beautifully realised. It’s not just that he’s cute – there’s something about that mid-air lumbering quality as he finds his wings, so you’re never entirely sure if his flight will be a triumph or end in disaster. He’s chunky and ungainly, but his delight when he flies and the emotions reflected in those huge, expressive eyes are genuinely moving. Whatever the outcome, his triumphs are our triumphs and his disasters are our disasters.

There’s a very sweet scene with Dumbo mesmerised by giant pink bubbles blown by dancing girls in impresario V.A. Vandevere’s circus extravaganza Dreamland – the giant bubbles twirl in the air, gradually twisting into enormous animals (presumably this is referencing the 1941 animated film where Dumbo gets drunk and sees pink elephants).

Sadly the rest of the film doesn’t live up to the star of the show. In fact we don’t get that much show really, which is a missed opportunity. There’s an awful lot of staring up into the Big Top rafters, as circus stars and audience members hold their breath to see whether the little elephant with the enormous ears will take flight. And I felt a bit like that myself, waiting on tenterhooks for the film to exhibit as much get up and go as its little star.

Even when Vandevere (Michael Keaton) first sets eyes on this extraordinary creature in Max’s circus they don’t actually get Dumbo to fly. That should be the first requirement of a cartoon villain desperate for innovative circus acts!

Vandevere is a cartoon villain, though a well-judged one in what is a family film. His wickedness is usually covered by a thin sheen of civility, and he’s the most fun apart from Dumbo himself. Unfortunately Max loses all his bumptiousness when he realises Vandevere’s intentions, which is a shame as a DeVito–Keaton face-off really would be something to relish. (Also rather a hoot is Vandevere’s banker, J Griffin Remington, played by Alan Arkin, who has no compassion but also no loyalties.)

Dumbo’s skill is discovered by two children who are also motherless: the scientifically-minded Milly (Nico Parker) and her younger brother Joe (Finlay Hobbins). Their father, stunt rider Holt Farrier (Colin Farrell), has just returned from WW1 minus one arm. He’s coming home to a broken family, his wife having died in the flu epidemic which raced through the circus.

Holt wants to get back to his own circus act despite his injury, but in his absence Max has sold most of the family’s furniture and all of Holt’s horses. He’s reduced to training several brightly dyed dogs, while at the same time trying to find his place once more in his old life. (Farrell is fine but has little to do.)

Vandevere later calls Max’s showmen and women a “little band of low rent freaks”. Such is the nature of this shoestring operation, left behind by developments in design and presentation, that every one of them wears several hats, though only Max wears the ringmaster’s.

What’s always interesting in circuses is the tension between skill and fakery. Ironically Dumbo is the most real, yet is accused of being a fake as soon as his ears are revealed in the ring.

The strongman (Deobia Oparei) pretends to lift empty weights, though he’s genuinely strong. Pramesh Singh (Roshan Seth), the snake charmer, is happy to scare locals with his very real pythons when they taunt him with accusations that he’s a fraud. Max even has a dummy arm made for Holt, lest he scare the audience with an actual war injury.

Dumbo’s flying is always a bit hit and miss, and an attempt at a firemen tableaux with the little elephant extinguishing flames high above the circus ring does not go to plan.

But news of flying elephants travels fast and it isn’t long before fellow circus owner Vandevere, in a stripy suit that screams cad, turns up with French trapeze artist Colette Marchant (Eva Green). (“I’m one of many gems he wears to reflect the light back onto him” says the self-aware Colette of Vandevere.) He makes Max an offer he can’t refuse, and Max and his circus join Vandevere’s own Dreamland circus.

Dreamland, with its giant glowing skull and oversize rides, a futuristic control pod sitting atop a pillar high in the sky, makes Max’s endeavours look like a flea circus.

It’s a triumph that relies on both mechanical technology and human credulity; and it does fake futurism brilliantly. Its science tent includes a fabulous display of what future modernity meant to people in the past. Deliberately way more modern than it should be, it still encapsulates the way we used to think of technological progress, making our lives easier in fun and fantastical ways rather than making us redundant. One tableau has a man in a dress pouring coffee from pot, while a woman in a suit sits at the kitchen table, an automated hair wand and hairdryer working their magic on her. It’s witty and intelligent and I could have done with more of this.

The movie picks up considerably during the last half hour. It’s genuinely exciting as Holt, his children and the rest of Maximilian’s circus try to rescue Dumbo and his mum from the futuristic Dreamland, which can still only ever be a prison for wild animals.

It’s not enough though, after the rather dull first hour and 15 minutes. Dumbo feels underwhelming. There isn’t enough spectacle to entice children, and the interesting ideas are all too briefly realised.