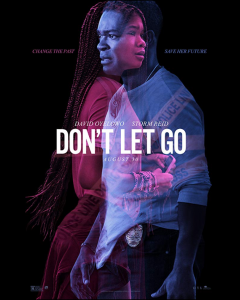 I’m sure most of us would like to alter our past to improve on our present. If I could, you’d be reading this in The Guardian, a paper that would no longer, once I’d gone back far enough with my red pen, be susceptible to typos.

That’s assuming it all went to plan and my little timey-wimey tweak didn’t somehow mean we ended up with no Guardian, and me writing for the Daily Mail. Argh! But what if changing the past meant that the Daily Mail was actually the paper beloved of the nation’s leftists, and with a penchant for typos? The Doily Mole maybe.

I’m exhausted just thinking about it, though secretly hyperventilating over the typo thing.

Don’t Let Go is a timeline-tampering thriller, but if you were hoping for a mind-bending caper you’ll be disappointed. It’s not awful, but for most of its runtime it isn’t that thrilling, and its spot-the-dodgy-cop routine at showdown time is tedious.

In its favour, the performances are terrific – Storm Reid makes a resilient, thoughtful heroine, a believably resourceful teen rather than a superhero; and David Oyelowo is excellent as detective Jack Radcliff, his increasing desperation mingling with grief and terror, pushing him to the edge.

Jack (Oyelowo) has to work with his niece Ashley (Reid) to prevent her murder – the twist being that in the present, where Jack is, she is already dead. Her calls to him, which start a few days after her death, come from a few days before the killings, and Jack has three days to save Ashley and her parents.

She’s had to grow up quickly because her parents are so inadequate. Her dad Garrett is an ex-drug addict with mental health issues and some dodgy people in his past. Her mum works, and apparently argues with Garrett, though we find out little else.

Jack has no personal life to speak of, which at least means when the timelines keep changing there’s less chance of spilling out into other people’s pasts. It keeps the film relatively tight and reinforces his isolation and his grief (after the deaths he seems to physically age, his eyes reflecting his pain and confusion). But it does mean that without those typical connections it’s harder to empathise with him.

Ashley too is never seen with friends. When the film opens she’s waiting outside a cinema for a lift home, but her parents have forgotten about her and she has to call her Uncle Jack, on a phone he gave her for situations like this. He’s furious with Garrett for letting Ashley down once again, and later gives his brother a piece of his mind.

When Jack finds the bodies at their house, all three have been shot. Ashley has been dumped in the bath, her blood dripping down the white tiles.

Garrett (Bryan Tyree Henry) is the initial suspect in what is believed to be a murder-suicide, though Jack, who discovered the bodies, is also pulled in. Internal Affairs pick at him with ludicrous scenarios and spurious motives to get him to confess. (The woman detective next to Jack’s accuser shows her exasperation with her colleague with just the merest head and eye movements. She never says a word.)

Ashley’s calls to him after her own murder are initially terrifying for him. His sense of disbelief as he sits watching his phone ringing, her picture and name flashed up, while her own disconnected mobile sits next to him, is enjoyably unnerving. Though the tests he sets her, getting her to leave him messages from the past while hiding her own future from her, are run of the mill.

Timeline-changing movies are interesting precisely because of what happens when characters forget their actions affect others in myriad ways, or think they can control these effects. Hubris is a film staple but especially when dabbling in time itself. And although Jack soon learns this, the ripples stop pretty quickly.

Having two isolated main characters adds to a sense of claustrophobia, the walls closing in, like the inevitability of what will happen to Ashley and her family if she doesn’t stop it – but it also makes it harder to care.

The phone calls from Ashley are quite awkwardly written at first (“hope you just don’t die” she says to her uncle when he can’t hear her properly on an early across-time call) though they become more natural as the story gets into its stride.

I did like the shot from a distance as Jack and other relatives walk away from the family’s graves. The cemetery is huge, with widely spaced gravestones, the grass pale and dried out. The black-clad attendees look like ants. It shows how small we are in the grand scheme of time and space, and contrasts nicely with the camera’s later focus on Jack’s face as he tries to unravel a crime before it takes place.

While Don’t Let Go isn’t a particularly original idea, it did remind me of Out Of Blue, Carol Morley’s time jump film from earlier this year.That film didn’t entirely work, though it was a very honourable failure. Unfortunately Don’t Let Go doesn’t have the gumption to go down so many rabbit holes.

It’s easy to work out whom Jack is actually up against in the police department. There’s little tension until the end, by which time I didn’t really care who survived, just how they might tie up the stories in the different timelines. It’s both po-faced and daft, but not enjoyably so – and the last ten minutes are silly.

Much is kept from us. We never know how Ashley is calling Jack. The film ends abruptly and we don’t know who, going forward, will know or remember what happened. This tactic may be, again, meant to reinforce that isolation, or simply to limit loose ends, but because the film feels so dispiriting it just adds to the sense of a story floating in space with no connection anywhere and no real reason to exist. It’s all rather half-hearted.