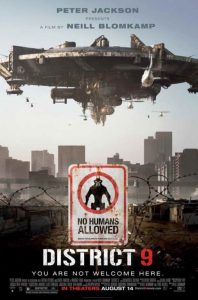 “He became the most valuable business artefact on earth… but his real value was that he could operate alien weaponry,”  says Grey Bradnam, a journalist speaking long after the events of District 9.

He’s discussing Wikus van de Merwe (Sharlto Copley), a desk-bound penpusher put in charge of clearing District 9, a shack-filled shanty town housing a million aliens, and who after an accident starts his metamorphosis into one of the very creatures he mocks and dismisses.

With captured alien guns useless as they are only operable with alien DNA, Wikus’s gradual transformation makes him both less of a person (literally and figuratively in the eyes of the authorities), and the hottest of properties.

Escaping his human captors, to find his cure Wikus has to team up with the very alien he previously happily tormented, while sources put out false stories about his “prolonged sexual activity in District 9” in an effort to stop anyone hiding him.

There are strains of The Fly remake here, as his painful transformation begins and the tortuous internal fight between human ways and alien ways takes hold. But The Fly was more a tale of hubris while this feels like karma (not that I believe in either. There I said it, now wait for me to turn into a bluebottle and start eating catfood).

Part found footage (or maybe just footage), part mockumentary, part satire and part straight up sci fi action flick, District 9 is sometimes all these at once so think of it as a Venn diagram with the crazy last few minutes in the middle bit.

20 years earlier, a huge spaceship appears over Johannesburg, to the surprise of those who expected first contact with an alien species to be above a rather more important city. After hanging there for three months the authorities break in to find a dripping, burning ship full of malnourished, huddled creatures.

Humans are contradictory. Infinitely adaptable, the Joburg citizenry quickly get used to a giant spaceship hanging above their city, working and living directly underneath it. But we also dislike change and happily fall back into our existing xenophobia after that first burst of virtue-signalling assistance.

The aliens are transported to camps where that initial outpouring of sympathy and food donations is soon replaced with shack-like housing in District 9, followed by several years of downward spiralling relations. Its a well-trodden path, with restrictions leading to poor behaviour which is then used as evidence of why restrictions are necessary. There is cross-species prostitution, and tensions with locals lead to riots: “if they were from another country we would understand but they’re not even from the planet at all!” says one. Black and white are fed up with The Prawn, the derogatory, amorphous term used for the million alien visitors.

The aliens actually look less like prawns and more like a cross between a grasshopper and Predator. To the humans’ disgust they scavenge, fight, and eat tinned catfood which they buy at a huge mark-up from Nigerian gangs living nearby; and to the humans’ envy they are sophisticated enough to have a spaceship that can cross galaxies.

Christopher Johnson (Jason Cope) is the only alien named in the film. A technological expert, he’s searching for a lost liquid that can get their spaceship back to their home planet so he can bring back help. During the clearance Wikus is sprayed by it – within a few hours it has transformed one of his arms into an alien claw, and Wikus himself into a wanted man.

Wikus is jovial, gauche, and unthinkingly horrible (the clearing of District 9 is brutal with Wikus enjoying torching pods containing gestating young – laughing as they burst “like popcorn”). He would also be unpromotable were he not the son-in-law of the company boss, and frankly stupid enough to be useful.

Initially a racist (species-ist?) opportunist, Wikus continues in this vein, only showing bravery when it helps himself, until he finally achieves a kind of genuine, if slightly gormless, redemption. “I always thought the Prawn were intelligent” he lies, when it turns out they can help him change back, even though he has known about their language and technology for 20 years.

As Wikus and Christopher form an uneasy alliance to help each other, there’s a disruptive jump as District 9 goes from uneasy satire to straight action, though there are still moments of silent sadness during the firefights; Christopher’s discovery of tortured alien bodies is devastating. The story moves from the rubbish-strewn District 9 to the laboratories, and the CGI aliens look so good I wondered if they’d put all the stunt performers in corsets to give them teeny tiny waists before dressing them up (though I can’t see why Wikus’s arm would fully transform on its own, were it not for the purposes of this plot.)

With its South African setting this is obviously about Apartheid and the rules and beliefs that kept it in place, though it’s never spoken about. There are also echoes of the treatment of Jews in World War Two, with paperwork – which can both limit freedoms and paradoxically make victims feel safer – to be completed by the aliens before they are moved (“so you’ve got a little one, do you have a licence for that little one?” Wikus asks Christopher, about his small son).

District 9 also raises questions about non-human species, in the same vein as Bong Joon-ho’s superpig fable Okja. How many times did I type something about “removing the aliens’ humanity” before remembering they aren’t in fact human? We’ve known for a long time that pigs are intelligent and emotionally sophisticated and dogs are apparently as bright as toddlers too. It’s clear that Humanity isn’t a special enclosure outside which we can treat all other creatures however we like, while still praising ourselves for our “humanity”.