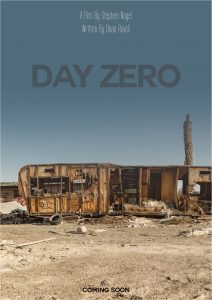 Stephen Nagel’s short film, Day Zero, was made with zero budget – achieved by shooting on mobile phones, pulling in actor friends to perform, and borrowing props wherever he could.

That kind of filmmaking situation is something I bear in mind when reviewing a micro or zero budget film, though ultimately, whatever its cost, it needs to deliver something to the viewer. Nagel’s film (it comes in at 16 minutes) is both entertaining and intriguing, with an impressive performance from Megan Alexander.

(Its teaser trailer – at the bottom of the page – is very well done. Interestingly rather than focus on snippets from the film, it tells us more about society’s collapse, highlighting the mayhem and boredom that results and setting the scene for the film. If you get the chance to see the film, watch the trailer just before if you can.)

Set ten years after “Day fucking Zero” – the day Cape Town began its tumble into lawlessness amid a horrendous and on-going drought – three people, Maggie (Nicola Duddy), Ash (Megan Alexander) and Shaun (Brad Roman), are trekking through the parched countryside towards a semi-mythical spot where they can be safe.

It’s one of the few places that hasn’t been taken over by thugs or requisitioned by the authorities (what’s left of them, anyway).

There’s an acceptance of what has happened to society as the trio reminisce over that day a decade ago; amongst the violence they face every day they almost laugh over the violence that they remember from back then.

It’s dryly (sorry) funny too: “Do you guys remember when your piss wasn’t green?” asks Ash with matter-of-fact directness after peeing on the ground, earning Shaun’s rejoinder “I’ve got a question. How do you piss so much during a drought.”

But pursuing them is vicious scythe-wielding Nico (Caelan Curry), clad in silver horror mask and black hooded cloak. He’s a looming presence even when he’s not there: part trying to scare them, part following them in order to find safety, and part wanting, in some way, to belong.

It seems that for Nico the apocalypse has been an opportunity; he doesn’t appear to have been much beforehand but can now attack almost with impunity.

The music works particularly well, especially with the news report voiceovers at the beginning. I loved Nagel’s use of colour (he’s also the cinematographer), from the very first scene with the greys and browns of the rocks and the brush, with touches of orange here and there.

Most of the flashbacks are in black and white, with most of the present day scenes are in colour. But sometimes Nagel swaps them around, keeps us on our toes just like the characters, as we try to work out where we are.

There are aspects that don’t quite work. The tension has a tendency to dissipate (though I’ve noticed with very low budget filmmaking that tension is often the hardest thing to get right).

But the long-standing friendship between Ash and Maggie feels very real; they have an acceptance that everything has changed and there’s only one way forward, but would still do anything for each other.

Nagel also directed one of the best segments in the fascinating collaborative indie film Breathe Easy, where directors around the world filmed short segments about different groups of people, in different countries, responding to an apocalyptic event (both Day Zero and their Breathe Easy story were written by Dean Ravell). Check out my interview with Stephen Nagel about Breathe Easy and my review of the film.

Watch the trailer for Day Zero: