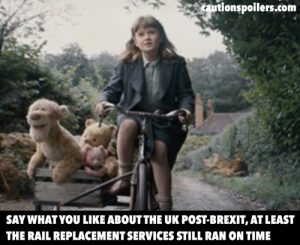 This is a film that yearns for a golden bygone age. “You can’t just keep saying hello to people!” says Christopher Robin to Pooh as they rush past harried Londoners.

A time when bosses utilised our goodwill, demanding more and more, expecting us to work all hours so we never saw our families.

Hmm, not that either.

Marc Forster’s latest film would be a good choice on a rainy afternoon when the family is in the living room, arguing, and perhaps there’s a Tory relative sitting in the comfiest chair who needs shaking out of his nostalgic complacency.

I’m not a natural Winnie the Pooh fan. I find ageless furry animals speaking in humanese extremely unnerving, and I’ve only just recovered from Paddington cleaning windows using his bottom as a chamois leather.

But I enjoyed Christopher Robin immensely. At times it’s trite and twee, with even my 9 year old whispering “this is so cheesy!” during those not remotely unexpected closing scenes. But it’s also surprisingly brittle – there’s a realism knitted into the twinsets and tweed.

We like to hark back in films set in postwar Britain as a sort of comfort blanket, and I suppose they are, if you’re Boris Johnson.

The streets are tidy, and there’s always parking outside the expensive white Georgian terraces. The cheery lower orders know their place. Everyone under 50 is thin yet tough, having survived WW2 on dried eggs, homegrown tomatoes and a can-do attitude.

Christopher Robin (Ewan McGregor), his wife Evelyn and daughter Madeline do indeed live in a Georgian townhouse, and their weekend cottage reminds me of the Dashwood ladies in Sense And Sensibility downsizing to a giant rectory with only two servants.

But this about a man who has entirely lost touch with what it means to be a child, living in the now; in part because his own childhood ended so abruptly (first being sent away to boarding school, then soon after, his father dying).

And it’s surprisingly gritty in its depiction of family life that was not, even for the upper middle classes, the picture of warm perfection we see so often. Long hours and putting one’s job before one’s children are not new, nor the thought that overworking now for some blissful family future of picnics and Christmases round the fire makes it worth it.

Employment was often insecure; the NHS had yet to be created. Christopher now works in the Efficiency Department (the Fish In The Sea Department as Pooh calls it) for high end luggage company Winslow Luggage. He points out to his boss, who’s demanding 20% cuts, that their employees were promised secure jobs on their return from the war.

Christopher Robin (Robin is his surname) has come back from WW2 to meet the daughter he has never seen. Like many middle class women, after working through the war in “men’s jobs”, Evelyn (Hayley Attwell, a study in warm mothering and chilly anger) now finds herself a housewife.

The war wasn’t the first time her husband had been sent away. The scene when his mother and father drop him off at boarding school, not even waiting until he’s gone inside before driving away, is heartbreaking.

It’s a path of life Christopher Robin accepts. But with his boss wanting the cuts planned out by Monday, he has to stay and work while Evelyn and Maddie (Bronte Carmichael) head to the cottage without him. It’s while sitting in the garden square (non-Brits, living in a grand London square you get a key for the shared garden, semi-mythical places of peace and tranquility away from the great unwashed) when who should appear from a door in a tree but Pooh (Jim Cummings), his childhood friend.

Christopher may be delighted to see him but he’s also rather put out. Another weekend would have been so much better, surely?

Even once he’s back in the Hundred Acre Wood (deliciously magical and drenched in mist) as soon as he’s reunited Pooh with Tigger, Eeyore, Piglet, Kanga and the rest of his missing friends he’s desperate to rush back to London for his meeting, trying in vain to hide from his wife and daughter as he creeps past the cottage.

Christopher Robin has a lot to recommend it. The animals are well-realised, though I’ll admit to championing old misery-guts Eeyore. What can I say, every time he appeared I started humming under my breath “hello darkness my old friend…” He always has the last word and it’s usually a bleakly funny one. If anyone could be the new darling of indie cinema it’s Eeyore, so someone please give him his own film.

Pooh has passive aggression down to a fine art. His old friend Christopher has hardly thought of them in years: “we think about you every day” retaliates the bear, mournfully.

The 1940s settings are beautifully done. I loved the stations and the trains – always busy and bustling, yet with enough carriages for one per person.

Christopher Robin is and isn’t a children’s film. The early scenes of family angst were, unsurprisingly, lost on my 6 year old. (He’s also not a good enough reader to understand the text on the animated original drawings. So if you’re watching this on the big screen and a parent or older sibling is reading them out, no ssshhh-ing.)

Once the animals appeared, my boys loved it, with Tigger a particular favourite. And my youngest thought Eyeore’s stoic approach to his doom, drifting along a stream towards a waterfall, was hilarious – especially when Christopher Robin jumped in to discover the water was a few inches deep and the hapless donkey merely approaching a tiny weir.

The return to London – Maddie running away to the capital with the animals, her mother in pursuit, and Christopher Robin finding a solution to the cuts that helps both company and employees – is firmly in family film territory.

McGregor makes the most of an alternately brittle and gooey script. He’s rather good as a man who may claim to want more family time but because of his upbringing finds the arms-length friendship of colleagues less work. (Though I was often distracted by his extraordinarily perfect teeth, which don’t look like they’ve ever been near a pot of enamel-destroying honey.)

“Doing nothing leads to the very best of something” says Pooh. So take time out, play pooh sticks under a bridge with your loved ones, and hopefully the mortgage will pay itself.