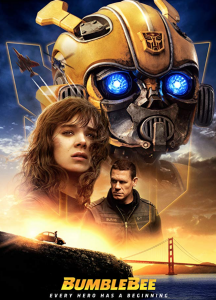 He wasn’t always Bumblebee. (I’m assuming he’s a he.) Back on Cybertron he was known as B:127 (coincidentally also the name of my 127th and final child).

There he fought alongside Optimus Prime and the Autobot Resistance in the civil war; but with that war about to be lost to the Decepticons, Optimus Prime sent him to Earth for safety and to establish a base.

(You probably all know this – I’ve never seen a Transformers movie before, having been too busy trying to extricate the Transformers toys my children adore from their ridiculous packaging. But this is a great film so the others are too, right? Right?)

It’s 18 year old Charlie Watson (Hailee Steinfeld) who finds Bumblebee in a scrapyard in the form of a bright yellow VW Beetle (this movie could have so easily have been called HeBee Goes Bananas). She’s an amateur mechanic, desperate for her own set of wheels, and Uncle Hank, the yard’s owner, decides to give her the knackered old car as it’s her birthday.

Bumblebee is set in the 1980s, and the production design is terrific. It’s so easy to fill a film with on-period tropes as if we all spent each decade wearing and living only in designs that signal that time. (Now you can change your look weekly, but when I was growing up if your mum bought you a hideous orange corduroy pinafore in 1978 you were going to be wearing it until 1984 – and then your poor sister would get it, even if by then she was 35.)

In Bumblebee it is definably the 80s, but not in a retro-museum way.

Charlie has posters of The Pretenders on her wall and The Smiths near-permanently playing, but her bed is likeably messy rather than one of those metal tubular ones with a red, grey and black zigzag duvet cover that were all the rage back then for people with cash. (Please note my bitterness.)

Even the denouement is reliably old school. We didn’t have world-destroying tech at our fingertips then, well not unless you were the American president or the general secretary of the Politburo and had access to a Big Red Button. Instead there’s a mad dash to a telecoms tower and a climb to disconnect something important.

This is a blockbuster movie about autobots and robots that feels anything but auto or robotic, and also not really like a blockbuster. The relationship between Charlie and what is basically a heap of metal is real and solid. I cried during Bumblebee, and not because they only had one Duran Duran song on the soundtrack. (It was the best Duran Duran song – Save A Prayer.)

And its themes – of a family that’s fallen into unhelpful patterns, and a teenage girl mourning her dad – seem local and understandable to everyone. It’s less about Charlie having to escape and more about her having to somehow find her own way home.

Charlie’s family aren’t awful. Her stepdad Ron (Stephen Schneider) isn’t a monster, her little brother Otis (Jason Drucker) is annoying but no more annoying than many little brothers. Her mum Sally (Pamela Adlon) loves her, distractedly. They’ve just swerved slighting off the main track, Charlie going one way and the rest of her family going another, the manifestations of her grief seen as the usual teenage stuff.

Ron is initially clueless though, trying to be a father without putting the work in. For her birthday he gives her a book on positive thinking that recommends smiling more; unsurprisingly her reaction is one of glowering annoyance, though as Charlie’s friendships with Bumblebee and Memo grow her smile gets wider and wider.

Bumblebee’s arrival on Earth sees him crashing (literally) into a Sector Seven training course in the forest, before he’s chased to an old mine by Agent Burns (John Cena) and lots of firepower.

Attacked by Decepticons sent from Cybertron to destroy him, Bumblebee is thrown off a cliff and his voice box destroyed. Despite it only being a few minutes into the movie, and Bumblebee being a giant lump of yellow metal, I don’t mind admitting that rust-causing tears started welling up.

Pretty impressive, no? Creating such empathy so quickly for scrap metal. It helps that we’ve seen Bumblebee next to other Transformers and he’s the small, cute one, acting a bit like a bouncy, inexperienced teen.

One of the recent joys of viewing American films is the derth of Brexit allegories, though of course they’re increasingly filled with Trump ones instead. And there is one here, as saucer-eyed American military top brass decide to cast away their senses and their security measures, when two giant Decepticons arrive on Earth and convince them that Bumblebee is a traitor and must be caught.

The Americans think they’re beating the Decepticons at their own game, that once Bumblebee is dealt with they can do what they want with his captors. But soon their technology and systems are compromised. It’s Trump and Putin, the American president seemingly in thrall to his more strategically nimble Russian counterpart. They are useful idiots in a bigger game, or a bigger war. (I did like the news that the Decepticons, accessing America’s security systems, were making a “connected web of information”; it turns out we couldn’t even invent the world wide web ourselves.)

Agent Burns is a rather ambiguous character. Too clever to believe the Decepticons, too lacking in foresight to really support Bumblebee, it’s a rather odd characterisation – though he looks perfect for the role of 80s military man with his cleanly chiselled jaw line and square haircut.

Lendeborg has tremendous chemistry with Steinfeld – Memo and Charlie’s growing friendship is honest and realistic. It’s the excellent Steinfeld though who is the heart of this film, friendly but with firm boundaries, curious but home-loving, intrinsically good-hearted yet determined and brave.

It’s Charlie’s personality and warmth which drive her immediate connection with Bumblebee in her garage after her beloved car suddenly unfolds into a huge yellow robot, learning to communicate with him even though he can’t speak. Bumblebee too is innovative in his desire to talk back (a rather sweet allegory for her problems with her family which doesn’t come across as at all heavy-handed).

As a character, Bumblebee is adorable and funny. The requisite accidental house-trashing is great fun, as he accidentally charges himself by putting his hand in the electric socket, particularly impressive as when I’m in the US I can barely get a kettle to boil.

And when Charlie tries to teach him to hide on the beach, expecting him to transform when danger approaches, Bumblebee simply sits with his head in his hands, like a child who think if he can’t see you, you can’t see him.

Ultimately though she’s like his parent, and sometimes the best thing you can do for your charge is to let them go.