You are here: Home / Film Reviews / Blink Of An Eye 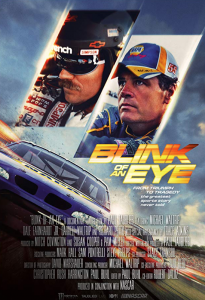 Racing driver Michael Waltrip has an extraordinary story: a run of 462 motor races without a win, followed by a huge victory in a race which also saw the death of his friend and mentor, the legendary driver Dale Earnhardt.

Paul Taublieb’s documentary is based on Waltrip’s autobiography of the same name, and is mostly from Michael’s point of view. Though he’s an engaging interviewee, he doesn’t seem to have come to terms with what happened, so it feels like we only scratch the surface of Michael’s losing streak, and the aftermath of the accident.

I enjoyed Blink of An Eye, but I came away wanting more information from the peripheral players and more piercing reflection.

Growing up in the shadow of his brother Darrell, 16 years older and a successful racing driver, it was unsurprising when Michael followed his older sibling into the same sport.

Home movie footage from his childhood has that washed-out glow that suggests endless sunny days where boys whizz around racing each other on their bikes. He’s happy talking about those days, before the losing streak and then that first win which he couldn’t even celebrate.

His parents followed Darrell around as he started his career, always able to find money for his passion. They’d drive through the night to get him to the Daytona qualifying races, but by the time Michael wanted to start racing there was no money available. Darrell wouldn’t even help; it fell to their other brother Bobby to lend Michael his go-kart.

Starting out Michael was very successful – before 1984 he won everything. Handsome with his dark curly hair, and always smiling, he looks like the kind of thrill-seeking young hero we always love. Yet when he moved into Winston Cup races he failed to build on his earlier successes, and the losses mounted up.

Watching the brightly-painted cars racing round the track, they look like jewel-coloured bees moving as a swarm while one then another takes the lead position. There’s a compelling beauty about them even as the background music suddenly changes to the ear-splitting noise of the engines powering them round the bends. Meanwhile a ticker on screen races up through the numbers to signify Michael’s win-less races.

Dale Earnhardt owned his own teams and was moving all his drivers into the Winston Cup when he decided to take a chance on Michael. Like most outlier sports champions, even briefly sketched he’s fascinating: intense on the track (he was known as The Intimidator), off it he seems to have been friendly and open. Unlike most drivers he favoured an open-face helmet because he wanted to feel the wind as he was up close to another driver. He certainly bonded with the cheery and much younger Michael, to his son Dale Jnr’s surprise.

It was at the Daytona 500 in February 2001, with Dale Snr holding off the other drivers so Michael could win, that he was killed. Even now, nearly two decades on, Waltrip and other talking heads are reduced to tears talking about that day and what led up to it.

Blink Of An Eye is well structured and well-paced (it should be considering its subject matter!). A knowledge of the disciplines and races is assumed, though I have no idea whether the average racing fan in the US or elsewhere would know the difference between the Dash Series and the Winston Cup, for example. (To be clear, I’m in the UK but was sent this film to review for its American release, though presumably they’re also eyeing up overseas markets at some point.)

Persevere past the opening scenes – Michael driving and looking sad while a country music DJ on the radio talks about that day in 2001 – which feel and look contrived. The rest of the film is considerably better, and often moving, as Michael tries to make sense of what happened beyond the narrative he’s used to delivering.

Many of the interviewees are his friends, though the three most memorable (and interesting) are sharper and refreshingly open. His ex-wife Buffy talks a little about the stress she was under during his losing streak. It would have been fascinating to hear more from her about living with Michael during this time, and what she was faced with, compared to his friends who saw the happy-go-lucky Michael we see smiling with Dale in the older man’s yacht.

Dale’s son Dale Jnr, who was also driving that day, is open about his desire to win the race even as his father was strategising that they work as a team so Michael would win.

Brooke Hondros, the publicist at Dale Earnhardt Inc when Michael was taken on as a driver, is pure documentary gold. She’s clear that she was not impressed with having to promote someone whose poor results were well known. “it was 0 and it was 462. And it was talked about. Regularly.” She found him defensive. She’s also clear about how everyone was waiting to see how he’d perform now he no longer had the usual excuses to hide behind: “Now he had everything he needed what was he going to do with it and that’s what everybody was waiting around to see.”

Darrell too is honest now about his own attitude to his little brother when Michael was just starting out: “when it was convenient I helped him” he admits.

These much-needed insights, from people with neither an axe to grind nor a need to sugarcoat their memories, cut through Michael’s own struggles over how to frame what happened, to himself as much as to anyone else.

Michael still doesn’t seem to have completely processed Dale’s death and the events around them, and he comes across as unsure what happened to his career after that successful start. Was it because he wasn’t taking his career seriously? Was he, at that stage, out of his depth? (His new race success continued after Dale’s death.)

He hasn’t been to therapy and he’s fatalistic that we die when we’re supposed to. I wonder if that attitude is as a result of Dale’s death, or if it comes from working in a sport that was, until that crash forced more safety developments, more dangerous; or even if someone fatalistic might actually be drawn to a dangerous sport.

Find out where Blink Of An Eye is showing in the US.

Read my review of Rapid Response, about safety in US racing driving.