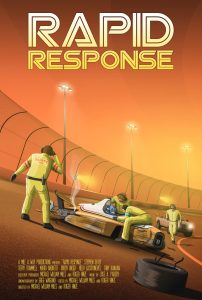 In a film stuffed with “what?!” moments, medic and lifelong motor racing fan Dr Stephen Olvey’s comment really brings home the fragility of life for drivers and the risks they took. (The film is based on Olvey’s book Rapid Response: My Inside Story As A Motor Racing Life-Saver.)

Back in the 1950s, one in seven drivers were killed each year in the US across the major motor racing disciplines. It’s a shocking statistic, but it took Olvey and his gradually expanding team of doctors and safety providers years to be able to introduce all the safety measures now taken for granted; and many of their changes came about as a direct response to specific horrific accidents on the track.

This is a sobering and fascinating film about what it took to maximise safety in motor racing: in medical personnel, on-site equipment, trackside treatment, and even evacuation procedures. It also raises questions about using crash footage: people died or were seriously injured in them, though they also instantly convey why specific safety measures were necessary.

There are many crashes in Rapid Response, and their effect can become dulled; though it’s also hard to escape the fact that seeing cars’ obvious weak points perfectly illustrates why Olvey’s changes were so desperately needed. (It also helps us understand the exhilaration as well as the fear.)

Olvey attended his first speedway race as a child in 1955; a fixture which saw the death of his favourite driver, Bill Vucovich. And there’s a sense of mesmerising dread for us, watching grainy, washed-out footage of men weaving around racing tracks at high speeds, in what amounted to fragile bomb casings. Cars literally fall apart at speed. They break up on impact, spin across the track, or crumple against barriers. Competitors coming up behind try desperately to weave their way through.

Some of the footage is from 60 years ago, and these older accidents particularly still pack an emotional punch, as photos of the men who lost their lives appear on screen. We see fireballs and concertinaed metal in which men died. Other accidents are more recent; safety is always a work in progress.

Watching footage, and listening to retired drivers like three-time Indy 500 winner Bobby Unser, old-style racing looks like a sporting Wild West, run on a mixture of gasoline and adrenaline.

The risks in those days were astonishing, but as Olvey says, safety was an afterthought. With no paramedics at the trackside, drivers would stop to drag injured fellow racers out of their burning cars. Unser once put out his own car fire. One track had as its makeshift race-day ambulance a hearse lent by a local funeral home.

This story of racetrack safety and medical care is told in a linear fashion; it has to be, as safety was improved little by little, nearly always in response to something terrible happening on the track. A crash, leading to deaths or serious injuries, would lead to a new protocol or rule, over and over again as dangerous practises were outlawed.

Luckily once they got going, change could be quick; Olvey’s group was nimble on its feet. As safety improved, the new rules started to spread to other tracks around the country, which previously had little or no medical presence during practice and races.

Like many medics who got involved, Olvey (who wanted to be a racing driver, but after a chat with his dad went to medical school instead) started off responding to a request for volunteers to help out on practice and race days.

He quickly met Dr Tom Hanna, who was already giving medical assistance at the track – Hanna introduced checks for drivers before races, and founded the first ever US medical centre at a race track. With Hanna working in his own medical practice during the week, it fell to Olvey to attend the track on practice days midweek.

Seeing injuries that could have been treated at the trackside, and witnessing deaths that might have been preventable, led Olvey to develop a safety and medical system at Indianapolis that’s still going today.

Like racing, safety at motor races was and is a team effort, with communication key. As word spread, Olvey was joined by paramedics and doctors who each had a specialism they could contribute. Key to the group was Dr Terry Trammell, an orthopaedic surgeon, who worked closely with Olvey going forward: he treated the bones and Olvey treated head injuries.

Rapid Response is horrifying but also absorbing, even for a racing novice like me (before watching Rapid Response I thought the Indy in Indy 500 stood for Independent).

The talking heads are balanced with track footage, and there’s useful historical context – I enjoyed the nonchalance of spectators, with sunny film of cheerful (and often tipsy!) racegoers in the 60s and 70s; people stand around in shorts and bikinis in the central grassed area in the middle of the track.

I wasn’t always sure where we were up to, and the sector terms and acronyms, the different organisations and detail, can be confusing. At an hour and 40 minutes Rapid Response also feels repetitive and overlong, unless you’re a big racing fan or a medic interested in sport safety.

Still, Olvey and Trammell are modest and thoughtful communicators – one can only imagine how many people are alive today because of them. And retired racing drivers like Al Unser, Bobby Unser and Mario Andretti are informed and entertaining about a sport that’s been forced to become safer but can never be entirely risk-free.

Read my review of Blink Of An Eye, about Michael Waltrip’s Daytona 500 win the day his mentor and friend Dale Earnhardt Snr died.

Watch the Rapid Response trailer and scroll down for images from the film: