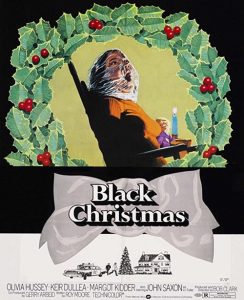 It’s nearly the end of term and the sorority students are finishing up with school and getting ready to head home for the holidays; though not everyone has a warm family to go back to. The brittle, heavy drinking Barb (Margot Kidder) is having difficult phone calls with her mother in the hall, in full hearing of everyone else.

But none of the young women of the sorority house have any idea that a strange man has broken into their house and is hiding in the attic.

I’m not a huge connoisseur of slasher films. They’re terrifying and I struggle to see past the women being killed to the allegory behind. Still, I felt if I was going to venture into slasher territory, you might as well go for one of the best of the genre, and certainly one of the best festive horrors.

Black Christmas was a trailblazer in many ways when it came out in 1974, using “the caller is in the house!” before it was even a horror trope. Its influence is such that it was even remade in 2006, with director Bob Clark as producer.

Its horrors are as much psychological as gory – we know he’s in their home, their all-women refuge. Sometimes it’s shot from his point of view: on the upstairs landing, looking over the darkened banister at one of the young women on the phone in the hall; or through thick plastic hanging between him and his next victim.

He clearly wants them to do his bidding; during one of his obscene phonecalls all of them crowd round the phone giving him a full audience as Barb tackles him. After killing one of the women he places her body in a rocking chair in the attic with a baby doll.

But while he’s a deranged murderer, calling them and moaning obscenities down the phone at them in all kinds of different voices, he’s just one of many men in the movie who want to control women.

Peter (Keir Dullea), the boyfriend of Jess (Olivia Hussey), is enraged when she tells him that she’s pregnant and wants an abortion (his anger seems to be as much about the fact that she doesn’t ask his permission); and furious who she tells him she won’t marry him and put aside her dreams and goals just because he’s changed his own career plans.

Mr Harrison (James Edmond), the father of Clare (Lynne Griffin), the first young woman in the sorority to disappear, is over-protective and controlling; when he comes looking for his daughter at the house he makes it clear to Mrs Mac (Marian Waldman), the sorority House Mother, that he doesn’t approve of the women in her care drinking and seeing boyfriends.

The police often don’t take them seriously when they report their friend missing, considering the phone calls to be from a boyfriend playing a joke. When officers do start tracking the calls they berate Jess for not keeping him on the line for long enough.

The time of year and the women’s individual circumstances mean often no one is sure where anyone is, or should be. Clare disappears after going upstairs to pack for the holidays. Barb’s heavy drinking means she is often too befuddled to know who is where; Phyl (Andrea Martin) is taking medicines for a cold; Jess is dealing with her unwanted pregnancy and her troubling and troublesome boyfriend.

There are more deranged calls, all unsettling, with a woman’s screams audible and whispered talk of people called Billy and Agnes. One by one the young women, and their house mother, are dispatched (poor Mrs Mac suffers a very literal “hook up”) with some bodies found and some still missing.

Once the police are taking the disappearances seriously, the film moves towards its denouement. The creaky technology cranks the tension as an officer runs around the telephone exchange, dodging ladders in his way, desperate to find out where the calls are coming from before the caller rings off.

Black Christmas is creepy and unnerving, though nowadays not particularly frightening. The big sorority house is decorated for Christmas, in theory an oasis of warmth in the long dark, cold nights. But as you go upstairs, further away from the light and chatter-filled living room, past the dark wood panelling and large echoing bedrooms, up to the cobwebby attic filled with old children’s toys, the house becomes coldly frightening.

In some ways it’s a self-contained story (their house is the target even as the rest of university life carries on as normal), but it also seeps into the real world when the police have to look for both Clare and a child called Janet, who has gone missing.

The ending, following that “the call is coming from number 6 Belmont Street!” moment from a sergeant on the case to Lt Fuller, finishes on an utterly chilling note, made all the more shocking because it is so uncertain.

Black Christmas is something of a period piece, and it’s hard not to be swayed by the derivative films that have used its ideas since. It’s still a very unsettling and effective horror thriller though, with a fantastic performance from Margot Kidder as the damaged Barb. (Barb and Mrs Mac are the most fleshed-out characters.)

The murders themselves are horrible but look relatively tame by modern slasher standards. The psychological terrors, made worse by the confusion as to where characters might be, work better.  (Though yes, ultimately most of the women end up dead.)