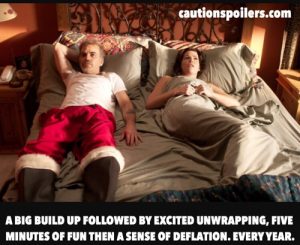 Bad Santa may have come out in 2003, but it has held up remarkably well. In fact the only thing that gives its age away is – like Alien – that Willie Soke can smoke pretty much anywhere.

I guess that the traditions of Christmas – the unflattering red and white suit, the annoying children, the permanent hangover – never really change from one century to another.

Willie (Billy Bob Thornton) has been to prison, been married twice, and been drafted. But these terrifying life events barely register compared to his annual job as the grumpy red giant: “I’ve seen some pretty shitty situations in my life, but nothing has ever sucked more ass than this”.

Don’t feel too sorry for him though. He’s a smoking, vomiting, drunk who puts the F into FC, and those are his good points.

His bad side involves peeing through his santa suit onto the department store floor, and stealing the takings.

In some ways Bad Santa is remarkably forward-thinking. The kid he meets and builds a friendship with is never fat-shamed. He’s bullied because of his size, but Willie doesn’t patronise him and the film doesn’t mock him. And Bad Santa‘s black humour combined with Willie’s appalling behaviour will strike a chord with anyone at that stage of Christmasiness where hearing another Ho Ho Ho will result in an Ow Ow Ow for the festive chortler.

Terry Zwigoff’s film is brutally, grossly funny but sometimes very bleak, and it’s best not to watch it expecting a heart of gold to miraculously appear. Even Willie’s girlfriend Sue, the nearest to a mother figure the kid is ever going to get, is a bit of an opportunist.

Willie works with Marcus (Tony Cox) as a department store Santa-and-elf team, and how Santa’s sidekick should be described is a recurring issue throughout the movie as the safe-cracking pair use Marcus’s diminutive size to confuse the do-right liberals around them.

At one point, after Willie is caught have sex in the store changing room and their sacking looks inevitable, Willie points out to general manager Bob Chipeska (John Ritter) the dangers of firing a “bald black midget”.

Each Christmas the pair change their names and take positions in a new store in a new town. And each year they rob the store after closing on Christmas Eve then go their separate ways before reconvening next festive season to do it all again.

Markus is very much the brains of the pair, and while Willie may be a great safe-breaker he’s not sober enough or a committed enough con artist to save or make enough money to give up everything and start a law-abiding life.

When Willie isn’t drinking, smoking, and destroying young children’s dreams in his grotto, he’s shagging like crazy; leaving women of all shapes and sizes happy, if unable to shit properly for a week.

But this year a meeting with a lonely, snot-covered, overweight boy (Brett Kelly), known for most of the movie as the kid, changes things, sort of.

I wouldn’t say that Willie becomes a proxy father. This is certainly a situation where it is best to keep in mind the saying “under commit and over deliver”. But the two of them certainly forge a genuine bond.

The boy’s mum is dead and his dad is in prison, so he lives in the huge family house with only his ancient, sandwich-making grandma for company. Willie initially sees an opportunity for burglary but soon has to ask to move in when his apartment is compromised by the police.

Despite Willie’s constant swearing, fornication and worst of all, mixing up the names of his North Pole elves with the seven dwarves, the kid still claims to believe Willie is Santa. But the season of goodwill is a time of suspending disbelief to let hope shine through, and though the youngster is sweetly guileless, he’s too watchful and self-reliant to be that easily manipulated without realising what’s going on.

He certainly misses nothing. Pointing out to Willie on their first meeting that Santa’s beard isn’t real, Willie tells him he got sick and all his hair fell out, as “I loved a woman who wasn’t clean.” “Mrs Santa?” muses the boy. “No it was her sister”. But gradually Willie is won over by the boy, and his kindness to a stranger.

Willie is never going to win Dad Of The Year. But increasingly he has the boy’s interests at heart, and after drunkenly eating all the chocolates in the advent calendar does finally feel something akin to remorse the next day.

While their relationship develops, that between Willie and the cleverer and more ruthless Marcus (and Marcus’s rather fabulous girlfriend Lois) moves from friendship to animosity.

Willie, held back by his short-termism, his addictions and the knowledge of his wasted life, has become increasingly unreliable and bitter over the years: “you’re an emotional fucking cripple, your soul is dogshit, every single fucking thing about you is ugly,” Marcus tells him, which is harsh in this season of goodwill but probably pretty accurate.

And there’s trouble on the horizon as store Chief Of Security Gin Slagel (Bernie Mac) starts investigating the festive pair.

Billy Bob Thornton is uncompromising in his portrayal of a misanthrope riven by bitterness and destructive habits that mean he doesn’t have to face the ennui of his lifestyle.

Brett Kelly is sweet and stoic but also bright as the boy, whose name is eventually revealed. And Tony Cox’s Marcus is sharp and alert; a solutions criminal whether working out how to get to the alarm system in time to switch it off before it activates, or trying to steal a fur for Lois that is wrapped round the neck of a full height mannequin.

Willie and Marcus’s collapsing business partnership, combined with police knowledge of what is going on, eventually pushes Bad Santa inexorably to its violent finale.

But hey this is Christmas, and a Christmas story needs a happy ending, even if it’s one stained red with blood rather than holly berries and candy canes.

Read my review of Bad Santa 2