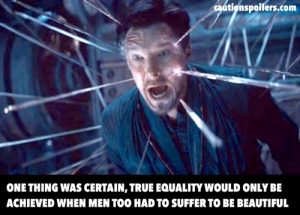 I enjoyed Avengers: Infinity War, despite or perhaps because I wasn’t always sure what was going on. A familiar superhero problem for me, though at least this time I spotted Stan Lee.

The movie is fantastic fun, a ballsy blast, though for me mostly emotionally unengaging. Admittedly I’m not that invested in superheroes, but also so many characters jostling for position with so many interweaving histories means it’s hard to delve deep this time, even in two and a half hours.

Thanos (Josh Brolin) is a stunningly good villain; his aim to get rid of half the universe as a population control mechanism is at least specific; and he’s an equal opportunities genocidal maniac, selecting victims from across the socio-economic divide. So he’s hunting down the infinity stones, gems which, when he controls them all, will allow him to achieve his “perfect balance”.

It turns out he’s been travelling to far-flung plants and gunning down half the inhabitants for years, so I’m not sure why he needs the stones. Maybe he’s tired, aiming for a quick finish and a well-deserved retirement? But it doesn’t do to quibble when the universe (quibble alert: half the universe) is at stake; it simply needs saving.

Enter the Avengers, all 568 of them, and it says something for Thanos that the likelihood of them winning is still declared by Doctor Strange (Benedict Cumberbatch) to be 14 million to one (or maybe that was the ratio of superheroes to villain).

Thanos swats them away like flies. Granted, some are scattered across the universe. But even when Thor (Chris Hemsworth) arrives on Earth, to turn the course of an epic final battle with his new super-axe, it’s no foregone conclusion.

That battle scene in Wakanda is extraordinary, reminding us what a breath of fresh air Black Panther was. M’Baku and his tribe are back (yes!), along with T’Challa’s people and a battalion of superheroes. It’s simply electrifying as thousands of Thanos’s scaly monsters head towards them across the plain.

The film ranges across the world (New York, Scotland, Africa) and the universe (Vormir, Titan, drifting in space) in search of the stones.

And with superheroes scattered on plains and planets, the special effects are stunning. As well as that Epic Final Battle (have I told you about the Epic Final Battle? Let’s just call it the EFB) I particularly liked the captured Doctor Strange hovering in mid-air, pierced by huge silver spikes, a visual representation of me when I had my fillers done.

There are plenty of jokes, some hilarious, some endearingly clunky, as much in their delivery as their content; some actors simply have better timing and chemistry.

There’s a witty testosterone-laden face off between alpha Thor and beta Star-Lord (Chris Pratt), but I particularly liked Spider-Man’s name troubles: “Oh we’re using made up names” he replies, after he’s introduced himself as Peter and received “Doctor Strange” in reply; followed later, mid-fight, with “Sorry, I can’t remember everybody’s names” (something I can completely relate to, as my kids Thingumy 1 and Thingumy 2 will attest).

He and Iron Man (Robert Downey Jnr) have a rather moving relationship. (Oh god more emotion. I’m going to start crying, and then I’ll have to change the “mostly emotionally unengaging” phrase at the beginning.)

I loved the Alien references; Spider-Man is a fan, but some scenes did transport me to that universe; the creatures rushing en masse during the EFB reminded me of the Alien Covenant flashback where an army of xenomorphs is released and kill all the Engineers on their planet, crawling over their victims.

Thanos obtains all the stones, and the random 50% start disintegrating into ashy dust. The Avengers are not immune, with Black Panther (Chadwick Boseman), Scarlet Witch (Elizabeth Olsen), Spider-Man (Tom Holland), Falcon (Anthony Mackie), Doctor Strange, and others succumbing (I tried to work out if we lost an accurate 50% of the Avengers but lost track).

The ending has shocked many – one teen in my screening looked dumb-struck coming out. My age brings a certain cynicism, but I doubt that half the universe and all those superheroes will stay dead in the next instalment (though what a contract negotiating tactic it is).

We’ve already seen Thanos reconstitute the last infinity stone, after the Scarlet Witch destroyed it; I’m guessing that what the infinity gauntlet tears asunder it can also put back together. And Strange has already seen one future in a parallel universe where the Avengers win.

Gamora (Zoe Saldana) too is dead, after Thanos threw her off a cliff, forced to sacrifice what he loved. Will she stay dead? I hope not, though bringing everyone back would seem like shark-jumping.

I said I felt emotionally unengaged, apart from, you know, all those emotionally engaging bits. Considering Thanos is such a brute, Brolin imbues him with remarkable depth. His relationship with Gamora (who he “rescued” in childhood while killing her mother and half their planet) is very one-sided. He genuinely loves her, though probably in the way that disturbed Old Hollywood icons adopted children like pets decades ago.

She doesn’t love him, which in many stories would give her power over him. Here, brute force wins. Considering how busy the film is, their relationship is properly, if quickly, explored (a testament to Brolin, Saldana and Ariana Greenblatt, playing young Gamora).

Unsurprisingly with such a huge cast many characters appear only briefly, though some still command the screen, especially Okoye (I liked her comment, as Avengers arrive in Wakanda, that she had expected opening up the country to mean the Olympics, or Starbucks.)

There’s one post-credits scene. Nick Fury (Samuel L Jackson) and Maria (Cobie Smulders) are in New York when the 50% rule starts taking effect. As they and millions of others start to crumble to ash, his distress call goes out to another superhero: Captain Marvel.

buy / rent on vod or buy dvd/blu-ray/4k from amazon.com