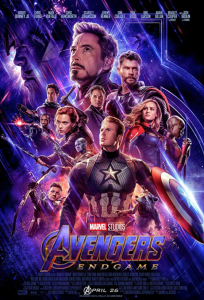 “How do I spoiler thee, let me count the ways…”

Apologies to Elizabeth Barrett Browning, but I’d have no idea where to begin with a spoiler-free review, so expect *some* plot points, themes, and comments on haircuts. I’m not telling you who dies, or stays dead, though I will tell you who can.

Avengers: Endgame is an intoxicating send-off, bristling with jokes, action and emotion that fans of the series will adore.

The emotional heft hangs particularly heavy in two areas: the history of the Avengers’ relationships with each other; and questions about identity that they must individually ask themselves. Have they failed? Who were they? What are they now?

I haven’t seen all 22 Avengers movies so some background was lost on me, along with probably a thousand in-jokes.

But you don’t have to have watched the other films to enjoy this balance of human interest and eye-popping action, and its sweeping sense of the epic, often within the same scene. The extraordinary, climactic battle is still deeply personal for its combatants even as they fight for humanity itself.

Post-Snap, the survivors are regrouping. There are introductions, too, as Carol Danvers (Brie Larson) appears, having rescued Tony drifting in space; then adding a frisson of disruption as the new girl, while the shattered Avengers try to make sense of what has happened. (My one criticism of Captain Marvel was that she was too strong an opponent and here the Russo brothers ship her off to planets new, which makes sense.)

Time looms large, for audience and characters – because this is the end of an era, and because it’s the barrier to turning things back to how they were. Yet after the Snap, time is something the world has plenty of.

Questions of destiny are inevitable with any time travel story, especially when megalomaniacs need to justify their actions. Indeed, “I used the stones to destroy the stones… I am inevitable”, Thanos (Josh Brolin) tells the survivors when they track him down.

The grief-stricken Avengers bat recriminations back and forth, but it’s deflection to stop themselves dealing with their fears. Humour at this stage is mostly snark: “until this exact second I thought you were Build-A-Bear” Tony (Robert Downey Jnr) tells Rocket. Natasha (Scarlett Johansson) tries to hold everything together while pushing for an attempt at rescue.

But then there’s another jump, of five years, during which the world started to get used to its emptiness. The Avengers battle with themselves and each other over whether to move forward into this new but different world, or seek to return what was lost and risk losing even more.

It’s most complex for those whose loved ones survived Thanos. Steve Rogers (Chris Evans) is coming to terms with moving on, and there’s a sweet scene as he and other survivors sit in a circle in a school hall, like an AA meeting, discussing their baby steps towards normality.

Thor (Chris Hemsworth) has found solace in beer and fast food, to help him forget that he no longer feels himself truly worthy. Clint Barton  (Jeremy Renner), his family lost, is a vigilante (a hot vigilante with great hair, if I’m honest).

Tony (for whom this film feels as much a love letter as for the fans) has most to lose, sitting next to Pepper Potts (Gwyneth Paltrow) on the sofa in front of the fire, while she reads about composting and their little daughter sleeps upstairs. The world is half-empty, but it’s also peaceful and calm. Life proceeds at a slower pace for most people, in America anyway, with time to carve endless names into giant stones, memorialising the lost. Though there are still reminders: pavements covered with abandoned belongings, trees and lampposts encircled with Missing posters.

The return of Ant-Man, and his knowledge that time works differently in the Quantum Realm, offers a probably impossible solution: to go back in time pre-Snap and collect the scattered infinity stones. It’s Tony who has the ability to make Scott’s “Time Heist” work, despite his reservations.

Ant-Man’s return has him bursting from the Quantum Realm into his brown van, convinced he’s only been gone a few hours. He lightens the atmosphere considerably. Scott Lang is self-effacing, funny and loving, and this is another warm and winning performance from Paul Rudd. He’s never heavy-handed with the jokes, in a film which though funny also has much ponderous phrasing designed to be quotable. (And because I love Scott and Hope so much I am going to tell you that HOPE LIVES. Also, his time travel tests are hilarious.)

Despite warnings about not messing with timelines, and certainly no chatting to the Old You in the past, much does not go according to plan. Nebula faces a showdown with her younger, angrier, self, desperate for fatherly approval, and becomes an unknowing conduit between Future Nebula, Past Nebula and Past Thanos. Karen Gillan is excellent – the pain of both versions of her is palpable.

(The time travel raises many questions about parallel universes, timelines, and who is dead and where. For a VERY spoilery list of the dead and unaccounted for at the end of Avengers: Endgame that looks into this, read this Time article.)

The Avengers’ thinking borders on naive at times. The aim is to bring everybody back, to five years post-Snap. Really, I can’t think of anything more disastrous for a planet than to suddenly double the population in a world that has got used to feeding and clothing half the number and won’t be geared up for anything like this. At least make some sandwiches.

The final showdown with Thanos and his minions, as those Avengers that are able to return emerge through the light into a wasteland battlefield, could probably create a similar surge of emotional energy in its audience big enough to power the National Grid.

Amongst the fighting there are plenty of heart-lifting moments. Captain Marvel, flying back through space just when she’s most needed (and with a funky new hairstyle) is inspiring enough, even before the other female superheroes appear behind her as a back-up crew. The reunion between Iron Man and Spider-Man (Tom Holland) is desperately touching, at a moment when we still don’t know if either will survive.

In this time-travelling story overflowing with superheroes in the past and future, it does sometimes feel as if everyone has to have a line. Avengers: Endgame is long – three hours, as everyone should know by now. And it feels long, though not three-hours long.

There are a lot of stories to bring to closure though. Within that time there are still aspects that remain unexplored, even for me without the detailed knowledge of this world – aspects that didn’t really become apparent until later.

Endgame is a long and poignant farewell – because nothing itches at one’s memory like a goodbye said too quickly.

Not everyone survives. It would be silly if they did. But this film is an almost total victory.