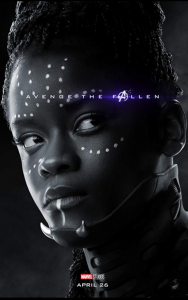 It’s only two weeks until the release of Avengers: Endgame.

We’ve seen the Marvel posters showing which of the Avengers did and didn’t survive Thanos’s Snap. And there were plenty of empty seats on stage at the global press conference last weekend.

Check out the press conference videos below (in four parts), plus a NEW film clip, a featurette , TV spots, and those character posters. (You can watch the trailers here.)

We don’t know about the rest of the world though. With 50% of the population gone, where does that leave Take That? Are they a duo now? Which two? Because I don’t think Robbie and Gary are going to work long-term.

And what about Brexit? If all the Leavers have been turned to dust can we stay in?

NEW film clip “Because before you didn’t have me”:


“You could not live with your own failure. Where did that bring you? Back to me” Thanos 30 second TV spot:

Avengers: Endgame gone (but surely not for good?)