You are here: Home / Film Reviews / Ant-Man And The Wasp 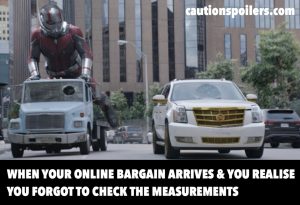 Scott Lang – Ant-Man, father, and according to the trophy his daughter gave him, World’s Greatest Grandma – is only a few days away from the end of his two-year house arrest after his breaking of the Sokovia Accords.

So it’s unsurprising he’ll end up entangled in a plot that requires him to be anywhere but home.

Scott (Paul Rudd) has been spending his time building up his security business with Luis (a scene-stealing Michael Pena), playing the drums, learning magic tricks, and looking after his daughter Cassie, and all while spending two hours in the bathroom each day.

But after a strange dream about Hope van Dyne (Evangeline Lilly) and her mother Janet (Michelle Pfeiffer), who has been lost for 30 years in the psychedelic Quantum Realm, he contacts Hope and her father Hank (Michael Douglas), who are still in hiding – only to discover his dream coincided with them first firing up the Quantum Tunnel they’ve been building in an attempt to locate and Bring Her Home. (I know, wasn’t Matt Damon available?)

His dream turns out to be a Quantum Entanglement, with Janet using him to pass a message on to her family.

This is a superhero film that will genuinely appeal to adults and older children alike, without giving each demographic separate jokes.

My 9 year old hasn’t stopped talking about how hilarious it was. And while I didn’t find it the most knuckle-whiteningly exciting superhero film ever (at one point we’re told this is their last chance to save Janet for 100 years, which just felt like an In-App Excitement Add-On) it was a very enjoyable way to spend a couple of hours.

It’s also choc-full of endearing characters, with everyone getting their own funny moments.

And as a mother I certainly approve of any film focussed on getting mom back after 30 years, though my children might regret it once they’d had to listen to three decades’ worth of nagging reminders about tooth brushing and writing thank-you letters, once I reappeared.

Escaping the attentions of Jimmy Woo (Randall Park), his FBI babysitter, is made easier if your kidnapper is a wasp who can shrink your getaway vehicle in milliseconds, but just to be sure Hope leaves decoy giant ants in his house designed to mimic Scott’s very routine routine (including those bathroom visits).

To get the tunnel working properly again they need a new part, which Hope has ordered from sleazy black market middle man Sonny (Walton Goggins). But the handover goes wrong when he tries to double cross them, and while Hope is fighting Sonny and his henchmen a strange ghost appears who then steals Hank and Hope’s shrunken lab.

Ghost woman is Ava Starr, who after an accident involving her father Elihas’s experiments is suffering from Molecular Disequilibrium as her cells break up and reform constantly. Dying and desperate, after a childhood weaponised by S.H.I.E.L.D, she’s now protected by the gently supportive but ultimately upstanding Bill Foster (Laurence Fishburne), the father figure she needs when her pain drives her to save herself at any cost.

Ava fades in and out, slightly shimmering, looking like Darth Vader if he decided this season was all about neutrals and bought his new outfit from The White Company. (Hannah John-Kamen is very moving as Ava. Her chronic pain leads to all-consuming distress, and her bad choices are entirely understandable. She’s less a villain than a figure of pity.)

Ava believes Janet’s Quantum Energy can save her – but Janet’s death could be the cost of her cure.

Ava, Sonny and the constant need to keep Woo in the dark, mean Hope and Scott are fighting off threats at every turn. The action scenes, with constant shrinking, upsizing and up-upsizing are fun and frenetic, as they whizz around town in cars and vans tiny and huge.

The humour, usually from Scott, perfectly undercuts the typical blockbuster dialogue whenever it threatens to fall into sentimentality or cod-physics. “I don’t think you got the gist of the game” he explains as Hope gets emotional talking about hiding in the same wardrobe every time she played hide and seek with her mum as a child, and “do you guys just put the word ‘quantum’ in front of everything?” as he has to listen to yet another scientific explanation.

There’s also some very in-your-face product placement, which I shall both criticise for its obviousness while also ensuring the trend continues by giving shout-outs to ENTENMANN’S CAKES and HOTWHEELS.

Lilly and Rudd are the perfect team as Hope and Scott, balancing work and gently burgeoning romance; with Lilly shining as Hope, both unstoppably physical and driven by love for her mum.

Michael Pena is a dream as Luis, who met Scott in prison and now runs their brilliantly named security company X-Con. When Sonny gives Luis a truth serum in order to discover Scott’s whereabouts, the ensuing 100-miles-an-hour stream of consciousness, complete with flashbacks where Scott and Hope speak in Luis’s voice and street-talk style, had both me and my son in stitches.

I also loved their two employees Dave (Tip ‘TI’ Harris) and particularly the melancholic Kurt (David Dastmalchian), who has an obsession with Russian witch Baba Yaga.

Michelle Pfeiffer tops and tails the movie – in her current film renaissance she seems like she’s having a ball.

It was also lovely to see the 60-something Hank all suited-up as he heads into the Quantum Realm to look for his long-lost wife. (Do the Avengers age? I really want to see them all in 30 years, saving the world while facing the very real problems of growing older, but infused with wisdom and Werther’s Originals – look, there’s your next product placement right there, Marvel.)

Obvious spoiler time, but they do get Janet back. And she has aged after three decades, which while essential for a realistic reunion with the 73 year old Michael Douglas, still rather bucks the Hollywood tradition of ancient leading man and 20-something love interest.

The credits scenes: the post-credit scene is just one of the giant ants playing Scott’s drums. The mid-credit scene is weep-worthy until you realise Thanos’s mass murders at the end of Infinity War will have to be reversed in some way, for at least some of Marvel’s superheroes. As Janet and Hank work with Hope to send Scott back into the Quantum Realm, using their new reduced-in-size Quantum Tunnel housed in the back of a van, they suddenly become piles of ashy dust on the ground. Scott meanwhile is stuck in the Quantum Realm.

Still, we know this isn’t the end for the World’s Greatest Grandma, as yes, Ant-Man is coming back for another instalment.