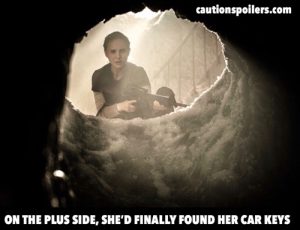 If there had been a pub in the deserted Area X zone where the all-women group of scientists is sent on a reconnaissance mission, I could have begun this review with “a biologist, a paramedic, a physicist, a psychologist and a geologist turn into a bar…”

Annihilation gets under your skin, and leaves lots of unanswered questions. Who are we? What – literally – makes us? Are we immutable? Are we immortal? Maybe don’t Google afterwards though, lest you discover everyone else had an entirely different take on the bits you thought you understood.

Alex Garland’s latest venture is a genuinely frightening film mixing jump-scares and unbearable tension with aplomb, all overlaid with a blanket of general unease and paranoia. It’s made worse because the group’s trip into Area X is told in flashback – pretty soon we know exactly who didn’t make it home, but not much about why.

And trip is the word, as sometimes it seems to be a psychedelic Eden they’ve walked into, where deer sprout pretty cherry blossom on their twig antlers, and flowering bushes grow into human shapes, like living sculptures at the most on-trend English society garden party.

Lena (Natalie Portman) is a biology professor, specialising in cells; how and why they divide, how they become malignant. All of us in the world, and possibly the universe, every cell in our bodies, is descended from one single, original cell that simply started splitting.

Her husband Kane (Oscar Isaac) disappeared a year ago on a shadowy military mission – until one day he walks right back in to their house, the only person ever to return from The Shimmer. But now he’s in intensive care, his organs failing, and desperate to do anything that could help save him, Lena volunteers to join an all-scientist, all-women exploration party back into the mysterious Shimmer, or Area X.

The Shimmer has been there for three years, and is expanding; its perimeter marked by a wavering curtain of pastel colours, a vertical version of the tiny oil slicks we used to find on puddles as children and think were rainbows.

There’s a limit how long the authorities can tell the local populations that they’re being evacuated because of a chemical spill. Several military and scientific missions and unarmed drones have been sent in, but only Kane has returned.

A horticultural dream and a zoological nightmare, this is part horror, part fantasy, and part human interest drama. And the closer the team get to the lighthouse at the epicentre of The Shimmer, the more terrifying their experiences.

Lena and her co-explorers display varying levels of fear, stoicism, drive, and even nihilism. All have endured experiences which make them perhaps the best and worst people to venture into the unknown.

Psychologist Dr Ventress (Jennifer Jason Leigh) is self contained, without friends or family. Geologist Cass Sheppard (Tuva Novotny) tries to calm the others but doesn’t know what she is anymore after losing her young daughter to leukaemia: “two bereavements, my beautiful daughter and the person I once was”.

Cambridge physicist Josie Radek (Tessa Thompson) hides her self-harm scars and struggles from the start with The Shimmer’s absence of scientific rules. And forthright paramedic Anya Thorensen (Gina Rodriguez) is the one most determined they leave when they discover horrific evidence of what might happen to them, left behind by those previous lost exploration parties. An ex-addict, Anya is also most aware of her own emotional collapse once they’re faced with the (un)realities of The Shimmer.

This is a remarkably beautiful film. Not so much the flash-bang special effects, which on occasion veer into Austin Powers psychedelia, but the twisted natural phenomena. Pretty flowers entwine trees and abandoned homes; stunning lichens bloom along utilitarian perimeter walls. Giant glass snowflakes on stems litter the sandy beach. None of them should be there – each stem holds flowers for several different species.

The animals are like nature’s try-outs: a giant alligator (don’t @ me if it was a crocodile please, I was admiring the flowers) with teeth from other creatures entirely; a huge bear-like monster from your nightmares, its face part human skull, breathing behind you. The scream of its last victim echoes from its mouth, absorbed at the moment of killing, like a keepsake a murderer might take from the scene of the crime.

The performances, even up against such grand and unknowable ideas, lift the film even higher. The whole all-women team are entirely believable as they trudge through a bizarre landscape that’s literally changing them, after years spent battling metaphorical demons. Tessa Thompson’s nervy but ultimately accepting Josie, and Natalie Portman’s guilt-ridden and quietly desperate Lena, are stand-outs in an ensemble of superb performances. And whatever you make of The Shimmer, it’s certainly devoid of the male gaze.

Annihilation is our battles between god and science; two things that can’t really go together but like everything else in this movie, somehow manage to defy those rules.

Those pretty flower-filled glades are a kind of malformed Eden. A communications tower, now covered in entwining blooms, looks like a cross reaching for heaven. But eternal life isn’t benign in science: “malignant like tumors” says Lena of those blooms spreading along walls, her knowledge of senescence – cell immortality – filling her with utter forboding; Dr Ventress thinks we are programmed to self-destruct.

In the final act, Lena is faced with trying to decipher what is real and what is a copy, but it’s a mimicry that feels automated, not driven by consciousness. Whatever brought The Shimmer, even if it is alien, seems to be neither malevolent or benign; it just is, but it’s conflicting with us. A weed is just a beautiful flower in the wrong place after all.

Maybe The Shimmer is just an updated, mutated version of the Gaia theory, that idea beloved of 1970s ecology activists that everything living and not living on earth is part of a whole that somehow works together to maintain itself and its surroundings.

Despite the scientific misfiring in The Shimmer, and the soulless mimicry, this is also an emotional film. Struggling with relationships, and with their own minds, these scientists are still coping with their own experiences which broke the expected rules: depression, addiction, early death, guilt at betrayal in a loving relationship.

Already emotionally altered, The Shimmer simply takes them a step further. The women sent in to explore it have had their own reasons for existing taken from them: “I had to come back. I’m not sure any of them did” says Lena, as she’s interviewed on her return.

Annihilation was released on Netflix in the UK on 12 March 2018.