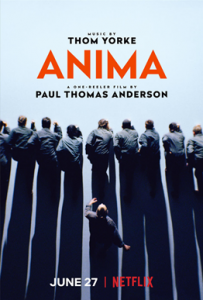 Anima is a sometimes mesmerising experience – ironic when you consider both the soundtrack (it’s a film “best played loud”), and that it’s a denunciation of dystopian societies, whose messages to control their populations can be almost hypnotic.

This is a film that moves between dreamlike and nightmarish, from realistic settings to the entirely stylised.

It’s certainly entertaining, if disturbing, as well as being ruefully witty – especially if you’ve ever commuted to a job that left you feeling you were a cog in someone else’s machine. <waves to everyone>

This is a one-reeler – shorts on one reel of film that traditionally were played before a main feature during the silent era (and at only 15 minutes long we can be back to work in no time, dystopian society owners!)

A  collaboration between Radiohead’s Thom Yorke (who composed the soundtrack and stars in the film) and director Paul Thomas Anderson, it’s quarter of an hour of music and movement, starring York himself, and Dana Roncione as a woman he spots of the train.

Anima isn’t saying anything particular new, though a hallmark of twisted societies is that they reinvent themselves through history with different ways of control, so its not as if we don’t need reminders.

Careering through a tunnel, a train carriage full of commuters are all are dressed in similar dark blue thick cotton workwear. The film was shot in Prague and the costumes hark back to that “workers unite!” communist era.

Everyone is dropping off in their seats, from tiredness or boredom. The choreography as they fall asleep is perfect, with heads gradually lolling forward or to one side, then a twitch as they wake a second later. Soon these movements become simultaneous, with the unison and conformity of an early ’90s boyband dance. It’s rather beautiful.

I saw Anima in IMAX (it’s released in that format for one night only on Wednesday 26 June, before hitting the streaming service the next day) and while it was indeed loud, it does feel entirely fitting. (I do have small children though, so it’s possible my version of loud isn’t yours.)

Yorke has an album of the same name featuring the film’s electronic music coming out on the 27 June, made with longterm collaborator Nigel Goodrich. Yorke has said the album’s themes include “anxiety and dystopia” which certainly sums up the film: worries about society, totalitarianism, conformity, whether escape is possible, and the joy of freedom.

He also scored last year’s Suspiria remake, and my first thought as I watched Anima‘s stunning choreography was how much it reminded me of some of the dances in that film: those jarring movements when one’s body is not under one’s own control. (It turns out Damien Jalet was choreographer on both.)

As Anima progresses, Yorke – who is trying to return a neat black bag to Roncione – constantly attempts to either move against the tide, or, when he does try to conform, is thwarted. It’s initially a curse but ultimately a blessing. The other passengers don’t just move as one as they try to leave the station but are happy to do so, barriers literally opening for them.

The bag’s owner seems entirely self-possessed in a world of drones and worker bees. If he can get to her, what could happen?

Anima is on Netflix from 27 June.