You are here: Home / Film Reviews / Always Be My Maybe 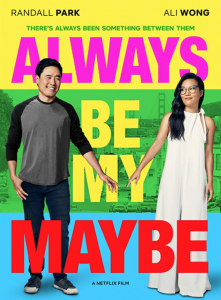 Sasha Tran (Ali Wong) is magazine cover-famous. She’s a top chef with a successful LA restaurant, another about to open in San Francisco, and a New York venue coming later.

Her childhood friend friend Marcus Kim (Randall Park) is lamppost-famous. His flyers for his 15-year-old band Hello Peril have finally reached the other side of San Francisco, after years playing the local dive near his home.

She’s talented, accomplished and incredibly stylish, engaged to a successful entrepreneur. He looks, according to Sasha, like “a homeless astronaut” in his blue work overalls with a Marcus label sewn on.

Reconnecting now she’s back home, can they bridge the gap that time, ambition and lifestyle have put between them? And what has Keanu Reeves got to do with any of this?

In a zingy if surreal extended cameo, Reeves plays Sasha’s celebrity boyfriend – which means that combined with the friend-zoned childhood pal, Always Be My Maybe is both looking at the stars and, if not exactly doing so from the gutter in the manner of Oscar Wilde, is grounded in eternally recognisable relationship situations.

Like most romcoms, this is about the journey rather than the wholly expected destination, and Always Be My Maybe travels that path with confidence, grace and élan.

Directed by Nahnatchka Khan, it crackles with relatable jokes and good-humoured cultural references (most characters are Asian-American). Using common romcom tropes (a shared history, diametrically different lifestyles, a grounded assistant, everyone realising they’ve forgotten who they wanted to be) it still steers determinedly around stereotypes, particularly with its female characters.

Successful and driven, Sasha isn’t portrayed as someone who’s got too big for her boots. She may have lost her way a little but she’s never expected to give up her dreams. Marcus’s girlfriend Jenny (Vivian Bang) is a ditzy do-gooder but she’s also a kind person who works to make the world a better place.

Marcus’s family are Korean, and the young Sasha – already carefully plating up her lonely meals for one with a pink cocktail umbrella while her parents are out all day working – initially learns the principles and details of cooking Korean food from his mother Judy.

Fast forward to the present day and Sasha, temporarily back in San Francisco to oversee the opening of her new restaurant, finds that her assistant Veronica (a brilliantly dry Michelle Buteau) has employed Marcus and his dad Mr Kim (James Saito) to sort out the aircon in Sasha’s new rental.

Sasha is no longer the grounded cook making simple dishes from the best ingredients – “I’ll do for black flowers what I did for fish sauce ice-cream” she says to her fiancé Brandon (Daniel Dae Kim) when planning her wedding bouquet.

While she’s changed, her childhood friend is still all too authentically 2003-era Marcus. Too scared to stray outside of his comfort zone, he’s still living with his dad, and still driving that Corolla.

Sasha finally dumps Brandon (“I hope you get malaria and shit yourself to death” she shouts, and I hope her influencer skills do for break-up last words what her culinary ones did for fish sauce ice-cream).

Marcus is her sounding board over her battered romantic life, but she’s soon loved up again, with Keanu Reeves playing hot new boyfriend Keanu Reeves, gleefully twisting his own public persona while sending up the self-applauding and vacuous cod-spirituality spouted by modern A-listers. (“The man who embraces his mediocre nothingness shines greater than any”, he tells Marcus, a good motto to fall back on if you’re exhausted trying to overcome your Imposter Syndrome.)

They double date with Marcus and Jenny at Maximal, one of those millennial restaurants so cool the bill is inversely proportional to the portion size, and honestly, I haven’t seen so many knitted hats in one place since the 1970s heyday of The Flumps.

But this isn’t mere food. “Do you have any dishes which play with the concept of time?” he asks the waiter, and for a brief moment I thought I’d finally found somewhere serving the authentic cuisine I produce myself, though it turns out that doesn’t actually mean leaving it in 30 minutes too long then being surprised it’s charred to a cinder. This is one of those movie meals that – with its “all-black monochrome course” and dish of smears offering “the flavour of caesar salad” – may have you salivating but only for a giant portion of cod and chips.

Later the four of them play a game called Vice Breaker, where everyone answers embarrassing questions, with Keanu claiming his first crush was Mother Theresa. (Mine was British politician David Owen. If you’re too young or too American to know who David Owen is, imagine Jeremy Irons talking sexily about electoral reform.)

This is the second film recently where a high-achieving, beautiful and stylish woman falls for a slightly bitter, poorly-dressed, dope-smoking bloke from her past. While the set up on Always Be My Maybe feels more real than that in Long Shot, I didn’t see Marcus and Sasha’s passion for each other. They sparkle as long-term friends, not would-be lovers. It feels uneven; we’ve also been laughing at pretentious “emperor’s new clothes” restaurants in the chip shop afterwards for years.

Still, the jokes, cultural viewpoints and twists on traditional romcom stereotypes conquer (nearly) all. These are rounded individuals with elements of shared history, yet with their differing Asian backgrounds (Korean, Vietnamese, Chinese) always acknowledged.

Wong and Park are on great form, she as a woman being sucked into a world that places novelty over authenticity, he as a man using that authenticity as an excuse not to try anything new.

It’s often hilarious, the jokes here being far from Maximal’s teeny, unsatisfying portions (the screenplay was written by Wong, Park and Michael Golamco). Comedy-wise, this is a winner. Expect the huge bowls Marcus tells Sasha authentic Asian food should be served in, not ephemeral but unfilling “chrystalised lavender sugar bubbles”.

Always Be My Maybe is available on Netflix.

Watch the trailer for Always Be My Maybe: