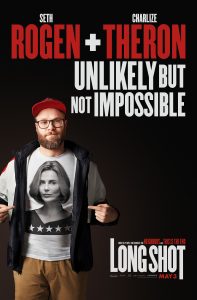 Charlotte Field (Charlize Theron) is Secretary of State, working under President Chambers (Bob Odenkirk) whose route to power was a decade spent playing the president on TV. Which is very funny (Odenkirk is a dim, narcissistic hoot) and would also be unbelievable were it not for Ronald Reagan, and that comedian who just became president of Ukraine.

Every minute of Charlotte’s day is micromanaged while she manages her brief and gears up for a presidential run – with the environment, a cause close to her heart since her teens, her big project.

Field is subject to much greater pressures than Chambers. Witness Lisa Kudrow’s polling expert, explaining Charlotte’s ratings for those female presidential essentials: charm, elegance and hand-waving. (To be fair Charlotte’s waving technique is weird. I wouldn’t vote for it.)

Fred Flarsky (Seth Rogen) knows Charlotte from 25 years ago, when he was 13 and she was his 16 year old babysitter. He’s had a crush on her ever since, though he’s terrified she’ll remember the time when his attempted kiss resulted in a tiny yet noticeable boner. (Poor Fred may be basing his fears on the story of Edward de Vere, Earl Of Oxford, who after accidentally breaking wind while bowing to Queen Elizabeth I, was so mortified he left the country for seven years. On his return she greeted him with “my Lord I had forgot the fart”. Don’t try to claim you don’t learn about key moments in history from this site.)

Fred – a hands-on investigative journalist driven to bring down the actual Evils of Capitalism that hide behind the generic Evils Of Capitalism  – quits his job when the ethical newspaper employing him is bought by one of the very business conglomerates he despises.

Long Shot is very much about idealism and the ethics of compromise, in the workplace, world relations and relationships: when high-mindedness turns into pomposity or the middle ground turns out to mean caving in to pressure. Both try to keep alive what’s important to them, though Charlotte’s habitat is more crocodile-infested, as she navigates ambassadors, ministers and presidents on a mega tour around the world to get her Bees, Trees and Seas environmental project off the ground.

Fred is at a party with his friend Marvin when he finally reconnects with Charlotte. Marvin (O’Shea Jackson Jnr) and Fred both stick out at the do: Fred because of his purple and green shellsuit jacket, Marvin because he’s black.

But Charlotte needs a joke writer to get that humour rating up, and with Fred at a loose end he’s the perfect candidate, if they can find a point where their morals and ethics meet. As Charlotte travels round the world on tour, wining and dining, making speeches, persuading recalcitrant presidents, her popularity sky-rockets, redirecting attention away from the President. She’s like Princess Di in the 1980s, eclipsing Charles wherever she went (though Diana had a better wave).

Fred travels with her, his contributions to her speeches becoming less angry and more real as he helps her remember her teenage years and her youthful idealism. In a film about his lack of pragmatism he’s actually a pragmatic writer.

The dialogue sparkles with wit and an understanding of how high-powered women have to operate amid the extra pressures they’re under. Charlotte doesn’t have time for feminine niceties; any spare seconds that could be used for the ego-stroking she loathes have to be kept for world leaders.

Rogen and Theron have fabulous chemistry. Theron’s comic timing is perfect, whether she’s just been woken up from micro-napping (standing up with her eyes open) or is trying to avert an international crisis while on drugs.

And while many of Charlotte’s frustrations revolve around the media’s obsession with her appearance, it would be remiss of me not to comment on it. As with so many powerful women her clothes say something about her. Charlotte is supremely stylish, but her outfits are practical and unfussy, designed in their neutrality to be immune to criticism, mimicking her self-contained character.

They’re also fabulous though: elegant, glamorous, expensive, the kind of perfectly groomed look many of us strive for while knowing deep down we’re more Fred Flarsky falling down a flight of stairs at a party and landing in front of Boys II Men. Or Fred Flarsky in Swedish national dress when everyone else is in black tie and evening gowns. Or worst of all, Fred Flarsky in that purple and green shellsuit jacket.

The supporting cast is terrific, particularly June Diane Raphael as Maggie, Charlotte’s Fred-loathing assistant, and O’Shea Jackson Jnr as Marvin, who is far more complex than his new age-y success mantras indicate (though they do seem to work).

Bob Odenkirk’s President Chambers is a monument to self-promotion, stupidity, naïveté, and narcissism. I wouldn’t say he’s modelled on Trump but he does seem like an amalgam of most of the last few leaders of the Free World. The only leadership trait he doesn’t have is psychopathy, as he’s too dim.

Long Shot is a great title and one that gets better as the film goes on, from Fred’s likely chances with the clever, poised, busy and beautiful Charlotte, to the cameras following her, to, well more besides.

As Agent M, one of Charlotte’s bodyguards, tells Fred when he asks that no one find out he and Charlotte spent the night together: “they wouldn’t believe me anyway.”

It’s also often surprising, as ideas about people and beliefs are turned on their heads. While this makes it a comedy blissfully devoid of stereotypes, it does start to veer into “why can’t we all just get along” territory, which is useful up to a point but also ignores how inequality is reinforced by the very power structures they want to dismantle. It also dips a bit in the middle and could have been tighter if it lost a few minutes. Still, you can’t have everything.

And Long Shot has more than enough. It’s consistently hilarious – though I’d pay to see it anyway, just for the final gag at the end, about a certain dead president.