You are here: Home / Film Reviews / All The Money In The World 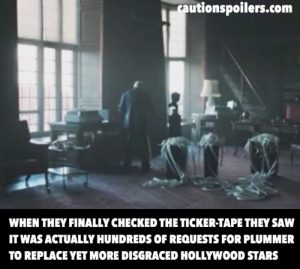 “A man who has children gives hostages to fortune” said billionaire miser J. Paul Getty’s own father to him, a maxim that is not about money but about saying or doing something that sets you up for trouble in the future. Though in this case it is both, as descendants of billionaires are obvious kidnap targets.

But the abductors of his teenage grandson Paul make one huge error, targeting a boy whose mother is broke and whose mega-rich grandfather never pays full price for anything, if he pays at all.

Always be prepared to walk away from the table says Getty (Christopher Plummer), and I hate to say it but his actions – while reprehensible –  seem to work. By refusing to cough up, the ransom demands go down and down. From 17 million dollars initially, to 7 million then lower still.

As a child Paul (Charlie Plummer) and his family are sent for by Getty, but his father’s descent into drug addition leads his parents to divorce. Gail (Michelle Williams) keeps the children but loses the money.

Paul and his grandfather are genuinely close, and the boy seems to have a special place in the place where Getty’s heart should be.

Now 16, he’s been enjoying Italian life, bolstered by an easy, money-induced confidence, until he’s snatched off the street.

Gail may be broke (she’s in arrears on her apartment, rather than enjoying rich person poverty). But she still has the outfits from her wealthy past. And it proves that quality lasts, often longer than the marriage that bought it. She dashes around, elegant in her boucle Chanel suit and quilted handbag, trying to keep a lid on her desperation, in her bid to bring her son home alive as she takes on the shadowy group holding him and a business empire.

This is 1973 and unsurprisingly for a woman caught up in a high profile crime, Gail is judged by police and public: for not crying; even for not not eating. She’s accused of faking the kidnapping to extort money. Reporters chase and taunt her. Across the sea different reporters laugh at Getty Snr’s jokes even as he makes clear he won’t be paying a ransom.

The kidnappers were not expecting such a recalcitrant payer, assuming Gail has money. Eventually Paul has been held so long in his stone cell in the Italian countryside, he is sold on to another gang. The days are getting colder, everyone’s getting more jittery, and probably bored.

Romain Duris is brilliantly, jerkily, edgy as the grubby Cinquanta, one of Paul’s abductors. In a sort of reverse Stockholm Syndrome he becomes rather protective (relatively speaking – he’s not averse to assisting with ear removals). He’s also the main point of contact with Gail. The two are similar; out of their depth and being sucked further in, and both have to lose (admittedly to varying degrees) some of their humanity in order to influence monsters with far less. (He also bears a remarkable likeness to Take That’s Howard Donald.)

Meanwhile Getty instructs his fixer and security man Fletcher Chase to “…bring [Paul] back as quickly and inexpensively as possible”. Chase (Mark Wahlberg) is initially Getty’s man, uninvolved in Gail’s emotional trauma, though gradually as his fondness for her grows so does his disgust with his employer (though his big speech is melodrama, even in a world where feverish wealth heightens everything).

They do know they’re getting Paul back at some point; the question is alive or dead, and in how many pieces. The ear removal scene is grisly and lingering (does it really take that long to cut off an ear?) But we are also regularly informed that it’ll be a foot, or a hand, or a head next.

The teenager copes remarkably well. Charlie Plummer portrays him as initially charming and shallow, jokily requesting a discount from a prostitute because of his youth, before his abduction. His emotional health holds up best – for a 16 year old, he finds reserves within himself which are both impressive and believable. But physically his decline is frightening and by the end of his ordeal his skin is mottled, his head covered in sticky infected blood.

And Getty? It’s easy to imbue a man like him with sadness and loneliness, sitting in his mansion surrounded by the art of dead people. But he seems rather happy. Especially when it turns out even ransoms can be offset against tax (up to a point – the authorities don’t want to encourage the abduction of rich offspring).

And in a film mostly devoid of humour even of the bleakest kind, there’s a brutally funny scene where Getty is negotiating over what we think is his grandson’s life but which turns out to be a painting, beautiful but of dubious provenance. For Getty there’s a purity in objects, even fakes.

Plummer is excellent, and at no point does the film look like a re-stitch job (he replaced Kevin Spacey as Getty for very last minute reshoots). His Getty towers over the movie far more than his screen-time would suggest, in a way we would think malevolent and Getty would simply see as neutral. Plummer portrays him as a complex man who is still unknowable at the end, despite what Getty himself says about money being the route to understanding someone.

Williams is simply magnificent, a coiled spring of barely-held-in-check emotion and jittery, adrenalin-fuelled tension. Her despair at her ex father-in-law, ex-husband and even the Italian investigators, combined with her awareness of her own limited room for manoeuvre, is heartbreaking.

The bright bustle of Italian city life contrasts nicely with the dark cool interiors and high ceilings of Gail’s Roman apartment and Getty’s English mansion. Though Ridley Scott’s film is at times too languid when settling us into the dusty Calabrian countryside.

And at 140 minutes the film is twenty minutes too long; sometimes it feels like we’re experiencing the kidnapping in real time. “Run faster!” I meanly thought, checking my watch as school pick-up time loomed ever nearer, and a scared bloodied teenager staggered on.

“Everything has a price. The great struggle in life is coming to grips with what that price is.” Getty is eminently quotable and such lines fall from his lips as fast as the tickertape from his constantly-monitored machine.

The problem is that we are so used to quotes like this from the thousands of self-help books out there, that nowadays such utterances can sound trite. Having said that, All The Money In The World while occasionally heavy-handed, mostly avoids preachiness.