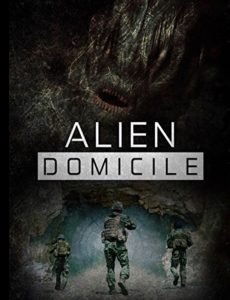 Four government workers wake up groggy and uneasy, to find themselves in a large windowless room, their arms showing signs of an injection.

They all have memories of their mornings so far, memories which eventually unnerve rather than comfort.

Russell Turner (Michael Moneiro) thinks it’s a drill, and unpleasant though it is, they’ll be released soon: “it’s procedure… they pretty much own you”.

And then the hallucinations start, gruesome living nightmares that may or may not have their origins in reality.

We are in Area 51 in Nevada, home to one of the most enduring alien conspiracy theories and so many spoofs that it’s always going to be hard to come up with a story that is genuinely scary.

Russell is an avuncular figure who tries to reassure, but it’s soon clear he’s as in the dark as everyone else. Dimitri (Eduard Osipov) is worried but cooler-headed, refusing to discuss life stories until he has a better understanding of what’s happening. Hanna (Elly Brown) is a civilian cyber security auditor.

There’s much that is derivative about Alien Domicile, and one wonders why bother to make a low-budget version of excellent big budget films. Alien (and its many sequels and prequels) is the obvious comparison, with its dark tunnels and an unknown enemy or enemies they don’t know how to outwit, outrun or even kill.

But there are also shades of Event Horizon, as characters relive emotionally distressing events from their lives.

Alien Domicile‘s plot is all over the place with more holes than Jason Voorhees’ hockey mask, and the film isn’t nearly as exciting as it should be; though the film’s performances strive to lift the thin material. Most are perfectly fine; with Sabrina Cofield considerably better than fine as Gail. Her performance is easily the most effective and affecting. (If I’m honest I had no idea she was called Gail, I had to check IMDB for that – all the way through she’s called LT, which I assume is a reference to her military rank.)

Her growing unease on waking up about what might have happened to her after a particularly gruesome hallucination (despite reassurances from her cellmates) is very believable, and I both wanted and expected her to last until the end (or possibly till just before the end, as this is a horror film).

I also liked Dimitri, a Russian, who is quietly suspicious of everyone else and is the first to really grasp what might be happening to their minds and their memories. Osipov adds a sense of backstory genuinely lived, without saying very much because of his character’s safety-requiring reticence. Though he does spend an awful lot of the film with a screwdriver trying to get into a control panel.

The aliens are – for now – on the other side of a heavy door, though soon escape from the base becomes essential.

Growling and glowing, they are initially glimpsed in dark shadows, a scaly hand creeping over a pipe; though as the film progresses we get several full shots of them. To be honest continuing the occasional glimpses might have worked better; I liked the alien suit but the other special effects aren’t great, and the sign that a human has been infected by an alien (if that is what is happening to them) looks a bit silly.

By the end I still wasn’t sure what the aliens were doing or why. They are evolving (a long quote from Charles Darwin starts the film) after being captured for their technology. But I didn’t know what they wanted with their human prey or what the apparent infection of humans (if that is what it is) actually does.

To be fair the movie is only about 70 minutes long, and in a year where 140 minutes seems to be becoming the norm, it doesn’t outstay its welcome. Unlike the aliens who’ve been here for decades but have turned into those houseguests-from-hell who re-stock your fridge to suit their diet, claim the comfiest chair and take control of the TV remote; before eating your pet bunny, changing the locks and claiming squatters rights.

Alien Domicile was made on a very low budget ($85,000 from what Google tells me) and director Kelly Schwarze has got quite a lot for his money, not least by casting Cofield.

The facility itself, once everyone’s out of that windowless room, lends itself to dark corners, dripping water, shadows and scares, but is large enough to induce panic about where to run to. I wasn’t bothered about what happened to most of the characters, though they are all identifiably different, helped by using such a small cast.

I was surprised who lasted til the last frames. And a final chase through a collapsing tunnel is effective, though the final twist seems to be a shock-value addition.

Unsurprisingly music is used to add tension – mostly it works, highlighting jump scares or adding a creepy ambience, though over-reliance makes some scenes too melodramatic.

There is some (not much) interesting gore, though it raises more questions than it answers. A second watch might make things clearer, but realistically I won’t be doing that.

It’s a common horror trope, but the funfair music that haunts the mind of one character raised the hairs on the back of my neck. (I am terrified of funfairs, clowns and roundabouts with those up-and-down horses though. I’m guessing in a previous life I was a Victorian urchin who tried to get on a carousel without paying my 2d and suffered a gruesome death under fake hooves.)

Despite my love of short-and-snappy movies, I’d actually have preferred it if the movie had been 10 minutes longer and more coherent in terms of what the aliens want, and are doing; the long cell-bound talky section offers scattergun themes, throwing out lots of ideas without adding a framework where we could join the dots of this story in a satisfying way.

This is a movie let down by its storyline. Even as a low-budget indie, it could have been so much more. But for its budget, there are some worthwhile scenes, as well as Cofield’s thoughtful and nuanced performance as LT, I mean Gail.